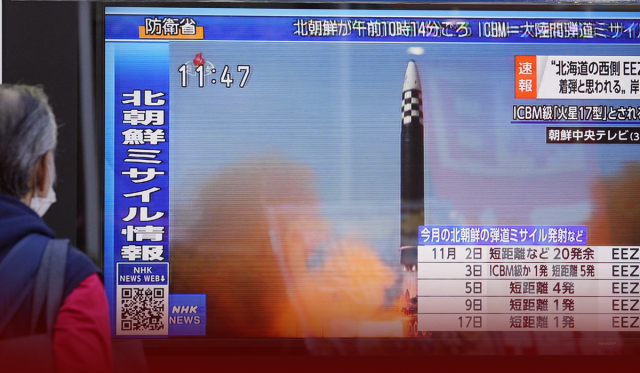 An intercontinental ballistic missile (ICBM) was launched by North Korea a day after it launched another smaller missile, thereby increasing its presence in the region and warning of “fiercer military responses” to the United States. In a statement, Japanese Defense Minister Yasukazu Hamada said that the missile could reach an altitude of 6,000 kilometers and travel as far as 15,000 kilometers, ensuring it could reach the American mainland.

Officials of the Japanese government reported that the test missile traveled 1,000 kilometers on a lofted trajectory and landed approximately 200 kilometers west of Oshima-Oshima island in Hokkaido’s northern prefecture. In Thailand, he is attending the Asia-Pacific Economic Cooperation summit meeting, where Japanese Prime Minister Fumio Kishida told reporters, “We lodge a strong protest against North Korea for its repeated provocations.” These remarks were broadcast live in Japan.

In addition, the defense ministry of South Korea described the missile as a possible intercontinental ballistic missile capable of carrying nuclear weapons. In response to the US moves to boost its armed presence in the region, North Korea released a short-range ballistic missile on Thursday, warning of “fiercer military responses.” Washington was engaging in a “gamble it will regret,” Choe Son Hui warned, saying the US was taking a “gamble it will regret.”

Choe issued a statement condemning the conclusion of a trilateral summit between South Korea, Japan, and the United States on Sunday, in which the leaders criticized Pyongyang’s missile tests and reiterated their commitment to greater cooperation in security matters. The North Korean government has conducted unprecedented ballistic missile tests in recent years, which are prohibited by UN resolutions concerning Pyongyang’s nuclear and missile programs. Moreover, the country may conduct a nuclear test soon, the first since 2017.

Professor Leif-Eric Easley, who teaches at Ewha University in Seoul, told Al Jazeera that there should be more countries that hold the North accountable for its actions. In his remarks, he noted that the North was developing illicit nuclear weapons and missiles, plotting a long-term conflict with its neighbors, and abusing human rights egregiously. In an e-mail, Easley stated that the country’s pariah state behavior represents a growing threat to Washington and its allies worldwide.

The leaders of South Korea, Japan, and the US were warned against conducting such a test last week during a meeting held on the sidelines of the East Asia Summit in Cambodia, and US President Joe Biden emphasized that Washington has committed to defending Seoul and Tokyo with its full range of weapons, including nuclear weapons. Furthermore, the leaders, including Fumio Kishida, the Japanese Prime Minister, and Yoon Suk-yeol, urged the formation of still-closer trilateral links in the security sphere and beyond, considering North Korea’s “unprecedented number of ballistic missile launches.”

Increasing weapon testing and rhetoric in the region have sparked alarm, with missile launches and joint military exercises conducted by the US, South Korea, and Japan in response. North Korea is reportedly trying to disrupt international collaboration against it by escalating military tensions and asserting that it can launch nuclear attacks on American cities, Leif-Eric Easley, associate professor of International Studies (IS) at Ewha Woman’s University in Seoul, said.

CNN reports that North Korea has launched missiles 34 times this year, sometimes firing multiple missiles on a single day. The North Korean tests this year included cruise and ballistic missiles, accounting for most of them. However, there are significant differences between both types of missiles. During the launch of a ballistic missile, the missile is propelled by a rocket outside the Earth’s atmosphere, then glides into space before re-entering the atmosphere and descending to its target, powered exclusively by gravity.

Additionally, cruise missiles are powered by jet engines, remain inside Earth’s atmosphere for most of their flight, and are controlled by aircraft controls. In his opinion, the presumed ICBM launch on Friday will not be seen as a message by Ankit Panda, a senior fellow at Carnegie Endowment for International Peace, but can be viewed as part of North Korea’s process of enhancing capabilities he deemed necessary for the modernization of their nuclear weapons. Satellite imagery shows activity at the nuclear test site, which has been a concern for the US and international observers for months. It would be the first time in five years that the hermit nation would conduct a nuclear test.