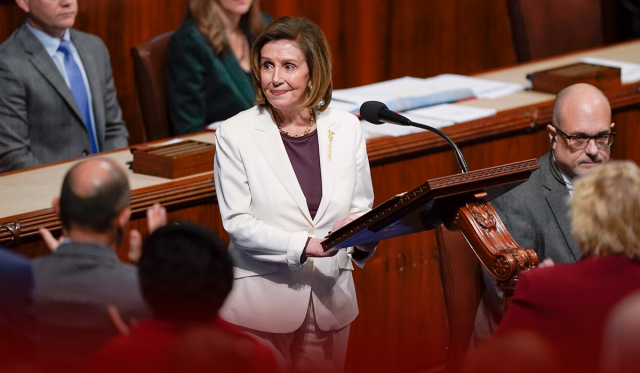 Nancy Pelosi, the first female to hold the position of House Speaker in the federal government, announced that she would decide not to seek re-election to her post. The announcement ends one of the most significant leadership tenures in the history of American politics. In a Thursday afternoon speech on the House floor, Pelosi stated that it is time for a new generation to lead the Democrats in Congress, a group she greatly respects. However, her position as a member of the House of Representatives will remain unchanged.

It is widely recognized that her decision not to seek re-election as the top Democrat in Congress’s lower chamber represents the culmination of a long and distinguished political career that has set the benchmark for how politics should be governed. Pelosi is generally regarded as the first female to be second in line to the U.S. presidency – two times- in the history of the Democratic Party. She made history by redefining the speakership and climbing the ranks of Democratic leadership.

Even when it took twisting her colleagues’ arms to get a bill passed, the former Speaker earned respect by voting on the party’s top priorities. In addition, she earned respect by gaining a reputation for amassing power despite male colleagues who sometimes undermined her opinions. Due to Pelosi’s ability to maintain order within her caucus, bipartisan opinion is that she is the only person who may be capable of taming the disparate factions within the Democratic Party.

Consequential Speaker of the House of Representatives

During the bitter battles over the Affordable Care Act in 2010, she led the House Democratic caucus to a razor-thin majority, enabling President Biden’s legislative agenda to pass several key measures. In a statement by the White House, the President congratulated Speaker Pelosi on her historic term in office. According to President Biden, she will be remembered as one of the most influential speakers in the United States House of Representatives history.

As she has demonstrated on numerous occasions, elected officials must uphold their oaths to God and the nation to preserve our democracy and inspire future generations. But unfortunately, Pelosi has stepped down, although it was somewhat expected. The former President announced in 2020 that she would not seek re-election to her leadership position, but she gave little information about her plans outside a small and highly loyal circle of confidants, and there were never any definitive details about what she planned to do.

A few weeks ago, she resigned from her position as Speaker of the House following the violent attack on Paul Pelosi, her husband, in their San Francisco home by an intruder seeking the Speaker. An interview with a television station reported that the attack on her husband significantly influenced Pelosi’s consideration of her decision. Her response to the violent attack in the discussion was that she felt guilty for the incident, as the intruder was searching for her.

Two people who knew the decision spoke on the condition of anonymity and stated that the chairman of the House Democratic Caucus, Representative Hakeem Jeffries, has decided to run for minority leader of the House. The 52-year-old Jeffries would be the first Black member of Congress to lead the Democratic Party and was long considered a potential successor when Pelosi retired. In addition, two additional candidates will be running for seats 2 and 3: Katherine M Clark (Mass) and Pete Aguilar (Calif).

Representative James E. Clyburn (S.C.) will continue in his role as assistant leader, which was previously third in line but has now been moved up to the fourth position in the leadership hierarchy. There have been private discussions between these four leaders regarding running for leadership positions or stepping down as Clyburn has done, but the intentions of Majority Leader Steny H Hoyer (Md) remain unclear. Immediately following Pelosi’s announcement, Hoyer announced he wouldn’t run for re-election and endorsed Jeffries for leadership.

As a child, Nancy Pelosi was brought into politics by her mother, Annunciata M. D’Alesandro, and her father, then-Representative Thomas D’Alesandro, who ultimately became mayor of Baltimore. Following her move to San Francisco in 1969, Pelosi maintained an active involvement in Democratic politics and quickly gained recognition as a member of the Democratic National Committee. Her success as a fundraiser began there, which has distinguished her as the Democratic member of the House who consistently raised the most funds for her colleagues’ re-election campaigns.

Pelosi received her endorsement in 1986 from Representative Sala Burton, whose husband, Representative Phillip Burton, mentored Pelosi before his passing and who gave her permission to conduct a congressional campaign in the event of her death if a special election were called. After holding the San Francisco Board of Supervisors seat for Harvey Milk for eight years, Pelosi was up against a field of thirteen candidates in her first – and last – competitive election. First, she defeated Harry Britt, a gay activist who succeeded Milk. Then, a few months after Burton’s term ended, the forty-seven-year-old mother of five successfully contested the election against Republican Harriet Ross.

Approximately a week after she was sworn into office, Pelosi was invited to dinner in Washington, where she met several young Democratic colleagues, including Senator Richard J Durbin (Ill), Senate majority whip; Senate majority leader Charles E Schumer; and former Senator Barbara Boxer. George Miller introduced Pelosi to them and boldly predicted that she would become the first woman to serve as House speaker. With the threat from China against Taiwan looming prominently in the minds of many in the Asian American community of San Francisco, it did not take Pelosi long to establish herself in the House of Representatives. She immediately made the issue a top priority for her and her constituents.

The Rise to U.S. House Speaker

After the Iraq and Afghanistan wars continued, Pelosi became one of the critics of the Bush administration ahead of his 2004 re-election campaign. The leadership of Bush is incompetent. Indeed, he is not a leader. In May 2004, she told the San Francisco Chronicle that he lacked judgment, experience, and knowledge of his chosen topics. It is not that the President has lacked leadership ability, but rather that he has yet to show any signs of it. Judgment is essential for leadership. It is necessary to possess knowledge and experience to make judgments. Neither does he.”

The loss of seats suffered by Democrats in 2006 and Bush’s re-election inspired Pelosi to aggressively campaign for a House majority retake in 2006. Pelosi opposed Bush’s proposal to reform Social Security and insisted her members join forces in opposition to his proposal. It was the first of many instances in which Pelosi was required to maintain unity within her caucus. Similarly, the Democratic Party began to distance itself from the war, mirroring popular opinion at the time and positioned itself as the party that supported withdrawal from the war.