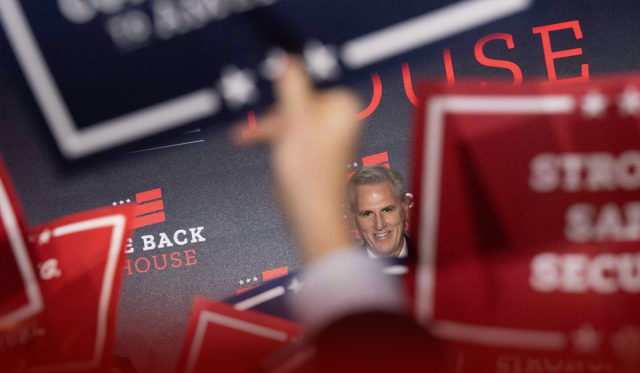 A Republican majority would have narrowed the Democrats’ chances of keeping control of the House and raised the prospect of a divided government this week, just one victory short of the 218 seats required for a majority. Democrats will control the Senate, with fifty seats secured and another senate seat potentially up for grabs in Georgia next month. During the election season, the Republicans needed just five seats to take control of the House.

The House of Representatives is poised to be under Republican control in the next session of Congress starting in January. In the 435-member House, GOP currently holds 212 seats to the Democrats’ 204. Both parties are seeking a 218-seat majority.#USSenate #Congress #Midterms2022 pic.twitter.com/SnAJ6wv2Gk

The midterm elections had ended nearly a week ago, giving conservatives leverage to boost investigations and blunt Biden’s agenda. There will, however, be immediate challenges for Republican leaders with a slim numerical advantage, making it difficult for them to govern. Moreover, it may still be several days or even weeks before the full scope of the majority is clear, as votes in competitive contests are still being counted. Despite this, the party was still on course to reach 218 seats, although it is still too early to guess the outcome of the seats in California and other states.

However, GOP will likely be able to hold the narrowest majority of the 21st century if they manage to achieve 218, even by just a few votes. The margin of victory could be comparable to the one Republicans held in 2001 when they held 221-212 seats with two independent votes. While that result is far from the sweeping victory GOP projected going into this year’s midterm elections, the party hoped to use economic challenges and President Biden’s waning popularity to reset Capitol Hill’s agenda.

From Virginia to Minnesota and Kansas, Democrats were able to broadly blunt a big Republican victory expected in the upcoming election. Consequently, the results may complicate Republican leader Kevin McCarthy’s plans to become the speaker of the House since some conservative members are uncertain whether to support him. A narrow margin has upended Republican politics, and finger-pointing has resulted over what went wrong. Some Republicans have pointed the finger at Donald Trump for the disappointing results. In this year’s primaries, the former president helped candidates who struggled during the general election to win.

He is likely to announce a third presidential bid on Tuesday. Even though the Republican Party had an underwhelming poll, it will still be able to increase its influence in Washington. It is anticipated that Republicans will soon gain control of the House committees, allowing them to shape legislation and conduct investigations into President Biden, his family, and his administration. Analyses are being conducted into the overseas business dealings of Hunter Biden, the president’s son. Several conservative lawmakers have raised the possibility of impeaching Biden, but the party will have difficulty enforcing that action due to a tight majority.

Senate Republicans will often be able to derail legislation championed by the GOP if it emerges from the House due to the narrow Democratic majority. Legislative chaos can occur due to such a thin majority in the House. Essentially, the dynamic gives individual members significant influence over the outcome of the chamber’s proceedings. The GOP leaders may find themselves in challenging circumstances as they try to secure support for government funding or debt ceiling increases that must be passed.

Considering that the Republicans went into the election with congressional maps redrawn by Republican legislatures, it was shocking that they failed to make further gains. Also on the GOP’s side was history: During nearly every new president’s first midterm election of the modern era, the political party that holds the White House has usually lost seats in the House of Representatives. Suppose McCarthy is elected to succeed Nancy Pelosi. In that case, he will lead a rowdy conference of House Republicans, many of whom are committed to Trump’s bare-knuckle political style.

Although election officials, courts, and even Trump’s attorney general refuted claims of widespread fraud in the 2020 presidential election, many GOP leaders in the incoming Congress rejected the results. During the first national election since the January 6 mob attack, Derrick Van Orden, a Republican outside the U.S. Capitol on the day of the attack, was elected to the House of Representatives. In Wisconsin, he won a seat previously held by a Democrat.

Republican candidates pledged to reduce taxes and strengthen border security during the midterm campaign. Furthermore, Republican lawmakers may withhold aid from Ukraine while it engages in a war with Russia or uses the threat of defaulting on its debt as leverage to impose cuts in social spending and entitlements. However, given the small GOP majority, all such pursuits may be more challenging. Biden spent a considerable amount of his career as a legislator and vice president negotiating legislative compromises with Republicans.

However, while president, he made it clear what he believed the current Republican Party posed as a threat. The midterm election demonstrated that voters want Democrats and Republicans to cooperate and govern jointly. Still, Biden also pointed out that Republicans failed to achieve the electoral surge they had hoped for. “I will not change anything fundamentally,” Biden stated. President Biden has also been blunt in his assessment of his party’s dwindling chances, saying that he believes it will be very close but that the GOP will not be able to win the House.

Which party will govern Senate and the House?

Last weekend, the Democrats gained their 50th seat in the Senate, retaining a little control over the chamber. As the chamber’s presiding officer, the vice president, Harris, could cast a tie-breaking vote on controversial legislation when faced with unified Republican opposition. Now, Democrats hold a 50-49 advantage in the Senate, but Democratic Senator Raphael Warnock will face a runoff election in Georgia on December 6 to decide the remaining Senate seats against his GOP opponent, former professional football player Herschel Walker.

Most U.S. political analysts have predicted that Republicans will win a narrow majority when the remaining polls are counted in the uncalled House contests, perhaps 219 – 222 seats to 216 – 213 seats for Democrats, a much smaller majority than GOP leaders predicted before the election. There was a widespread expectation among U.S. political pollsters and analysts in the runup to last Tuesday’s election of a broad “red wave” of Republican victories in the House and the possibility of a Republican takeover of the Senate.

The Democratic Senator, Chuck Schumer, hailed the results as “a vindication” for the Democratic agenda and the office of majority leader. Several Republican candidates, including some who erroneously claimed that then-President Donald Trump had been cheated, failed to turn off voters through extremism and “negativity.” “Americans demonstrated their belief in democracy,” Schumer told the press.