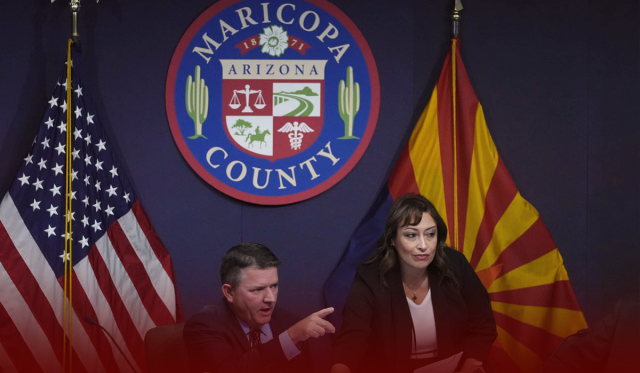 Although there was no evidence of irregularities in the number of votes cast, a Republican County official in rural Arizona refused to certify the results of the November election. A state election official swiftly filed for a judicial review of the decision. In southeastern Arizona, Cochise County has declined to certify, following pressure from prominent Republicans to reject results that show Democratic candidates winning the most seats.

Republican officials in a rural Arizona County refused to certify the results of the midterm election of 2022 despite the lack of any evidence to support the discrepancy. The state’s top election official immediately challenged the decision in court.#ArizonaElection #Republicans pic.twitter.com/iSOXI7WrTx

A judge ordered that county officials canvass the election, as required by Arizona law after Democrat Katie Hobbs narrowly won the governor’s race. On Monday, Cochise County retirees and their lawyers filed a similar lawsuit as the deadline for counties to publish their official vote counts approached. A delay in the canvass vote has been implemented due to concerns regarding the certification of ballot tabulators. However, election officials have repeatedly claimed that the equipment is acceptable during elections.

The Director of State Elections, Kori Lorick, wrote this week that Hobbs must approve the statewide canvass by next week and that if they are not received by that date, the results should be disregarded. As a result, a Democrat could win at least two close races – a seat in the US House of Representatives and the state school chief post. In Hobbs’ lawsuit, he is seeking an order from the Superior Court of Cochise County requiring that officials certify by Thursday.

If the election were not certified, the will of all the county’s voters would be undermined, “and further confusion and doubt would be created about Arizona’s election system,” the lawyers for Hobbs wrote. “Unfortunately, the Board of Supervisors failed to fulfill their responsibility in protecting the Cochise voters when they had access to all the information they needed to certify this election,” Sophia Solis, a Hobbs spokeswoman, stated in an email.

Arizona law requires county supervisors to approve election canvassing, and attorneys have advised Republican supervisors that they could face criminal charges if they fail to fulfill their responsibilities. Most jurisdictions across the country have certified election results without issue. In Arizona, however, those efforts have not been successful, as former President Donald Trump and his allies attempted to overturn the 2020 election and spread false information about fraud.

The election results in a northeastern Pennsylvania county could not be certified Monday because paper shortages caused problems with the ballots on Election Day. The county’s election officials deadlocked Monday on whether to inform the state of the official vote tallies, effectively preventing the results from being certified. The Republican Party has long been a stronghold in Arizona, but Democrats have won most of the high-profile races this month over Republicans who have aggressively promoted President Trump’s false statements.

Hobbs’ opponent in the governor’s race, Kari Lake, and the Republican candidate for secretary of state, Mark Finchem, have refused to accept their defeats. In addition, several ballot printers have been reported to be malfunctioning in Maricopa County, the largest in the state, which encompasses metropolitan Phoenix. It is being attributed to Republican elected officials. However, Maricopa County officials reported that all legal ballots were counted, and everyone had an opportunity to vote.

On Monday, Navajo County, a rural county with strong Republican leanings, and Coconino County, a staunchly Democratic County, voted to certify. Despite their misgivings and hundreds of speakers urging them not to canvass the results in conservative Mohave and Yavapai counties, the supervisors voted to canvass the results. Another delay would only prolong the agony without bringing about any improvement,” said Mohave County Supervisor Hildy Angius, a Republican. A protest against Maricopa County’s voting issues caused the county to postpone its certification vote last week.

Democrat supervisors in Cochise County have abandoned plans to count ballots by hand, which has been ruled unconstitutional by the courts. Instead, they have requested that the secretary of state verify the voting machines were legally certified before approving the election results. In response to those concerns, they said they would like to hear from you again on Monday. During the election, Lake noted that some voting centers in Maricopa County printed ballots with too light markings to be read by the on-site tabulators on Election Day. Due to the confusion, there was a backlog in the voting lines, and it is still being determined how many of Lake’s supporters still need to vote.

In a suit filed on Monday, Katie Hobbs, the secretary of state and Democrat who won the governor’s race by a narrow margin, requested an order requiring county officials to canvass the election, as required by Arizona law. An attorney is representing a voter in Cochise County, and a similar suit filed yesterday, a group of retirees, the deadline for counties to authorize the official tally of votes known as a canvass.

While election officials have repeatedly stated that the ballot tabulators are appropriately approved, two GOP County supervisors have delayed the canvass vote until they have a chance to hear once again from election officials about concerns about the certification of the equipment. Moreover, she filed a public records lawsuit seeking documents regarding this matter before the county voted to certify the election on Monday. Attorney General Mark Brnovich, a Republican, has also demanded clarification before a vote can be taken.

A county representative said on Sunday that nobody was prevented from voting, and the lines at 85% of voting centers never exceeded 45 minutes. County officials reported that most long-lined polling stations had others nearby with shorter waiting times. Kelli Ward, the Republican party chair, has been accused of sowing confusion by informing supporters that their ballots would not be tabulated in a secure box at county election offices later in the process, as more sophisticated machines would tabulate them.

Approximately 17,000 ballots were deposited in those secure boxes on Election Day, and all were counted. County officials stated that the problem was widespread throughout the county, contrary to Lake’s allegations that the problem was confined to Republican areas. While most ballots on Election Day in Maricopa County went to Republicans, only sixteen percent were cast in person.