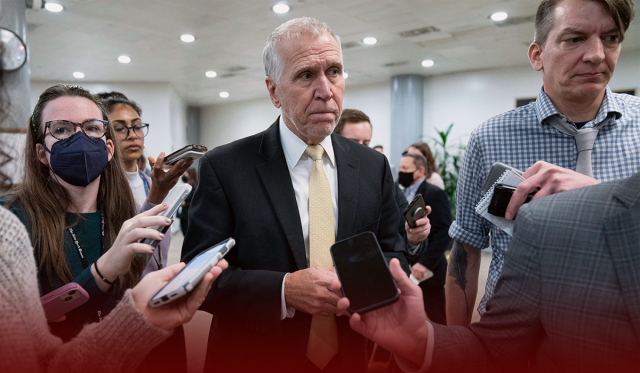 As Senator Susan Collins of Maine tended to her Thanksgiving turkey, she received a call from Senator Thom Tillis of North Carolina. He shared with her an update on their joint effort to secure support from other GOP senators for their bipartisan bill to safeguard the rights of same-sex couples who are married. “He never stops pushing for it,” Collins said of Tillis. Though her husband urged her to end the call and enjoy Thanksgiving, their hard work paid off less than a week later when the bill passed with the support of 12 Republican senators.

Sen. Susan Collins was busy basting her Thanksgiving turkey when she received a call from Sen. Thom Tillis, who had an important update to share. He had made significant strides in their efforts to convince more Senate Republicans to support their bipartisan bill.#ThomTillis pic.twitter.com/mukQv1EteH

Throughout the past year, Tillis has stealthily positioned himself at the center of several high-profile bipartisan initiatives in the Senate. Despite the chamber being evenly divided, he has been a driving force behind negotiations for legislation on contentious topics such as gay rights, firearms, and immigration, without drawing a lot of public notice. Collins credited Tillis’s dedication and ability to gauge the support of his colleagues for the bill’s success, calling him “a master at counting votes.

Tillis’s Willingness to Compromise in a Polarized Political Climate

Tackling legislation on gay rights, firearms and immigration is a delicate balancing act that many Republicans fear would result in primary challenges from the right. However, Tillis’s inclination towards finding common ground despite the potential political backlash is seen as vital by his colleagues. With a significant number of lawmakers who were open to compromise having retired, the chamber is in dire need of legislators like Tillis to bridge the gap with the narrow and divided House Republican majority, which recently had difficulty in electing a speaker.

“I see him filling a gap that was created by the retirement of several influential Republican senators,” Collins said, citing the loss of Republican senators Rob Portman of Ohio, Roy Blunt of Missouri, Richard C. Shelby of Alabama, and Richard Burr of North Carolina, who played a key role in forging compromise to keep the government running. A group of conservative House Republicans has obtained promises from newly elected Speaker Kevin McCarthy of California that increase the probability of conflicts over raising the debt ceiling and government funding next year, which puts more stress on the diminishing number of legislators like Tillis, who possess the ability to reach a compromise.

“The departure of senators like Rob Portman is a cause for concern,” said Senator Chris Murphy of Connecticut. “I hope legislators such as Thom Tillis will step up and help the Senate function effectively.” But Tillis, an ex-management consultant who joined local politics twenty years ago and later quickly gained high positions in the North Carolina State Legislative Building to become its speaker, refutes the term “dealmaker” and instead accentuates the conservative principles he has instilled in the legislation he has been involved in.

He explains that his choice to negotiate compromise is motivated not by a desire for moderation but rather by disappointment with the failure of some of his colleagues to collaborate effectively. Moreover, Tillis selects the issues he engages with cautiously, considering the potential impact on his political career. “I don’t subscribe to the idea that we should all come together and be in harmony, the notion of being bipartisan at all costs,” Tillis stated in an interview with The Washington Post. “I believe in being bipartisan on a case-by-case basis. Constantly being bipartisan means you have abandoned your fundamental beliefs and values.”

Despite his views, Tillis has played a role in a majority of bipartisan legislation that has come out of the Senate in the past eighteen months. His involvement ranges from the $1 trillion infrastructure bill to the Bipartisan Safer Communities Act, which expanded background checks for some gun buyers, passed after the school shooting in Uvalde, Texas. Additionally, he was involved in the Electoral Count Act, which modernizes the presidential certification process to prevent a repetition of President Donald Trump’s pressure on his vice president, Mike Pence.

Murphy, who collaborated with Tillis on the first major gun legislation passed by the chamber in 30 years, noted that Tillis had a natural understanding of what would persuade individual Republican senators to support the legislation, enabling the negotiation team to proceed swiftly. This ability was developed during his tenure as a speaker in North Carolina. “Thom was constantly in contact with his colleagues,” Murphy said. “During breaks in our negotiations, I observed him walking around the Senate floor, engaging in discussions with various Republican senators, assessing what proposals could secure sixty votes and what could not.”

When working on legislation, Tillis maintains an overview of his colleagues’ positions by jotting notes on a large index card that he carries in his pocket, Collins said. He makes a note of which votes are attainable and what is required to secure them. When working on the gun bill, Tillis quickly realized that a provision prohibiting the purchase of assault weapons by individuals under 21 would not receive the 10 Republican votes required for the bill to pass, enabling the negotiation team to focus on other elements.