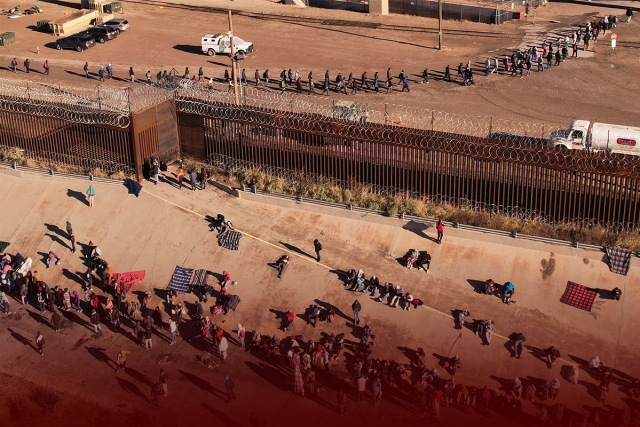 In a recent ruling, the U.S. Supreme Court has held up the termination of a Trump administration policy that has prevented thousands of people from crossing the US-Mexico border. When the controversial policy is implemented, the number of attempted migrant crossings is expected to spike. Specifically, Title 42 allows the government to expel undocumented immigrants who seek entry to the United States. Efforts were made to contain the spread of Coronavirus by implementing this policy.

Several million migrants have been prevented from entering the US by a federal directive that has been in effect since the pandemic-era border policy ended on Wednesday. The Supreme Court has issued an order that may prevent that policy’s end from occurring as planned.#Title42 pic.twitter.com/27Yjyj6gnh

Chief Supreme Court Justice John Roberts blocked the policy’s termination two days before its expiration date as the court examined an emergency appeal from several Republican-led states requesting that it continue into 2013. Consequently, the Biden administration faces a major political challenge since its opponents have strongly criticized its handling of border issues.

In the fiscal year ending on 30 September 2022, more than two million migrants were detained at the border, representing a significant increase over the previous fiscal year. In addition, during the last months, hundreds of thousands of migrants have been arrested at the border. Compared with last year, the number has increased by 24%. According to the statistics, Venezuelan, Nicaraguan, and Cuban migrants have risen substantially in the past year, but Mexican and Central American migrants from El Salvador, Guatemala, and Honduras have decreased.

Why the recent spike in the number of migrants?

Since the president assumed office in late January 2021, the number of migrants arriving at the border has dramatically increased. In El Salvador, Guatemala, and Honduras, environmental disasters and economic problems have been cited as reasons for the increase in cases. The economic challenges have been compounded by political repression in other countries, such as Cuba, Nicaragua, and Venezuela.

Moreover, according to experts, Latin American economic problems are continuing due to pandemic-related repeat crossings. Adam Isaacson of the Washington Office on Latin America commented that desperation had reached an all-time high. Smugglers take advantage of the fact that several countries that did not send migrants in significant numbers previously are now among the top sending countries for migrants, largely due to a lack of economic opportunities. They make the most of that.”

In recent years, many migrants have been seeking asylum, a process that the previous United States administration of Republican Trump severely restricted. The record influx at the southern border has also been attributed to President Biden’s proposal to offer citizenship to millions of undocumented Americans.

Mexican migrants and those from the Northern Triangle countries – Guatemala, El Salvador, and Honduras – continue to make up most of the detainees, accounting for almost 744,000 in the fiscal year 2022 alone. The Customs and Border Protection figures highlight, however, shifting migration patterns. According to estimates, nearly 70,000 people from Venezuela, Cuba, and Nicaragua were detained at the border in October, an increase of 149% over October 2021.

Mexico, El Salvador, Guatemala, and Honduras, on the other hand, saw a decline of 12% to just under 61,000 from October 2021. During the 2022 fiscal year, Venezuelans, Cubans, and Nicaraguans accounted for approximately 494,000 migrant detentions. Ariel Ruiz, an expert with the Migration Policy Institute in Washington, DC, explained that because of the links between countries, there is also an increase in asylum claims from each country.

Since Venezuela lost much of its aid prior to the pandemic, Cuba is experiencing more economic difficulties. However, Nicaragua’s decision to eliminate visa requirements for Cubans last year has provided them with a starting point from which to commence their journey to the United States. Unfortunately, because the United States does not maintain diplomatic relations with these countries, it is also impossible for them to be repatriated.

Ruiz explained that we have a system of border enforcement explicitly designed to address Mexican migration. In some ways, all these policies have combined to create an opportunity in which migrants are able to move northward as economic conditions in these countries worsen and political repression increases. On the other hand, Biden has stated that returning migrants to Nicaragua, Cuba, or Venezuela is “unreasonable” and that he is working with Mexico and other countries to “halt the flow.”

An agreement between U.S. and Mexican officials was reached in mid-October under which the U.S. would expel Venezuelans while simultaneously permitting humanitarian access by air to them. As a result, there is no longer a legal pathway available to Venezuelans who attempt to cross the border but are detained. It has been reported that since the plan was implemented, there has been a decrease of 1,100 to 300 daily encounters with Venezuelan migrants.

19 Republican-led states applied to postpone the end of Title 42 until the end of this year, but a federal appeals court dismissed their request last week. Earlier this week, the Supreme Court heard a legal challenge by Republican state officials. It is led by Chief Justice John Roberts, the court’s most conservative member. While the Supreme Court decided whether to hear the case, he temporarily stayed the lower court’s ruling.

The Biden administration had stated in a separate court filing that it would officially halt the expulsions by noon on Wednesday, per the court’s deadline. Additionally, the US DHS announced in response to the Supreme Court’s order that it would continue to prepare to manage the border orderly, safely, and humanely when the Title 42 public health order is lifted.

Title 42 was ruled unfair and capricious by a federal judge in November, and the expulsions were ordered to stop by 21 December. However, the policy does not prevent migrants from making multiple attempts to cross the border, which might be one of the reasons why Title 42 caused migrant numbers to rise. During the pandemic, CBP stated that “a significant number of expulsions contributed to an increase in the number of migrants who attempted multiple border crossings.”

Isaacson’s policy is causing statistical “distortions.” It is easy for people to try repeatedly since Title 42 has made it possible for them to do so. Imposing any real sanctions is impossible if they continue to be caught. Statistically, Mexican citizens are more likely than those from Honduras, Guatemala, and El Salvador to be repatriated back to Mexico. The United States sent back more than 962,000 citizens of these countries using Title 42 in the fiscal year 2022, whereas Nicaragua, Cuba, and Venezuela sent back less than ten thousand.

A Political Issue for President Biden

A growing number of migrants presents a political problem for the Biden administration, placing him at odds with Republican-controlled regions. Several Republican-run states, including Texas, Arizona, and Florida, have introduced initiatives to relocate migrants to Democratic-run states. It has been found that some of these initiatives result in immigrants being left in high-profile areas, for example, near the residence of Vice President Kamala Harris in Washington or on Martha’s Vineyard.

Local officials in these states claim that the tactic is intended to mitigate the impact of migration flows on their communities. For instance, Florida Governor Ron DeSantis – who flew a group of migrants to Massachusetts in September – expressed his concern that “the minute even a small fraction of the problems border towns faces every day is brought to the door of these towns, Democrats go berserk.”