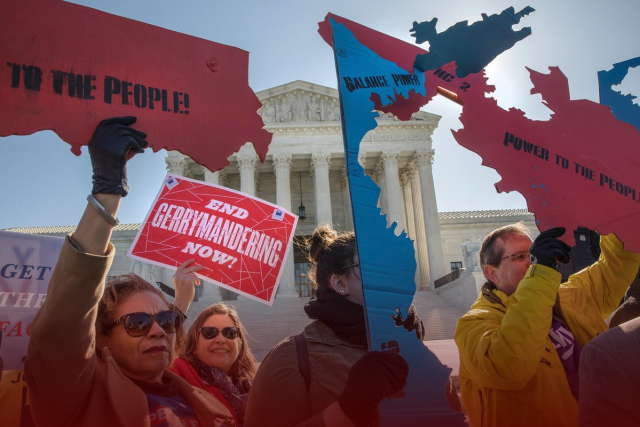 On Wednesday, the conservative majority of the United States Supreme Court appeared to be prepared to limit judicial authority to overturn voting policies crafted by state politicians. However, Republican North Carolina lawmakers may not reach as far as they hoped in a case depicted by liberal justices as a threat to American democratic norms. So the state legislature argued in a case in which it attempted to persuade the judges to endorse an alternative legal theory that has gained popularity in conservative legal circles.

The conservative majority of the US Supreme Court seemed prepared to limit judicial power to overrule state politics. But the liberal justices painted the case as a threat to American democratic norms, so Republican lawmakers may not get as far as they want.#USSupremeCourt #USA pic.twitter.com/xpuY0kkgs5

Based on this legal theory, state courts would not have the authority to review the legal validity of actions taken by state legislatures that regulate federal elections. For example, in an appeal to the top court of North Carolina, Republican legislators are challenging the ruling that throws out their map for the 14 congressional districts as unlawfully biased against Democratic voters. After that, a state court replaced the map with one drawn by an expert group composed of members of both political parties.

Currently, the Supreme Court has a conservative majority of 6-3, and most of the conservative justices on the court, including Samuel Alito, Clarence Thomas, and Neil Gorsuch, have expressed a willingness to accept the “independent state legislature” doctrine advanced by Republican legislators. The conservative justices generally expressed skepticism about the state court’s actions. However, some pointed out that the GOP argument that state constitutions can impede the power of state legislatures to set rules for congressional and presidential elections might be overstated.

Under the now widely accepted legal theory, state legislatures – not others such as state courts – are responsible for setting election rules and drawing electoral districts under the United States Constitution. Liberal justices of the court suggested that the doctrine might allow legislatures to adopt any voting restrictions. However, by enabling voting rules to differentiate between state and federal contests, lawyers opposing this amendment also claimed it would create confusion.

Justice Elena Kagan said that this proposal would eliminate the usual checks and balances on how big governmental decisions are made in the U.S.” It is reasonable to believe that it eliminates all those checks and balances at precisely the right time. For example, the issue of voting rights is contentious in America. Several GOP-led state legislatures have introduced new voting restrictions following the false claims made by Trump that the last presidential election was stolen from him by widespread electoral manipulation.

A verdict by the court by the end of June may apply to elections in 2024, including the election for the presidency of the United States. During the three-hour argument, the justices debated whether the federal courts could review state court actions so that judges are not acting as legislators or applying vague state constitutional provisions unfairly, such as those requiring free and fair elections that disempower legislators. Considering such widely phrased provisions, the Chief Justice of the United States, John Roberts, a conservative, questioned whether such provisions provide the states’ courts with appropriate “standards and guidelines.”

In a resounding rejection of the Republican argument, Alito stated that legislatures wouldn’t be checked if the Republican position prevailed. “In any case, regardless of what we define the Election Clause to mean, Congress may always establish how congressional elections are to be conducted,” Alito declared, referring to the Constitution’s provisions on elections. It is derived partly from the Constitution’s statement that “the legislature of each state shall prescribe times, places, and manners of federal elections.” Republicans argued that the state court usurped the authority of the General Assembly of North Carolina in regulating federal elections.

Using this theory, Kagan said, state legislators could engage in “adversity gerrymandering” – drawing electoral districts that unfairly favor a party’s chances of winning elections – and enact “all manner of voter restrictions,” pointing out that lawmakers may be compelled to suppress, dilute, and negate votes while coveting re-election. Kagan added that the theory could also allow legislators to determine the winners of federal elections, a sensitive issue following the attack by supporters of Trump on January 6, 2021, to obstruct congressional certification of Biden’s election victory.

It appeared that some conservative justices were uncomfortable with certain aspects of the arguments made by the Republicans. “The constitutions of nearly all states regulate federal elections in some way,” Justice Brett Kavanaugh stressed. Added a state governor’s veto to the legislative check on a legislature’s power undermined Roberts’ argument that it could do whatever it wanted. During his argument for the North Carolina legislators, David Thompson argued that the Constitution mandates state legislatures to impose regulations for federal elections as a national function.

States cannot restrict their substantive discretion as long as the legislature performs this federal function.” During a conversation with Thompson, Kavanaugh said his viewpoint on the theory’s breadth “seems to go beyond” what was conceived by the then-Chief Justice William Rehnquist in a consensus to a 2000 ruling determining the outcome of a presidential election – the opinion that the state courts had overstepped their authority in federal elections.

A coalition of voters and voting rights organizations challenged the map adopted by the legislature in November 2021, with the assistance of the North Carolina Department of Justice in February 2019. The administration of Democratic President Joe Biden supports their efforts. Prelogar, arguing for Biden’s administration, claimed that the Republicans’ proposal for empowering state legislatures would “wreak havoc on election administration across the nation” and would lead to a flood of lawsuits related to state-administered elections in the federal courts.

A Democratic legislator arguing for Biden’s administration, Elizabeth Prelogar, said it would “wreak havoc” on the management of elections across the country if state legislative powers were given to them in the manner that Republican legislators seek. In her opinion, this would lead to a flood of lawsuits asking the federal courts to intervene in elections administered by states.

Lawyer Neal Katyal, representing North Carolina Common Cause and the League of Conservation Voters, asserted that the lawmakers’ theory contradicts the historical record. In addition, the court can create chaos for voters if they accept the case if one set of rules is applied to federal elections and another to state elections. Finally, the judge warned of a possible “blast radius” if the Supreme Court accepted the case.

The Biden administration opposed a theory of independent state legislatures. The Solicitor General stated that preexisting precedents, texts, and practices support the view that the Elections Clause does not negate the role of state courts in regulating state laws. In her opinion, if this theory were to be adopted, it would disrupt the administration of elections in all parts of the country.