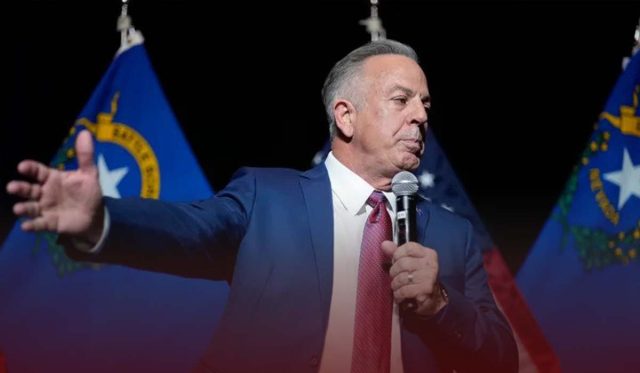 Republican Joe Lombardo has ousted Democrat Steve Sisolak in Nevada, one of the few governorship elections presently considered a toss-up between the two major parties, Edison Research estimated on Friday. During his campaign, Lombardo, a former soldier, and the Clark County sheriff, emphasized his support for law enforcement and his goal of reducing government spending. In his speech, Sisolak stressed the importance of protecting abortion rights.

While many of the unsuccessful Republicans seeking governor in presidential battleground states this year have rejected widespread fraud in the 2020 election, Lombardo has rejected the false claims of former Republican President Donald Trump concerning widespread 2020 election fraud. The campaign released a statement in October praising Trump’s immigration, fiscal, and energy policies in May, and in May, Lombardo called receiving Trump’s endorsement an honor.

In his campaign for re-election, Sisolak stressed the importance of protecting the right to abortion, education, expanded childcare, and access to affordable housing. Over the week, both campaigns remained largely silent regarding the vote-counting process. Election officials must count mail ballots received by Friday if they were postmarked by Tuesday. Rejected ballots must be corrected by Monday for voters whose ballots were rejected.

After joining the Las Vegas Metropolitan Police Department in 1988, Lombardo, 60, tenure as Clark County Sheriff spanned two terms, the nonpartisan elected head of the state’s largest police agency. During the campaign, he coped with attacks regarding crime increases during the last two years by blaming funding limitations and rules imposed by the Democratic-controlled legislature. In his general election campaign, Lombardo, who was elected from a crowded Republican primary field, relied on a public health insurance alternative passed by the state legislature and signed by Sisolak and said he approached abortion from a “pro-life standpoint.”

It should be noted that he acknowledged that Nevada voters approved a law in 1990 that permits abortions until 24 weeks of pregnancy. Regarding this law, he said, “the governor has no power to change it.” He promised to deliver a victory speech at the high school where he graduated and stated that he and his wife, Donna, could not wait to begin working in Carson City for the state.

During the five years following the deadliest mass shooting in modern United States history, both Sisolak and Lombardo were in the national spotlight. The shooting of assault-style rifles from the windows of a high-rise hotel into a crowd of outdoor concertgoers resulted in the deaths of at least 58 people and the injuries of hundreds. The late Sisolak served as chairman of the Clark County Commission in 1988, the elected body responsible for overseeing the Las Vegas Strip.

On the other hand, the Las Vegas Metropolitan Police Department was headed by Sheriff Lombardo, a nonpartisan elected official from Clark County. The following year, Sisolak became the 30th governor of Nevada. The election of Lombardo will be Sisolak’s 31st, making him a one-term Democrat after 20 years of Republican rule. Although Democrats will control the state legislature, Lombardo will not have an easy time.