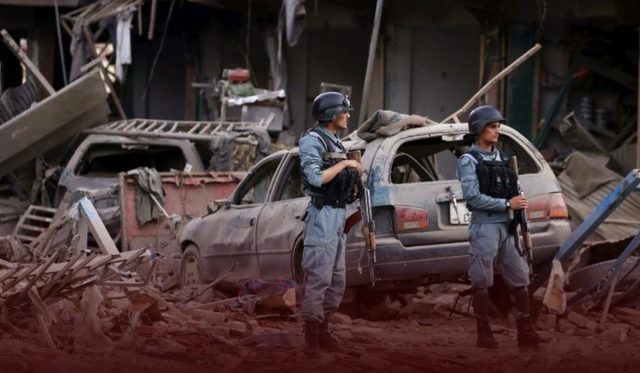 Afghan officials said that powerful blasts after rare gunfire hit Kabul, the Afghanistan capital, near the heavily fortified Green Zone of the city. It is an area home to foreign embassies and government buildings. According to a senior security official, the initial blast struck at 15:30 GMT (08:00 pm local time) in a car. Whereas the target of the blast was the home of the acting Defense Minister Bismillah Mohammadi and the neighboring residence of a member of parliament.

After yesterday’s bomb attack, Mohammadi said that luckily, he and his family member remained harmless, but some of his guards got injuries. Mirwais Stanekzai, the spokesperson of the Interior Minister, said that assassins enter the zone after the first explosion. According to him, the security personnel killed three attackers, and the police force conducted the clean-up operation. They also closed all roads leading to the house of the minister and guesthouse.

There was another loud bomb blast heard in Kabul, followed by instant gunfire just less than two hours after the car bomb blasted. A spokesperson for the Kabul police chief, Ferdaws Faramarz, said that hundreds of citizens in the targeted area moved to safe places. Subsequently, the security personnel was searching home to home, seeking possible hidden attackers in the area. Dastgir Nazari, the spokesperson of the Health Ministry, said that the blasts wounded at least ten people, and the rescue workers took them to hospitals.

Who was behind the Kabul blasts?

In a tweet, the Emergency Hospital of the city said that until now, it received six wounded people in the first attack. At the moment, no group claimed responsibility for the bomb attacks. The attacks came some days after the United States President Joe Biden announced the complete withdrawal of the troops until 31st August. The United States said on Tuesday that the blast bears the trademarks of the Taliban and that one of several concerns of Washington about Afghanistan is that the country could spiral into civil war.

Clashes between the Taliban and Afghan forces in Afghanistan took the fire in early May after the U.S. forces started evacuating their Afghan bases after twenty years of war in the country. Furthermore, the Taliban group gained control over trading posts, checkpoints of the districts, and infrastructure projects.

On Tuesday, Afghan government forces requested the citizens of Lashkar Gah to leave their homes. They also appealed to them to stay away from areas where the Taliban took control because they intended to launch combat operations against the terrorist group. A few days before, the Taliban seized many Lashkar Gah districts, a city having a key strategic position in all directions.

The loss of Lashkar Gah would be a big strategic loss for the Afghan government, which sworn to defend strategic centers of the country after losing many rural areas to the Taliban in the last some months.