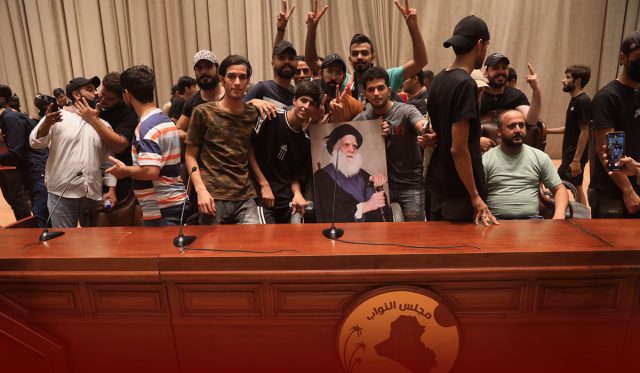 Al-Sadr’s party resigned from the ruling body last month following months of political deadlock, with over 70 lawmakers leaving as part of the show of force. Sadr’s attempts to form a government have failed throughout the past year amid opposition from rival blocs; a new government has yet to be created since October parliamentary elections.

Protesters broke into the heavily fortified Green Zone after a rival bloc nominated a prime minister from a rival bloc. Most of the demonstrators are supporters of Iraqi Shia leader Muqtada al-Sadr. In the capital’s high-security Green Zone, no lawmakers were present at that time pic.twitter.com/C0yfZV8zb6

It has been reported that police used tear gas and water cannons against protesters. There were no lawmakers present at the time. The group penetrated the area around Baghdad’s Green Zone, where several of the capital city’s most important buildings are located, including embassies.

It initially appeared that the security forces had stopped the intruders, but then they “flooded the parliament,” the AFP reported. Finally, during a song, dance, and lying on the tables, current Iraqi PM Mustafa al-Kadhimi instructed the protesters to leave the building. In the nine months following the unrest, the country’s different political factions stalled in their efforts to form a new government because of disputes between them.

What are the causes of the protests?

As a result of the election held in October, Sadr’s nationalist Saeroun movement was declared victorious. Sadr desires to end the US and Iranian influence over Iraq’s internal affairs. Sadr has refused to work with his rivals since then, making it impossible to form a new coalition government. In addition, Sadr and his supporters opposed Mohammad al-Sudani’s nomination for Iraqi prime minister because they believed he was close to Iran.

Despite the oil-rich status, the Wednesday scenes served as a reminder of the several crises faced by Iraq. Furthermore, mass protests erupted in 2019 due to public anger over unemployment, corruption, and the public services state. According to Human Rights Watch (HRW), the security forces killed hundreds of people then. During the 2016 unrest, Sadr’s supporters managed another parliament break-in.

Last year, the group of Al-Sadr won seventy-three seats in the October election, making it the leading faction in the 329-seat parliament. However, since the election, dialogs to form a new government have been delayed, and Sadr resigned from the political process. On Wednesday, demonstrators carried portraits of the Shia leader. Earlier, police used water cannons to oppose protestors and pulled down cement walls by blasting. However, several demonstrators penetrated through the gates to reach the area.