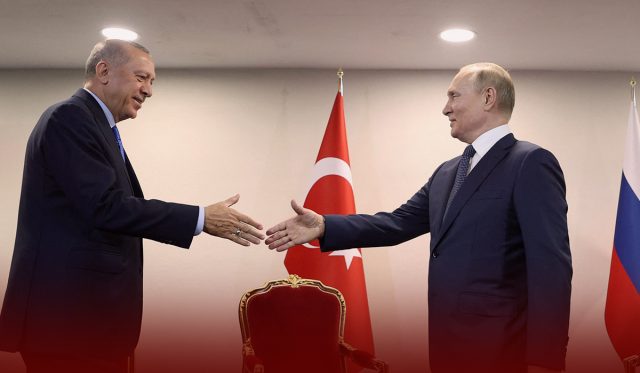 Tayyip Erdogan, the President of Tukey, plans to meet Russian President Vladimir Putin in the Russian Black Sea resort Sochi. A just-finalized agreement on freeing up Ukrainian grain. Russian support for new Turkish aggression against Syrian forces will be on the agenda. Erdogan’s today dialog with Putin will be the second time both leaders have met in one month.

Russian President Vladimir Putin and Turkish President Recep Tayyip Erdogan will meet today in Sochi after brokering a grain shipment deal between Russia and Ukraine. It will be the second meeting between both leaders in one month#vladimirputin #tayyiperdogan #PutinErdoganMeeing pic.twitter.com/oBrZW02eY1

Furthermore, the meetup between both leaders comes just after the first cargo ship carrying Ukrainian grain left the Black Sea under a United Nations-Turkey-brokered deal between Russian and Ukraine. The agreement bolsters international credits to Erdogan, which resumes Russian and Ukrainian agricultural products exports, easing the risk to world food security.

The Turkish leader’s trip follows a three-way meeting with the Russian leader and Iranian President Ebrahim Raisi in Tehran last month. Moreover, according to Ankara, world and regional developments will be on the meeting agenda of both leaders and bilateral ties. The Duvar news portal analyst Ilhan Uzgel said that the Turkish president’s success in brokering the United Nations deal and the Sochi meeting sends a positive message to Erdogan’s western allies about the Turkish leader.

Turkey and Russia have an intertwined relationship from North Africa to the Middle East, to the Caucasus, based on a blend of rivalries and cooperation. As their energy partnership deepens, they also have a burgeoning relationship. During the Sochi meeting, Erdogan hopes to resolve an impasse with Putin over Syria, according to analyst Uzgel. Ankara accuses Syrian Kurdish forces of being linked to an insurgency within the country and is considering launching a major offensive against them.

Two weeks ago, they met in Tehran. Erdogan appears to have been unable to get what he wanted from Putin. He directly stated Tel Rifat and Manbij as the two locations he would like to invade in northern Syria. It’s most likely he’s considering the possibility of a military campaign in Northern Syria.

Considering Russian control of Syrian airspace, Ankara requires Moscow’s cooperation if it is to conduct its military operations. Putin is concerned about Turkey’s growing military presence in Syria, but the two leaders have experience managing differences, according to analyst Gasimov. It is definitely true that there are some inconveniences on both sides, but we also see a considerable willingness on both sides to discuss it,” he said.