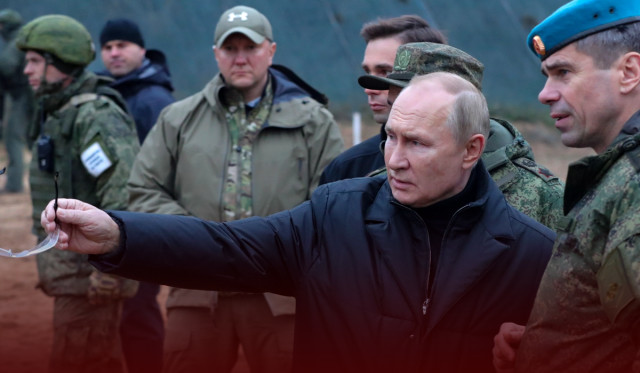 Russian President Vladimir Putin has publicly announced that civilians from Kherson in southern Ukraine have been approved for withdrawal. Kyiv’s forces have steadily advanced on this strategic port city in the past few days. In his presentation, Putin suggested that people living in dangerous areas leave so that the civilian population would not be adversely affected. Kherson, the only major city that Moscow has gained since its military invasion in February, is reportedly occupied by at least 70,000 people.

In the latest sign of Russia’s retreat from one of Ukraine’s most bitterly contested regions, Russian president Vladimir Putin publicly supported the evacuation of civilians from part of the south Kherson region.#Ukraine #KhersonCounteroffensive #KhersonRegion #PutinWarCrimes pic.twitter.com/CZ9hRVaogt

During the Unity Day holiday on Moscow’s Red Square, President Putin called for removing civilians at risk of shelling and attacks. Ukrainian authorities allege that Russia has deported Ukrainian civilians forcibly, a crime classified as a war crime. Moscow, however, denies this accusation. In addition, Kyiv has been forced to impose frequent power blackouts due to Russia’s intensive missile and drone strikes across Ukraine’s civilian infrastructure. On Thursday, reports emerged that Russian soldiers were also leaving Kherson – in what would be a significant departure.

In an interview with Russian media, Kremlin-appointed official Kirill Stremousov declared that Moscow would likely withdraw its troops from the region. However, officials from Ukraine remain cautious about the report, warning that it could be a trap designed to entice their soldiers into dangerous environments. On 24 February, Russian forces attacked Kherson, but Ukrainian troops slowly reclaimed territory along its outskirts. As a result, Kherson was first forced to switch into defensive mode by the Russian army in the middle of last month.

Later, military commanders stated that the evacuation of the city’s residents had been completed prior to the anticipated battle. Despite not controlling all these regions completely, Russia claims the Kherson region as its own territory, along with three other Ukrainian parts. The claim was rapidly justified through local “referendums,” a move condemned worldwide. Russia annexed the peninsula in conjunction with its annexation of Crimea in 2014.

During his Friday speech on Red Square, President Putin also announced that 318,000 soldiers had taken part in a mobilization that has now been completed, exceeding his target number of 300,000. The BBC has not independently verified this figure, but Putin has claimed that 49,000 are already engaged in active fighting. In the meantime, the Wagner Group has opened its headquarters in St. Petersburg, the first official office for the private military company.

The Russian law governing the call-up of reservists has now been amended by Putin so that men who have recently been released from prison for serious crimes are eligible to be called up. However, this change will likely lead to the conscription of recent prisoners of war and convicted murderers. In addition, military service is still excluded for those convicted of sexual crimes against children or terrorist acts.

Volodymyr Zelensky, the president of the Ukrainian Republic, recently commented on the conflict and attacked the owner of today’s Russia for his insane stubbornness. His adversaries do not wish to negotiate peace; instead, they send “human meat grinders” – mobilized troops and mercenary forces. The eastern towns of Bakhmut and Soledar have been the sites of the week’s most fierce fighting, according to Zelensky.

Images have circulated on the internet showing Russia’s flag no longer flying at the top of the main administration building in Kherson city. Despite these signs, Kyiv has stated that they could represent a Russian deception intended to lure Ukrainian troops into a trap. Kherson was under a 24-hour curfew on Friday, according to Stremousov, who explained that the curfew was necessary to protect Kherson from an attack by the Ukrainian army.

Ukraine’s 2nd Infantry Company of mechanized infantry dug in near a treeline west of Kherson, confident the Russians would ultimately retreat but fight on the way back. It is Vitalyi, 48, the deputy commander of the company, who believes Russian efforts to strengthen their defenses appear to be designed more to protect a withdrawal than to hold Kherson. “They have a large number of tanks and personnel, but I do not anticipate them remaining for more than a week,” he said, as his men fought to improve bunkers and clean weapons despite intermittent artillery strikes.

Even though the Russians are expected to fight, Vladyslav, a 27-year-old soldier, is confident they will go to war: “We will go to fight as well. We have no other choice.” It is our home. We own this land. Russia has captured the region’s capital intact since its invasion in February, located on the Dnipro River’s west bank. If lost to Russian forces, it would represent one of the most devastating blows to the entire conflict.

Biden announced that the United States would donate $400 million to the Ukrainian military in the form of missiles for the HAWK air defense system to combat Russian drones, as well as T-72 tanks being refurbished from the Czech Republic and cruise missiles. This assistance has resulted in U.S. military aid to Ukraine amounting to more than $18.2 billion since the invasion. President Volodymyr Zelensky and Andriy Yermak, the chief of staff to President Zelensky, met with Jake Sullivan, the national security advisor for President Joe Biden.

According to Sullivan, both Biden’s Democratic Party and the opposition Republican Party will continue to provide aid, including economic, humanitarian, and military assistance. “The Ukrainian presidential administration fully intends to ensure that all resources will be available as necessary, and we will receive votes from both sides of the aisle to accomplish that goal,” he told reporters.

As Sullivan stated in his remarks, it is unlikely that Republicans will lose control of the U.S. House of Representatives in the upcoming midterm elections. However, it has been expressed that several individuals have expressed concern that close allies of former President Donald Trump, known for his “America First” agenda, might cut or even block Ukraine aid, which is subject to congressional approval.