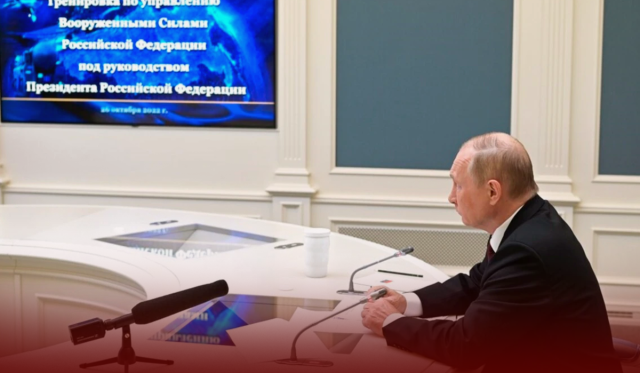 Kremlin officials said Russian President Vladimir Putin observed on Wednesday exercises intended to simulate a response to a large-scale nuclear attack from a distance. On a large television screen, the Russian state broadcast showed a video of Putin observing the drills, and military leaders commented on them. Russia’s Defense Minister Sergei Shoigu stated in the broadcast that the exercises involved launching multiple ballistic missiles and cruise missiles practiced by a nuclear submarine, long-range aircraft, and long-range aircraft.

On Wednesday, Russian President Putin remotely observed exercises by his nation’s strategic nuclear forces intended to simulate an attack by a powerful nuclear weapon. In a huge television display, state television showed a video of the president observing the drills.#Putin pic.twitter.com/IOvgWilALF

Earlier this week, the White House confirmed that Russia had announced its plans for its annual nuclear exercises, dubbed “Grom” or “Thunder.” NATO’s exercise, dubbed “Steadfast Noon,” began on Monday. Russia has claimed for several days that Ukraine intends to develop and deploy a “dirty bomb” during its conflict with the country. The purpose of dirty bombs is to spread radioactivity capable of causing massive deaths and contamination. It is common for dirty bombs to contain both conventional explosives and radioactive materials.

On Tuesday, the U.N. Security Council held an emergency summit to discuss the allegations made by Russia. It is believed that the allegations are being made as a pretext for some escalation of the Ukrainian conflict. Ukraine and its Western allies have vehemently denied these accusations. In a statement from NATO’s headquarters in Brussels on Wednesday, Secretary-General Jens Stoltenberg characterized the allegations as “absurd” and “blatantly false,” He warned Russia not to escalate the conflict under pretenses.

On Wednesday, a meeting was held between President Biden and Israeli President Isaac Herzog at the White House. In an interview with The Washington Post, Herzog indicated he planned to discuss Russian forces’ use of Iranian drones in Ukraine with the U.S. president. It has been reported that Herzog’s office has images of drones shot down in Ukraine like those that Iran tested in 2021. According to Ukraine and its Western partners, Russia has used Iranian-made Shahed-136 drones to attack Ukrainian cities, including Kyiv.

Earlier this week, U.S. President Joe Biden made a similar statement. A reporter asked him if he thought Russia was deploying a dirty bomb of its own using the dirty bomb allegations. He stated, “Russia would make a grave mistake if it used tactical nuclear weapons.” The Iranian government has denied providing these weapons to Russia, and the Russian government has denied using them in Ukraine. Ukraine has requested that the United Nations send experts to examine the debris.

Furthermore, the United States, France, the United Kingdom, and Germany have also written to the United Nations, expressing their support for an investigation. By UNSC Resolution 2231, which restricts transfers of certain items to and from Iran, Russia called another U.N. Security Council meeting on Wednesday to discuss the possibility of sending U.N. experts to Ukraine.

“The secretariat needs to respond to requests of member states, but to act based on a clear, explicit mandate and the UN Charter, not based on the desires of certain countries,” Ambassador Vassily Nebenzia said of Ukraine and the Western states’ letters.

“The secretariat must respond to requests from member states, but this must be done by a clear and explicit mandate of the United Nations Charter, not based on the desires of certain countries,” Ambassador Vassily Nebenzia stated concerning the letters from Ukraine and Western nations. The Iranian ambassador noted that his country had kept a neutral position on the conflict and had consistently advocated for peace.

“Amir Saeid Iravani told members of the council that Iran has never provided weapons to any of the parties in the Ukraine conflict, before or after the conflict. During the meeting, the U.N.’s top lawyer informed the council that the secretary-general must provide a report on the implementation of Resolution 2231 twice a year, including findings and recommendations. “It is the understanding of the Secretary-General that unless the Security Council provides further direction, these reports will continue to be prepared in the manner in which they have been prepared to date,” said U.N. legal counsel Miguel de Serpa Soares.