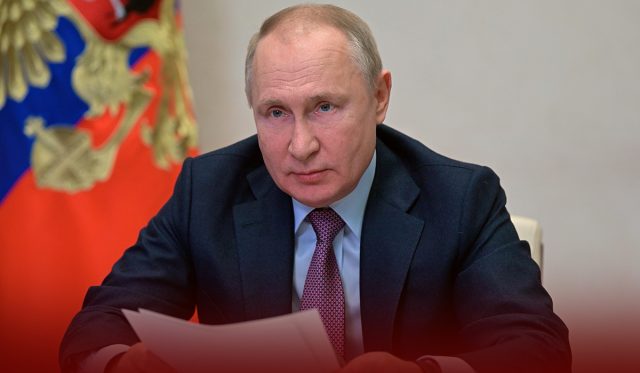 Vladimir Putin, the President of Russia, said he would consider several options if the West fails to meet the security demands of Moscow amid mounted conflicts involving a huge deployment of the Russian army near Ukraine. Earlier this month, Moscow submitted security documents in draft form to demand an end to NATO forces’ eastward expansion and military cooperation with nations like Georgia and Ukraine, including other things.

Last week, talking at his annual press conference, the Russian president urged Western economies to immediately fulfill the Russian security demands, listing off a series of grievances about NATO and Ukraine. Additionally, he warned that Russia would have sufficient measures if the Western countries continued their aggression on the threshold of Russia. in the start o this month, the U.S. Intelligence determined that Russia is planning to invade Ukraine.

Putin says Russia doesn’t want Ukraine war but needs ‘immediate’ guarantees:Russia wants to avoid conflict with Ukraine and the West, Vladimir Putin said on Thursday,but needs an”immediate” response from the United States and its allies to its demands for security guarantees. pic.twitter.com/jZ2V5VEgcQ

What will be the Response of Russia?

TV host asked Putin to specify the Response of Russia; he added that it could be diverse and depends on what proposals Russian military experts submit to him. However, he didn’t elaborate further on his response. United States officials said that they were ready to hold negotiation dialogs on the security demands of Russia. However, the officials privately said that some of the Putin demands are either impossible, impracticable or fundamentally contrary to Western interests and values.

Meanwhile, the United States and its allies agreed to launch security dialogs with Russia in January to discuss its concerns. On 25th December, a NATO official cited as saying Secretary-General Jens Stoltenberg decided to organize a meeting of the Russia-NATO Council on 12th January and that the U.S. alliance was in contact with Moscow on the issue. However, incumbent Sergey Lavrov, the Foreign Minister of Russia, said that the proposal was still under discussion, with the timing and format requiring explanation.

It would be the council’s first meeting in around two and half years. Kyiv and its Western supporters blamed Russia that it massed about one hundred thousand troops near the borders of Ukraine with a likely intention to invade. The European Union, the United States threatened Russia with strict consequences in the move of a military escalation. On the other hand, Moscow denied that it had intentions to trigger an invasion.

In March 2014, Russia illegally invaded the Crimean Peninsula of Ukraine. Shortly after, it backed separatists fighting the Ukraine governmental forces in the east of the country in a dispute that claimed over thirteen thousand and two hundred lives since April 2014. On 25th December, the Defense Ministry of Russia announced that over ten thousand troops finished monthlong drills nearby Ukraine and that troops involved were coming back to their permanent bases.

The defense ministry stated that the military exercises of Southern Military District forces had taken place in a host of southern regions of Russia like Krasnodar and Rostov, and further abroad, including in the North Caucasus Astrakhan and Astrakhan. In addition, Russia also held warfare military training sessions in Armenia, occupied Crimea, and the independent Georgian regions of South Ossetia and Abkhazia.

Read Also: Biden says the US will not Deploy Troops in Ukraine