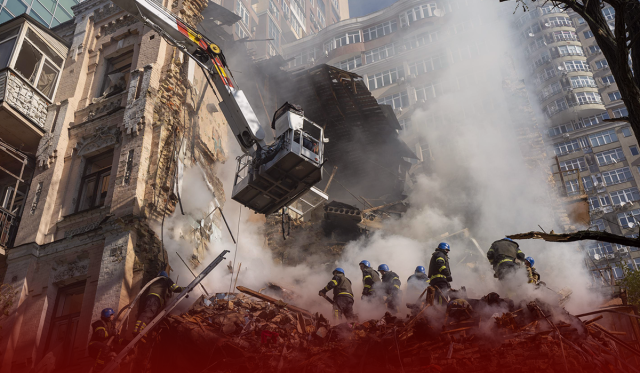 A wave of explosive-laden Russian drones launched from Kyiv on Monday killed four people, prompting Ukrainian President Volodymyr Zelenskyy to urge his allies to supply Ukraine with air defense weapons and more aid. “Ukraine needs significantly more air defense systems and latest missiles for those systems to guarantee the protection of our skies and eliminate the possibility of Russian terrorists,” he said in his nightly video address. “It is our responsibility to end this terror,” he added.

After a series of attacks on Ukrainian cities, in which at least four people, including a couple expecting a child, were killed, the US said it would hold Russia accountable for “war crimes” and act against companies and nations working with Iran’s drone program.#UkraineWar pic.twitter.com/wCJOVNlgBR

Drones that struck Kyiv on Monday set fire to several buildings, while another ripped a hole through another building. Over 12 hours, Zelenskyy reported that the Ukrainian military had shot down 37 drones and a few cruise missiles. It follows months of relative calm in Kyiv that was broken by Russian missile strikes a week ago. In a statement to reporters on Monday, White House press secretary Karine Jean-Pierre said that the attacks were “another example of Russian President Vladimir Putin’s brutality.” The US government will hold Russia accountable for “its war crimes.”

Earlier this week, UN Secretary-General Antonio Guterres expressed “deep concern” over the continued drone and missile attacks against Ukrainian towns and cities, according to United Nations person Stephane Dujarric. “There should be an immediate halt to the attacks and a rapid de-escalation in violence.” Guterres demanded.” Officials from Ukraine said that the drones were Shahed models made in Iran. Their use by Russia is often associated with so-called kamikaze attacks, in which the aircraft is deliberately crashed into a target.

In the past, Zelenskyy has alleged, relying on Ukrainian intelligence services, that Russia has ordered 2,400 Shahed drones from Iran and rebranded them as Geran-2 drones – a Russian word meaning “geranium.” The Iranian government has denied supplying Russia with drones. However, in response to a question submitted by the US State Department on Monday, Vedant Patel claimed that Iran’s supply of drones to Russia violated a resolution by the UN Security Council endorsing the 2015 nuclear pact between Iran and six major world nations.

A senior US defense official has reported that Russian forces are hitting civilian targets indiscriminately “to seed terror among the Ukrainian population.” “The targets that the Russians are choosing speak for themselves,” he explained, adding that there is no military value in them since they are non-military targets, civilians with no value to the Russians. It has been promised that Western nations will bolster Ukrainian air defenses with systems capable of shooting down drones, but many of these weapons have not yet been delivered.

Read Also: G7 Countries Will Support Ukraine for as long as it takes