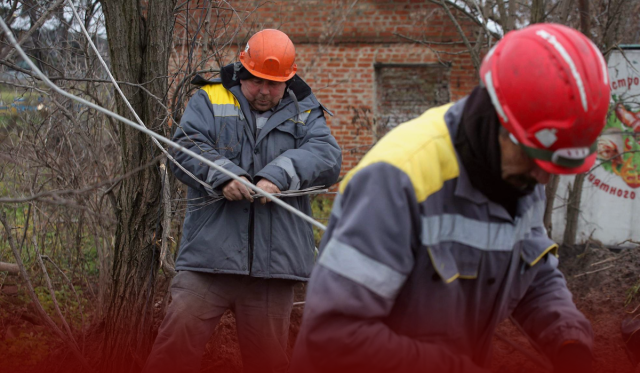 The Ukrainian authorities have been working to restore power throughout the country, making some progress in repairing the electrical grid following Russian missile attacks, but they cannot immediately help millions of Ukrainians with no power. After his nightly address on Friday, Volodymyr Zelensky stated that the number of people without electricity had been halved since Wednesday. However, he noted that there were still 6 million Ukrainians without electricity.

The Ukrainian authorities have begun restoring power across the country in response to Russian missile attacks on the country, making some progress in repairing the electrical grid. However, they cannot immediately assist the millions of Ukrainians without power.#Ukraine #Russia pic.twitter.com/NaNXn7WkLu

Ukrenergo, the operator of Ukraine’s national electricity grid, stated on Telegram on Friday, “Repair crews are working around the clock.” However, approximately 30% of the country’s electricity supply remains disconnected, and people are encouraged to conserve energy. Moreover, Zelenskyy urged citizens to cut the amount of energy they consume. “You cannot run several powerful electrical appliances simultaneously simply because there is electricity,” he explained.

On Wednesday, Russian forces launched yet another devastating missile attack against Ukraine, resulting in the most significant outages Kyiv has suffered since the invasion began nine months ago. Despite their clear aim to harm civilians, Ukraine characterized the attacks as war crimes. Additionally, a Russian official has stated that only military-related infrastructure is being targeted and that Kyiv is to blame for the blackouts.

For many parts of Ukraine, the weather forecast for the coming days predicts rain and snow, along with temperatures in the single digits. It has been confirmed by NATO’s head of mission that the Russian missile attack on civilian infrastructure has left the country’s people without lights, heat, and food, resulting in a horrific start to the winter season for the country. The Norwegian Prime Minister, Jens Stoltenberg, stated during a speech in Brussels that Russian President Vladimir Putin was “failing as president in Ukraine, and he is retaliating with even greater brutality.”

NATO will remain committed to Ukraine if it is necessary, Stoltenberg stated. In his remarks, he noted that alliance members have been providing Ukraine with the kind of military support that is unprecedented. In addition to fuel, winter equipment, generators, medical supplies, and drone jamming devices, NATO nations have also provided these goods, but he noted that more might be needed as winter approaches, particularly since Russia has continued to target the energy infrastructure of Ukraine. Further developments took place on Friday, with missiles striking the recently liberated city of Kherson for a second consecutive day.

A total of 11 people were killed in a series of strikes that began on Thursday and continued into Friday. Russia has withdrawn its forces from the city in the past two weeks. The Russian troops, however, remain on the bank of the Dnieper River, from where they can fire missiles at Kherson. There was a commitment from European leaders to provide additional support to Ukraine on the diplomatic front.

James Cleverly, the British Foreign Secretary, announced a new assistance package during his Friday visit to Kyiv. In addition to radar and other technologies aimed at countering Russian aircraft and drones supplied by Iran and used against Ukrainian targets, particularly the power grid, the package is reportedly worth about $60 million, according to the United Kingdom. Aside from this assistance, they announced the delivery of more than 1,000 surface-to-air missiles earlier in November.

In a tweet about military aid, Cleverly said, “Words will not keep the lights on this winter. Words will not defend against Russian missiles.” As winter approaches, Russia continues brutal attacks on energy infrastructure, civilians, and hospitals. As a result, France will send several hundred high-powered generators to Ukraine to assist those struggling during the cold season, French Foreign Minister Catherine Colonna announced on Friday. During her remarks, she stated that Russia is “weaponizing” winter and placing Ukraine’s civilian population under great hardship.

Aside from European assistance, the United Nations humanitarian office also announced that hundreds of generators had been sent to Ukraine to assist Kyiv in maintaining essential services, such as health care. In addition, the World Health Organization sends several generators to Ukraine’s hospitals. A UN Human Rights Commissioner, Volker Türk, said Friday that he was shocked at the extent of civilian suffering caused by the bombing amid broader allegations that human rights were being violated. “Many people are suffering from extreme hardships and awful living conditions as a result of these attacks,” Türk stated in a statement issued on Friday.

On Friday, NATO Secretary-General Jens Stoltenberg pledged to help Ukraine maintain its independence against Russian aggression for “as long as it takes” and to help the war-ravaged country develop a modern army that meets Western standards. In an interview with reporters ahead of a meeting of NATO’s foreign ministers in Romania next week, Stoltenberg stated that it is encouraging to see all countries that wish to continue providing air defense systems & other latest weapons to the war-wracked country. NATO does not provide weapons to its members in its capacity as an organization.

NATO will remain steadfast in its support for Ukraine until the situation improves. The former Norwegian prime minister stated that they will not back down.” The allied countries have provided unprecedented military aid, and he hoped that the foreign ministers would also agree to increase their non-lethal assistance. In addition to fuel, generators, medical supplies, winter equipment, and drone jamming devices, Stoltenberg said members of the 30-nation NATO had delivered generators, fuel, and equipment to the region.

Dmytro Kuleba, Ukraine’s foreign minister, would participate in the meeting to discuss the most pressing issues facing his country and what kind of long-term support NATO can offer. An official from NATO’s top civilian wing stated that the support would help Ukraine become a member of the alliance soon. To resolve the issue, NATO is holding a meeting in Bucharest between November 29 and 30, almost fifteen years after it vowed to Ukraine and Georgia that they would one day become NATO members – a commitment that deeply angered the Putin government.

Read Also: US to Send Ukraine $400m in Ammunition & Generators