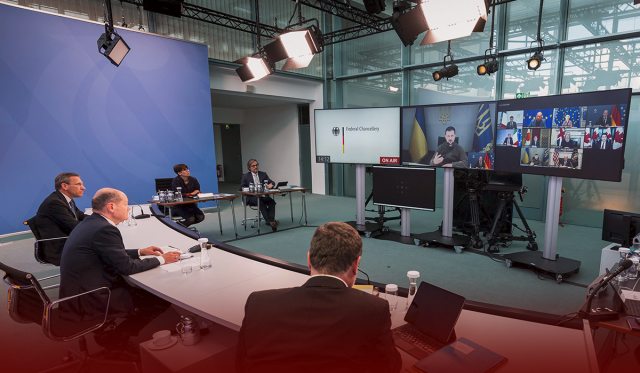 In addition to reaffirming their support and solidarity with Ukraine, the leaders of the Group of Seven pledged to meet the country’s urgent needs for military and defense equipment to counteract the aggression of Russia. Furthermore, the White House said in the statement that g-7 leaders condemned the Russian government’s continuous inhumane and brutal attacks against critical infrastructure, particularly water and energy facilities and cities in Ukraine. Among the recommendations in the statement is a description of these “indiscriminate attacks” as “war crimes” and a condemnation of those who are “facilitating Putin’s illegal campaign.”

The Ukrainian government started postwar reconstruction one day before the G-7 summit in Paris. During the online meeting, Ukrainian President Volodymyr Zelensky was present. Former German Chancellor Olaf Scholz, currently the president of the G-7 nations, committed to rebuilding Ukraine’s financial stability and compared it to the Marshall Plan that the United States enacted after World War II to assist Europe in rebuilding. At the same time, Russian forces launched missiles, drones, and artillery strikes against eastern and southern Ukraine on Monday.

Ukrainian Prime Minister Denys Shmyhal requested Patriot missile batteries and high-tech air defense systems to counter Russian aggression. Governor Pavlo Kyrylenko reported that on Monday, eight civilians were injured in a rocket attack by the Russian government on Hirnyk in the eastern Donetsk Oblast. After urging residents to flee Donetsk Oblast, Kyrylenko added that Moscow is “continually terrorizing peaceful Ukrainians.” Fighting in the area has led to thousands of people being left without power in subzero temperatures due to damaged power infrastructure.

Over the weekend, Russian strikes knocked out Odesa’s power grid, leaving 1.5 million people in the dark and the southern port closed. Shmyhal requested urgent assistance from the Organization for Economic Cooperation and Development (OECD) of $1 billion to restore the country’s infrastructure that had suffered catastrophic damage. “The main priority now is survival – restoring critical infrastructure, ensuring adequate energy supply, and preparing for the winter,” Shmyhal stated in a meeting reported by the media and in his own Telegram channel.

In his nightly address on Monday, the Ukrainian president stated that Russia would continue to target the country’s electrical grid. “The Russian government still hopes for blackouts. Terrorists depend on blackouts for their survival,” he stated. “The Ukrainian military command, our Air Force, and air alarms must be taken seriously as long as they have missiles – and Russia still has them. Therefore, we must be prepared at all levels for any hostile intentions. “We will do everything we can to survive this winter,” he said.

Russian forces have been attacking Ukraine’s power grid since October. Zelensky has described these attacks as war crimes targeting civilian life, while Moscow maintains that they are legitimate military operations. A senior Pentagon official has stated that Russia will exhaust its fully serviceable ammunition stock by early 2023. Speaking anonymously, a Russian official said, “They have drawn from Russia’s aging ammunition stockpiles, indicating that they agree to use older ammunition. Some of this ammunition dates back more than 40 years.”

In response to the unlivable living conditions in Ukraine, many Ukrainian refugees are likely to arrive in Europe over the winter, according to Jan Egeland, secretary-general of the Norwegian Refugee Council. However, Egeland told Reuters that thousands more would be affected by the horrifying and unlawful bombing of civilian infrastructure that has rendered life in many areas inhospitable. During the daily update on the military situation, the Ukrainian General Staff indicated that Ukrainian forces had repelled Russian attacks against four settlements in the eastern Donetsk region and eight settlements in the neighboring Luhansk region.

Both regions are part of a set of four in southern and eastern Ukraine that Russia claims to have annexed due to “referendums” that Kyiv has branded illegal. The Ukrainian military has announced that Russian forces are suffering heavy losses on the eastern front due to brutal fighting, which is also causing losses among Ukrainian troops. “It is not unusual for several heavily wounded to be treated at the same time: usually four or five amputations are performed at once,” Oleksii, an army doctor who requested anonymity, told Reuters in eastern Ukraine.

On Monday, two people were killed and five injured by Russian shelling in the recently liberated Kherson region, according to the governor of the region, Yaroslav Yanushhevych. On Monday, European Union foreign ministers decided on fresh sanctions against Russia and more money for Ukraine’s military. Meanwhile, the United States insisted on continuing support for Ukraine in the wake of Russian airstrikes on critical infrastructure. Approximately $2.1 billion would be provided for weapons deliveries to Ukraine under an EU package being discussed in Brussels.

In Ukraine, UN aid chief Martin Griffiths will begin a four-day visit on Monday. In addition to visiting Mykolaiv to see housing for refugees, Griffiths will visit Kherson to see how the UN and local officials are helping to provide warming centers for residents who have lost power, heat, and water in their homes. UN officials report that Griffiths will witness the effects of the humanitarian response and the dangers posed by freezing winter temperatures as infrastructure damage increases.