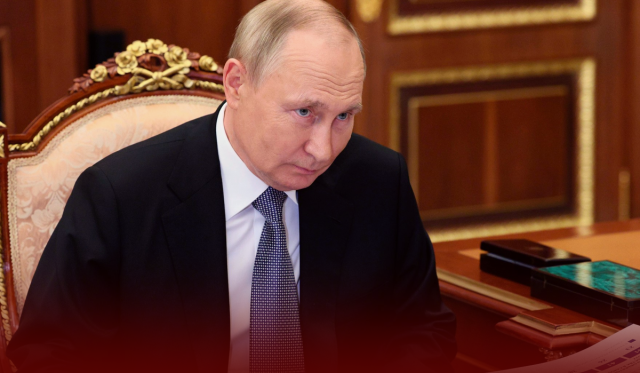 Russian President Vladimir Putin has announced martial law in the four Ukrainian regions he proclaimed as being annexed last month: Donetsk, Luhansk, Kherson, and Zaporizhia. He did not immediately disclose the steps taken under martial law but emphasized that they were intended to increase economic, industrial, and production stability in support of Russia’s special military operation in Ukraine.

Russian President Vladimir Putin has imposed martial law in four regions of Ukraine, which is part of a region under the control of Russian forces. However, Ukrainian forces continue to liberate parts of the country’s east under Russian occupation.#PresidentPutin #MartialLaw pic.twitter.com/bagXonXga1

“On Wednesday, the Russian president made televised remarks to members of his Security Council, addressing very complex, large-scale tasks. The goal is to ensure that Russia has a secure and stable future for the future of Russians,” he said.

On the other hand, Ukrainian presidential adviser, Mykhailo Podolyak, has rejected the move and declared that Kyiv would continue its counteroffensive against Russian forces in the country. “Military law’ implementation on the occupied territories by Russia should be regarded as nothing more than a pseudo-legalization of looting of Ukrainian property,” he wrote on Twitter. Despite this, Ukraine remains committed to liberating its territories and unoccupied them.

“Martial law” implementation on the occupied territories by RF should be considered only as a pseudo-legalization of looting of Ukrainians’ property by another “regrouping”. This does not change anything for Ukraine: we continue the liberation and deoccupation of our territories.

In a report from Moscow, Al Jazeera‘s Mohammed Vall stated that the declaration would have far-reaching implications for the residents of Russian-occupied territory. Consequently, more restrictions will be placed on the movement of people. Essentially, this will give the military and local authorities the power to restrict the movement of individuals or their gatherings,” he added.

Civilians and semi-civilians will be asked to reorient their production lines so they can assist the military, and gatherings of political parties and activities will be banned. “These regions will now see a complete mobilization rather than partial mobilization, as was the case in the Russian Federation,” he explained.

Putin authorized all regional heads to exercise additional emergency powers. In addition, Russia’s government has been instructed to establish a Coordination Committee under Prime Minister Mikhail Mishustin to enhance Moscow’s military campaign in Ukraine by working with its regions. The Russian state agency TASS reported that the decree would be sent to the Federation Council, the upper house of Congress, for approval. It would also be sent to the lower house of Congress, the State Duma.

Ahead of Thursday’s scheduled implementation of the order, President Putin did not provide details regarding the additional powers to be granted to the heads of Russian regions. However, the draft legislation suggests that it may involve restrictions on the right to travel and to gather in public, stricter censorship, and wider authority for law enforcement agencies. Four partially occupied regions in the Russian Federation were annexed on September 30, three days after Kremlin-organized “referendums,” which were widely regarded as invalid by the international community.

Even though the formal announcement has been made, Russia is losing ground to Kyiv’s counteroffensive every day. Moscow has plans to evacuate civilians from Kherson, one of the four occupied regions. Sergei Surovikin, one of the generals of the Russian air force appointed to lead the invasion on October 10, confessed to them that the situation was one of the most difficult he had ever encountered. On Wednesday, he told reporters that the enemy continued attempting to attack Russian military positions, despite repeated warnings.

Meanwhile, the U.N. Security Council held a private meeting on Wednesday to discuss Russia’s use of Iranian-made drones in its war against Ukraine at the request of America, Britain, and France. Washington, London, and Paris contend that Tehran’s supply of these UAVs to Russia violates U.N. Security Council Resolution 2231, which permits transfers of restricted items to or from Iran only when approved by the Security Council on a case-by-case basis. The approval of such a proposal has not been sought.

During the meeting, France’s ambassador Nicolas de Riviere told reporters that it was abundantly clear that Iran had provided the drones to Russia and that they had been used in Ukraine. “This constitutes a violation of Resolution 2231.”

Today I raised in the Security Council the UK’s serious concerns over Iranian drones being used to target civilians in Ukraine by Russia.

The Iranians have denied this but it doesn’t stand up to scrutiny.

Council members have asked the UN to investigate. 1/2

“The U.S. Mission to the U.N. anticipates this will be just the beginning of several discussions concerning how to hold Iran and Russia accountable for their failure to comply with the U.N. Security Council’s requirements,” said Nate Evans, spokesperson for the United States Mission.

“By the evidence presented at today’s meeting, Russia is committing cruel and deliberate attacks against civilians and critical civilian infrastructure in Ukraine using Iranian-made drones,” he explained, “in violation of U.N. Security Council resolutions.” During the past week, Ukrainian officials have claimed that Iranian-made Shahed-136 attack drones were used in waves of attacks, including on Kyiv’s capital. These drones were loaded with explosives and crashed into their targets.

The Iranian ambassador to the United Nations stated to reporters that his government categorically rejects the “unfounded and unsubstantiated claims” resulting from a disinformation campaign directed against its government. “The fact that these states are spreading misinformation against Iran and mixing up Security Council Resolution 2231 to link baseless allegations against Iran with the resolution is disappointing,” said Ambassador Amir Saeid Iravani.

The Russian deputy UN envoy has informed reporters that the allegations are “baseless,” that no arms transfers have been made in violation of the resolution, and that no Iranian drones have been supplied to Russia for use in Ukraine. However, a Ukrainian foreign ministry report in the past week stated that over a hundred Iranian-made drones had struck power plants, residential buildings, bridges, sewage treatment plants, and other urban targets.

Read Also: The US to Send Another $725 Military Aid for Ukraine