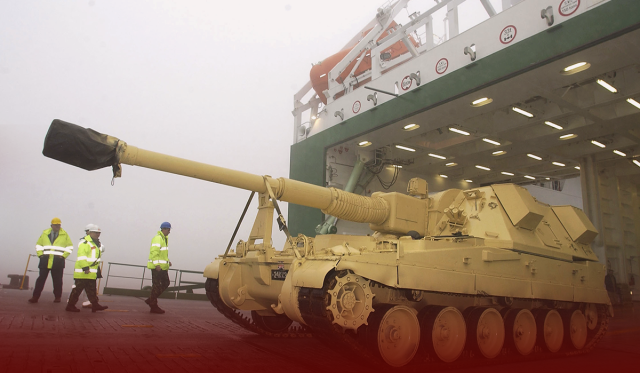 During a meeting of Nordic, Dutch, and Baltic counterparts in Riga, United Kingdom Prime Minister Rishi Sunak will announce a substantial new artillery package for Ukraine. Sunak is scheduled to arrive in Latvia on Monday to participate in a meeting with fellow members of the Joint Expeditionary Force to discuss current efforts to counter Russian aggression in the Baltic and Nordic regions. According to a statement issued by the PM’s office, Prime Minister Sunak will urge the leaders to support Ukraine at a level equal to or greater than 2022.

The British Prime Minister, Rishi Sunak, is scheduled to announce a new $304 million military aid package to Ukraine on Wednesday to boost its counteroffensive against Russia in the event of a conflict.#UKAid #Ukraine #Russia #MilitaryAid #UkraineRussiaWar #RussiaUkraineConflict pic.twitter.com/YQAqtYz6Tq

A $250 million ($304 million) contract between the U.K. and Ukraine will likely be announced as part of the same announcement. By signing the agreement, Ukraine will be able to obtain critical artillery ammunition throughout the rest of 2023. Recent British efforts to provide defensive assistance to Ukraine include sending 125 anti-aircraft guns and Multiple Launch Rocket Systems. “Since February, the U.K. has supplied more than 100,000 rounds of ammunition, which is directly related to our successful operations to retake the territory from the Ukrainian regime,” the statement adds.

During his visit to Kyiv last month, Sunak offered further support to the Ukrainian government in its efforts to fight Russian forces following the invasion of February. Throughout the invasion of Ukraine, the United Kingdom and its European allies have worked together in lockstep, and we remain steadfast in our efforts to restore peace in Europe,” Sunak said. Nevertheless, achieving peace requires that we deter aggression, and joint deployments across the region are crucial in ensuring that we can respond to the gravest of threats.

Among the leaders attending the JEF meeting are Sweden, Denmark, Estonia, Latvia, Lithuania, the Netherlands, Finland, Iceland, Norway, and the U.K. Volodymyr Zelensky will also speak. The Kiel Institute for the World Economy (KIWE), a German group tracking support for Kyiv, estimates that the U.K. has committed approximately $7.43 billion in assistance since Russia invaded Ukraine on February 24. In addition, the Kiel Institute estimates that the British government has pledged about $51 billion in humanitarian, financial, and military aid to Ukraine, making it the second-largest donor nation.

Ukraine Slams Henry Kissinger for a Negotiated Peace with Russia

Ukrainian officials have dismissed calls by Henry Kissinger for a negotiated peace with Russia, arguing that a world war could be avoided by not appeasing Russian aggression. Henry Kissinger, former U.S. Secretary of State and architect of Cold War diplomacy with the Soviet Union under John Nixon and Gerald Ford, explain his proposal in a recent article in Spectator magazine. “For some time now, I have made it clear that I am in favor of joint allied efforts to oppose Russia’s aggression in Ukraine,” Kissinger wrote in his letter.

Kyiv dismissed former U.S. Secretary of State Henry Kissinger’s suggestion that the time is approaching to achieve peace through negotiation with Russia, saying his proposal “appeases the aggressor.”

“However, it seems that the time is ripe for building on the strategic changes already achieved and integrating them into a new framework for achieving peace through negotiation,” he concluded. Some people would like to see Russia rendered ineffective by the war. In response, Kissinger stated that he disagreed with him. Over half a millennium, despite its propensity to violence, Russia has contributed substantially to global equilibrium and power balance. The historical significance of its role should not be diminished.

The military setbacks suffered by Russia have not eliminated its nuclear capability, which enables it to threaten an escalation in the situation in Ukraine,” he wrote. Kissinger, who has had numerous meetings with the Russian President, proposed in Davos during the World Economic Forum in May that Ukraine should allow Russia to continue to control Crimea, which it annexed in 2014. The former Secretary of State also recommended that Moscow withdraw to the front lines before its invasion in February 2022.

Volodymyr Zelenskyy, the President of Ukraine, announced that almost six million people were restored to power in the last 24 hours after Russian missiles damaged critical energy infrastructure throughout the country on Friday. In his nightly video address on Saturday, he stated that repair work would continue without a break following yesterday’s terrorist attack. The stabilization of the system remains a challenging task.” There is a problem with the heat supply.

“Water supplies are experiencing major problems,” Zelenskyy stated, noting that Kyiv and Vinnytsia to the west and Lviv are the most affected. Russian officials reported that more than 70 missiles were fired on Friday in one of the heaviest strikes since the Kremlin’s invasion on February 24. Emergency blackouts were imposed throughout the country as a result. Almost weekly since early October, Russia has been attacking the country’s energy infrastructure with missiles, but Friday’s attack was more damaging than others, as snow and ice now cover much of the country.

Residents navigated Kyiv immobilized by fog and girded themselves for a holiday season marked by uncertainty as Ukrainian authorities worked to repair and restore vital services a day after the attacks. Vitali Klitschko, the mayor of Kyiv, reported that heating had been restored to a third of the city and electricity had been restored to a second-third. “However, emergency outage schedules are being implemented,” he wrote on the Telegram messaging service. “Due to a significant deficit of electricity.” Additionally, Klitschko stated that the metro system and the water supply had both been restored to all residents.