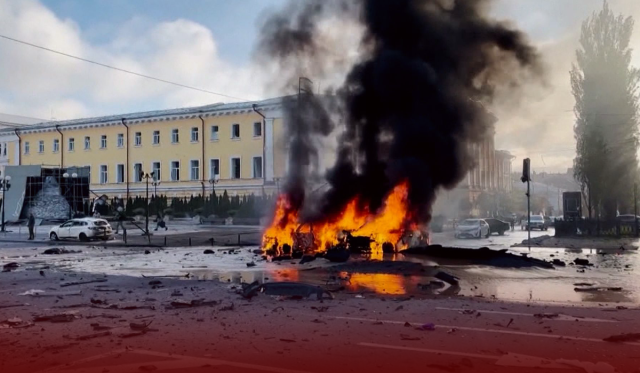 Ukrainian President Volodymyr Zelenskyy has warned of a new round of Russian missile attacks against his country, urging defense forces and citizens alike to prepare for another week with high power demands. During the daytime on Sunday, Kyiv experienced snowfall, and temperatures hovered around freezing, while the fog was expected overnight. Nevertheless, it is hoped that all power, water, and heat will be restored by the end of the week.

Zelensky has warned that Russian missiles will likely launch more attacks on his country in the coming weeks, warning the defense forces and the population to be ready to face a new week of power outages.#Zelensky #Russian #Russia #missileattack #UkrainianArmy #UkraineRussianWar pic.twitter.com/pLjnIYp0zC

However, high consumption levels have led to blackouts in some areas. Air raids carried out by the Russian military caused disruptions for millions of people in and around Kyiv. Terrorists plan to carry out new attacks. During his nightly video address, Zelenskyy stated, “we know for a fact that this is true.” Consequently, they will not be able to calm down as long as they possess missiles.”

In his remarks last week, Zelensky predicted that the coming week might be as challenging as the week prior, when attacks on electricity infrastructure caused the most severe power outages since the Russian invasion in February. The defense forces are preparing for the upcoming war. He stated that the entire country was preparing for the event. Our partners and I have worked out all possible scenarios.” Moscow did not respond to Zelensky’s claims immediately.

Russian officials have stated that they have not targeted civilians since the Ukraine invasion on February 24. Earlier this week, the Kremlin stated that Kyiv could alleviate its citizens’ suffering by meeting Russia’s demands. Russian forces annexed parts of the east and south of Ukraine in September, and President Vladimir Putin has said that Moscow’s territorial requirements are non-negotiable. In the aftermath of the annexation, Zelenskyy made it clear that he would not negotiate with Moscow and emphasized the importance of preserving Ukraine’s territorial integrity.

Kyiv and other big cities were relatively peaceful on Sunday. However, according to a statement from Ukraine’s central army command, several missile attacks were launched by Russian forces in the Dnipropetrovsk region. In addition, it has been reported from both sides that heavy rainfall and mud have had an impact, as well as broader freezing predicted along the front lines in the coming days. Moreover, the Institute for the Study of War has closely monitored developments in Ukraine.

During the last two weeks, Ukrainian forces have expelled Russian troops from the city of Kherson by digging further east and conducting “routine artillery fire” across the Dnieper River. Furthermore, the think tank noted that Russian troops had moved rocket launchers and ground-to-air missiles near the city. The situation on the front lines all over the country continues to be tense, as stated by Zelenskyy. He said that the Donetsk region remains the most challenging, as it has in previous weeks.

According to the General Staff of the Ukrainian Armed Forces, several villages in Donetsk were shelled by Russian forces, including Avdiivka and Bakhmut. In recent months, Moscow has launched a series of air raids against essential infrastructure that have resulted in widespread power outages and the death of civilians. On Wednesday, the most severe news attack in the nine-month conflict caused the greatest damage, causing millions of people to lose water, electricity, and heat as temperatures fell below 0C (32F).

Although devastating damage has been suffered to power-generating facilities, Ukraine’s power company Ukrenergo has reported that the cold weather is gradually increasing energy demand as workers rush to repair the damaged systems. The report indicated that electricity producers can still not restore full power supply because of Wednesday’s Russian missile attacks and may have to impose blackouts to conserve energy. Ukrenergo is still restricting consumption due to a capacity deficit, which currently stands at approximately 20%,” the company stated via Telegram.

On Sunday, Zelenskyy stated that utility and emergency teams worked around the clock to restore power. As a result, the situation was in “good hands” despite scheduled blackouts in most regions to assist in this process. Kherson is a city in which approximately 17 percent of the population has access to electric power, according to regional governor Yaroslav Yanushevych. During the next few days, other districts will be connected.

Some elderly people were evacuated from the southern city by volunteers and the Ukrainian government during the power outages. Volunteer Viktor Mironov stated that it is essential that as many residents as possible leave the area. Neither electricity nor water is available, nor is there any food to be found. Therefore, it is necessary to seek assistance. Help is needed for hospitals, and medicine is needed for them. The government should do everything possible to ensure that our people have access to a safe and warm place to live and all the necessities.”

Utility officials and Zelenskyy have repeatedly emphasized the importance of conserving electricity. In a report published on Saturday evening, Sergey Kovalenko, the chief operating officer of YASNO, a company that supplies energy for Kyiv, revealed that the situation in the city had improved but that it remained “quite difficult.”

Read Also: US to Send Ukraine $400m in Ammunition & Generators