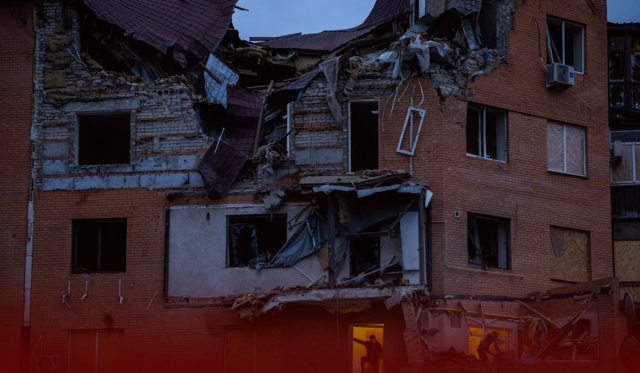 The Russian government asserts that Ukrainian forces may detonate a radioactive device, although the country has accused Russia of planning a similar attack and blamed it on the Ukrainians. Despite Ukrainian forces advancing into Russian-occupied Kherson province, Russia’s defense minister Sergei Shoigu called Western counterparts on Sunday to alert them of Moscow’s suspicion that Kyiv would use a “dirty bomb.” During his nightly address on Sunday, Ukrainian President Volodymyr Zelenskyy stated that only Russia is equipped with nuclear weapons in the region.

The foreign ministers of the U.S., the U.K., and France issued a joint statement rejecting all allegations and reaffirming their support for Ukraine. The countries stated that they all denied Russia’s transparently false allegations that Ukraine was planning to use a dirty bomb on its own soil. It would be obvious to the world that any attempt at using this allegation as a pretext to escalate the conflict would be unfounded.

In an overnight address, the Ukrainian president, Volodymyr Zelensky, stated that the Russian accusation was evidence of Moscow preparing for such an attack and would accuse Ukraine of participating. “If Russia calls and claims that Ukraine is preparing something, there can only be one explanation: Russia has already prepared everything,” Zelensky said.

With this philosophy in mind, it is not surprising that the Russian defense minister organizes a telephone carousel and engages international foreign ministers in discussions about the “dirty” nuclear weapon. The speaker said he understood who was behind everything dirty in the war.”

Following Moscow’s claim that it has annexed the western bank of the Dnipro River, Ukrainian forces have been advancing into territory controlled by Russia since the beginning of this month. Moscow would suffer one of its most significant setbacks during the war if it were to lose there. A major city, Kherson’s regional capital, is the only large city that Russia has captured intact since its invasion in February, and it is Russia’s only foothold on the Dnipro River’s western bank, which divides Ukraine in two.

In 2014, Russia seized and claimed ownership of Crimea, the peninsula it claims it annexed. The province controls the entry point to the peninsula. Men who remain behind in Kherson can join a self-defense unit, announced the Russian-installed authorities on Monday. Kyiv claims Russia is forming military formations from civilians in occupied areas, a war crime under the Geneva Conventions.

President Vladimir Putin has escalated the war since his troops suffered major battlefield defeats in September; Russian officials have repeatedly warned to use nuclear weapons to defend their territory after announcing the annexation of occupied territory. In addition, he called up hundreds of thousands of reservists. Moreover, the Russian government has initiated a new campaign to threaten Ukraine’s electric power and heating ahead of winter by using long-range cruise missiles and Iranian-made drones.

The Russian state television network runs a variety of talk shows featuring pundits who openly cheer the attack on Ukrainian civil infrastructure and call for ever more drastic measures to eliminate what they consider an illegitimate Ukrainian state. A Russian state television presenter apologized on Monday for remarks he made in which he called for the drowning of Ukrainian children in rivers and the burning alive of them in huts with nailed-down doors. Further, he joked that grandmothers in Ukraine were saving their funeral funds to pay Russian soldiers to rape them.

On Sunday, an attack by Russian missiles destroyed a suburb of Mykolaiv in southern Ukraine. Since most residents had relocated six months ago after a similar attack in the area, no one was killed despite the destruction of two apartment buildings. Mykolaiv’s Karabelnyi district, a ship-building center on the southern bank of the Buh and Dnipro rivers, was hit by explosions in the wake of a Russian air campaign targeting civilian infrastructure for weeks.

A series of tweets from the US-based Institute for the Study of War (ISW) suggested that Shoigu may have been campaigning for a slowdown or suspension of western military aid to Ukraine, possibly weakening NATO and making scare-mongering comments”. It should be noted that the ISW added: “It is unlikely that the Kremlin is preparing a false-flag dirty bomb attack at this time. Instead, Shoigu’s remarks are part of a long-standing Russian information campaign.”