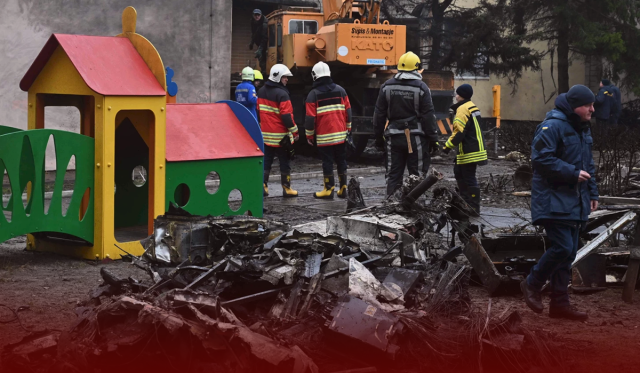 As Ukraine continues to deal with the tragic loss of its Interior Minister in a helicopter crash, Russian President Vladimir Putin has stated that he is confident in Moscow’s eventual victory in the ongoing war. During a visit to a St. Petersburg factory that produces air defense systems on Wednesday, Putin expressed his belief that despite recent military setbacks, Russia will ultimately prevail in the conflict that has been ongoing for nearly a year.

Putin added that the Russian people’s unity and solidarity, the fighters’ bravery, and the military-industrial complex’s work guaranteed victory in the ongoing conflict. Earlier, the Russian leader participated in an event with veterans to commemorate the eighty anniversary of lifting the World War II siege of St. Petersburg, which was blockaded by Nazi German forces for almost nine hundred days.

As Ukraine struggles with the aftermath of a fatal helicopter crash claiming the life of its interior minister, Putin has declared that Moscow’s victory in the war is inevitable. He stated that he had no doubt Russia would emerge victorious despite the series of military setbacks pic.twitter.com/45jlNmE6EG

Further, he said that Russia is engaged in the conflict in Ukraine to defend ethnic Russians and Russian speakers whom Moscow claims are facing systematic discrimination in Ukraine. On the other hand, the government of Ukraine denies this claim and argues that Moscow has used it as an excuse to carry out an aggressive land grab.

Just hours before Putin’s statement, the Ukrainian authorities reported that 14 people, including Interior Minister Denys Monastyrskyy and other senior officials from the ministry, were killed in a helicopter crash on the outskirts of Kyiv, the capital of Ukraine. According to the Ukrainian State Emergency Service, one child was among the casualties, and 25 others were injured in the incident that occurred on Wednesday in Brovary.

Denys Monastyrskyy, 42, who was in charge of the Ukrainian police and other emergency services and was among the casualties, is the highest-profile Ukrainian official to have been killed since the Russian attacks started last February. The cause of the helicopter crash, which was on its way to front-line positions in the eastern part of the country, is not yet known.

Officials from Ukraine have not mentioned any attack from Russia in the area, and an investigation has been launched. President Volodymyr Zelensky has referred to the crash as a dreadful tragedy that has caused terrifying pain. The President has directed the Security Service of Ukraine, in partnership with the National Police and other relevant agencies, to investigate the incident thoroughly.

Monastyrskyy received condolences from Ukraine’s allies in the West, with the United Kingdom’s Home Secretary, Suella Braverman, praising him as a strong supporter of the Ukrainian people during Russia’s illegal invasion. He shared this information through a Telegram post and also paid tribute to the Interior Ministry leadership team who passed away, describing them as “true patriots.” in response to the incident, Ukrainian Prime Minister Denys Shmyhal announced that national police chief Ihor Klymenko would be serving as the Acting Interior Minister.

A Sad Day for Ukraine

This helicopter crash occurred during a difficult time in the war for Ukraine, shortly after Russian forces attacked a residential building in the central city of Dnipro, resulting in 45 deaths, including six children. Olena Zelenska, Ukraine’s first lady, expressed her sadness at the news while at the World Economic Forum in Davos, Switzerland, saying, “Another very sad day today – new losses.”

The session began with a solemn tribute of 15 seconds of silence to commemorate the loss of life among Ukrainian officials. Chancellor Olaf Scholz of Germany, who is facing growing calls to dispatch tanks to Ukraine, spoke of the crash and said it highlights the heavy toll being taken on Ukraine because of the ongoing conflict.

In the meantime, Russia’s Foreign Minister, Sergey Lavrov, stated that Moscow did not see any opportunities for peace negotiations and emphasized the Kremlin’s stance that talks cannot take place with President Zelensky’s administration. Russia maintains that negotiations can only occur if Ukraine acknowledges Russia’s territorial claims in the eastern and southern regions of Ukraine. Kyiv asserts that they will continue to fight until all Russian troops have been removed from the country.