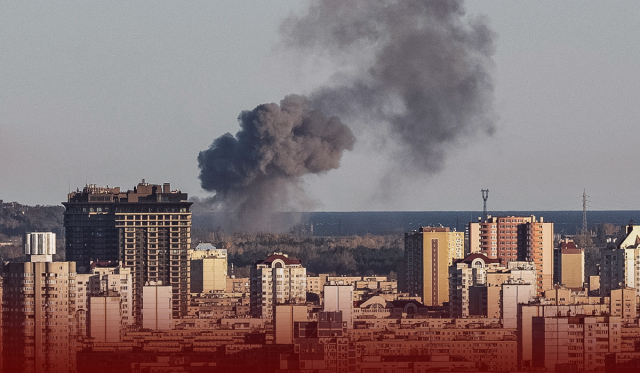 During the latest wave of Russian strikes across Ukraine, Kharkiv, Ukraine’s second city, was without power for hours. The Russian military fired 76 missiles and conducted drone attacks on Friday, causing damage to nine power stations. In the aftermath of the storm, Kharkiv’s mayor reported “colossal” damage to the city. However, approximately 55% of residents could reaccess electricity after the evening storm.

The latest wave of Russian strikes targeted several energy stations throughout the country, resulting in several hours of power outage in Kharkiv. Officials in the region report that Russian forces launched 76 missiles, along with drone attacks, on Friday.#Russia #Kharkiv pic.twitter.com/jHuujz0ogo

The BBC reported that one resident, Anastaisa, informed them that the strikes had begun on Friday. Moreover, the mother of a two-month-old child said the lights began to blink in minutes. Within 10 seconds, we lost power, and everything went silent, ending the power outage. Due to the pumping stations being unable to operate when there is no power in the city, there is also no water. It means that, technically, we have an impoverished town without power or water.

Kharkiv’s regional administration chief, Oleg Synegubov, announced in the evening that electrical supplies had been restored to 55% of city residents and 85% of residents in the northeastern part of the city. A full power restoration is expected by midnight, according to employees in the energy sector. However, Ukrenergo, the operator of Ukraine’s power grid, has warned that the power supply could take longer to restore due to the damage.

In a statement, the organization noted that the country’s energy system had suffered a loss of capacity of more than half and that priority would be given to “critical infrastructure, including hospitals, water supply facilities, heat supply facilities, and sewage treatment plants.” In a statement to the BBC, Yuriy Sak, adviser to the Defence Ministry, said the emergency services were working to restore electricity. However, the situation remains challenging. Damages caused by Russian attacks are becoming more difficult to repair due to their frequency.

In addition, a residential building was struck in Kryvyi Rih, three people were killed, and 13 others were injured. In Kherson, one person was killed, and one was injured. A complete shutdown of the metro system in the capital, Kyiv, was reported. General Valeriy Zaluzhny, Commander-in-Chief of the Ukrainian Air Force, reported that Ukrainian air defenses had intercepted sixty of the seventy-six missiles fired by the Russians.

Officials with the Kyiv city government have reported that around 40 missiles have been launched at the capital alone – one of the largest barrages since Russia invaded on February 24. In addition, officials reported that air defenses destroyed 37 aircraft. Oksana, 42, lives in the capital and says, “It’s very stressful, but now I am used to it.” Our children should not be subjected to this and should not be confined to basements or shelters.

Although most of Ukraine is experiencing temperatures below freezing, Russia is accused of “weaponizing winter” by striking critical facilities. The Russian attacks also resulted in the loss of power in the northeastern Sumy region that borders Russia and Poltava and Kremenchuk in the central part of the country. In the south, fifteen rockets were reported to have been fired at Zaporizhzhia, while in the capital, Mayor Vitali Klitschko reported that several areas had been destroyed.

According to him, water supplies had been affected by damage to its energy infrastructure, while metro lines in the city are currently not operating. In addition, Russia has launched over 1,000 missiles and Iranian-made attack drones since the attacks began on October 10. Most of these missiles have been intercepted by Russian air defense systems. More than a hundred missiles and drones were employed during the biggest barrage, which took place in mid-November.

In a recent statement, Volker Turk, the director of the United Nations human rights department, warned that further attacks on power facilities could “aggravate the humanitarian situation and lead to additional displacement.” In a statement issued on September 22, Prime Minister Denys Shmyhal termed the latest wave of strikes “another attempt to commit genocide against the Ukrainian people.” It is common for electricity to be available for a few hours on a daily basis in some areas.

The 21-year-old Yelyzaveta said, “I am angry.” Because Russia destroys our lives now, we have become accustomed to it. The most important thing is that Russia is not present in our lives. Anastasia stated that life had become more challenging with the onset of winter. “During the day, it is tolerable, and I can manage the situation, but at night it becomes a problem because I cannot see clearly, have to measure baby formula, and attend to my daughter,” she said.

“Being without power creates a great deal of tension and stress, so we survive the night, and when the sun rises, things begin to improve, but it cannot be compared to a regular day.” When the strikes occurred, European Union officials and businesses were targeted with the ninth wave of sanctions. Almost two hundred individuals and entities have been added to a blacklist of individuals and entities banned from entering the country.

Lirisa Falkovskaya, the head of the Department of State Policy for the Protection of Children’s Rights in Russia, is among those sanctioned. She is charged with “illegally transporting Ukrainian children to Russia and adopting them by Russian families.” In addition, several regional governors of Russian regions have been sanctioned on the same charges. Over 2,000 Ukrainian children have been deported and adopted by officials since the start of the war, according to the European Union.

To the Geneva Convention Article 49, Ukrainian officials believe the deportations are a form of a war crime. Moreover, Ukrainian forces have been accused of shelling a town and a village overnight in the Luhansk region by Russian-backed proxy officials in Ukraine’s eastern Donbas region. However, how the deaths occurred could not be confirmed.