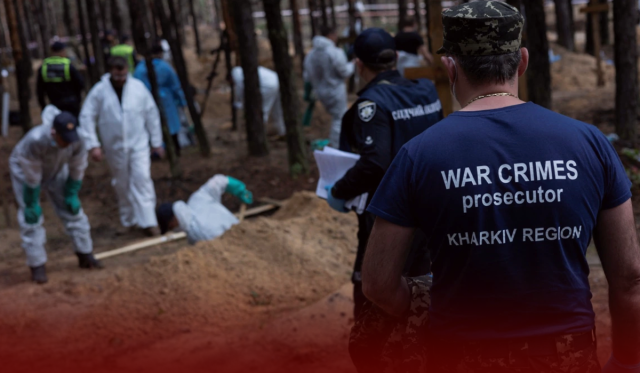 Earlier this week, a senior U.S. diplomat accused Russian forces invading Ukraine of systematic war crimes. He said abuses occur on a scale that suggests top Kremlin officials are both aware of and supportive of the violations. However, the Russian government said the allegation was unsupported by evidence, and there was no evidence of Ukrainian atrocities.

US diplomats accused the Russian forces invading Ukraine of committing “systemic” war crimes, asserting that abuses may be happening on a scale suggesting that Kremlin leaders are aware of and supporting them.#WarCrimes #RussiaIsLosing #Russia #UkraineWar #UkraineRussiaWar pic.twitter.com/Ls0SEsr9sD

In addition to the fact that Russian forces have committed systemic war crimes throughout the regions where their forces have been deployed, we have mounting evidence that they have violated the U.N. Charter,” Van Schaack remarked. A deliberate attack that affects the civilian population or elements of the civilian infrastructure in an indiscriminate, disproportionate, or deliberate manner is such an attack. In addition, we are seeing some abuses of prisoners of war and civilians in military custody and attempts to conceal these abuses.

It’s Up to the Chain of Command

As Van Schaack stated, “Russia’s forces are committing atrocities not because of rogue units or individuals, but because of an ongoing pattern of abusive behavior across all areas where they are engaged.” Her remarks were explicitly directed at the “filtration” camps, which have processed and deported untold numbers of Ukrainian civilians, including many children, to Russia.

She argued that the size of the operation suggests that the Kremlin was directly involved. “The prosecution will follow the evidence where it leads, but when we observe such systemic actions, including the creation of a vast filtration system, it is difficult to imagine how these crimes can be committed without responsible action reaching all levels of the organization,” she explained.

Nevertheless, Van Schaack’s comments did not represent the first time a senior U.S. official accused Russia of war crimes. Experts speculated that the comments signaled a shift in the administration’s attitude toward prosecutions. Van Schaack stressed the importance of the “systemic” nature of the alleged war crimes in an interview with David J. Scheffer, a fellow at the Council on Foreign Relations.

“Scheffer is formally acknowledging that the Russian military’s commission of war crimes does not represent an isolated string of criminal offenses, but rather is part of a larger plan and is being carried out on a large scale,” she explained. “This statement is not intended to be taken lightly because determining that war crimes are being committed systemically requires sophisticated planning, organization, and execution, which can only be carried out at a senior level.”

In this case, the investigation takes on a more substantial and broader significance since you will be reaching the highest levels of the government. The purpose of the proposal is to establish superior responsibility for heads of state, such as Russian President Vladimir Putin, or command responsibility for military commanders within the Ministry of Defense.”

New Tone from the United States

In this case, several ongoing inquiries have been actively supported by the Biden administration, including a direct collaboration with the International Criminal Court, despite the United States not always supporting efforts to establish standards for international criminal law. “The level of U.S. involvement in international criminal law is truly remarkable, especially in light of the previous administrations’ positions,” Marti Flacks, the Human Rights Initiative at the Center for Strategic & International Studies Director, told Voice of America.

“That illustrates the severity, widespread nature, and systematic nature of criminal activity in Ukraine at this stage.” Historically, the prosecution of war criminals in conflict has been slow, including during the Yugoslav wars in the 1990s. Nonetheless, Flack suggested that it is likely that more cases will be filed indicting Russia for flagrant violations of international law as the result of the combination of surveillance technology and a willingness on the part of Russia to violate international law flagrantly.

She anticipated that some charges would be brought within the next few months rather than the next few years. “I would like to know how long it will take to get to a prosecution requiring a defendant to be present. So it may be a long game for us to maintain that evidence and have those procedures ready to go in case… we can arrest someone.”

Prosecutions May be Sealed

Van Schaack said Russian personal cases might be complicated because the accused remains in Russia. Under such circumstances, prosecutors may issue arrest warrants and indictments “in absentia” to establish evidence against the accused person. A spokesperson for CSIS indicated that she would expect some charges to be sealed in order not to alert individuals to the existence of active arrest warrants. She stated that it was convenient. People should not be made aware that they are wanted, discouraging them from traveling to an area where they might be arrested.”

Despite the video interruption, a second scene, which appears to have been shot later, shows the dead Russians still lying on the ground in similar positions, but now they are lying in pools of blood. When asked to comment on the video, Van Schaack stated that U.S. officials closely monitored the situation and stressed that both parties must adhere to the laws of war during the conflict.

However, she added, “The extent to which Russian forces have engaged in criminal activity is enormous compared to what we have seen against Ukrainian forces.” Moreover, the response to such allegations is also vastly different. Russia will, inevitably, respond by propagandizing, denial, misinformation, and disinformation, whereas Ukrainian authorities have generally denounced abuses, acknowledged them, and promised to investigate them.”

The Russian embassy in Washington took Facebook to respond to Van Schaack’s statement. As part of the statement, Ambassador-at-Large for International Criminal Justice Beth Van Schaack noted that Ukrainian neo-Nazis had murdered Russian military personnel captured by Ukrainian forces. Yet, despite being aware of the massacre of our unarmed soldiers, the official refused to directly condemn it, even though American journalists, who did not ignore the tragedy, authenticated the relevant video materials.”

The diplomat cynically commented that the Russian Army is associated with “many times more war crimes” than the Ukrainian Armed Forces. Although furthermore, our soldiers have failed to provide evidence of violent acts they are alleged to have committed, but the State Department was unable to do so again.”