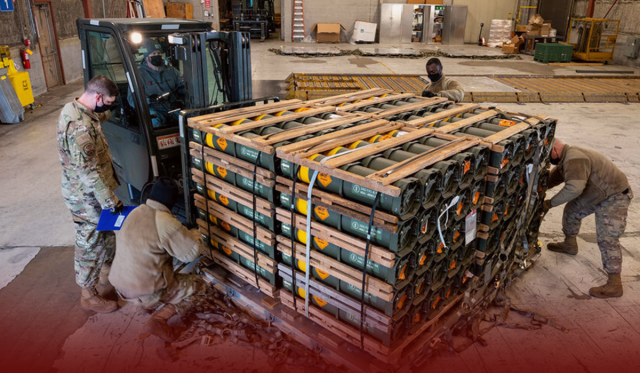 The United States will send ammunition and generators to Ukraine for $400 million, the White House announced Wednesday. As Russia continues to target Ukrainian energy sources and winter approaches, the United States is pulling gear from its own stockpiles to deliver support to Kyiv as quickly as possible. Since Russia attacked Ukraine on February 24, the United States has contributed more than $19 billion in weapons and other equipment to the country.

The White House announced that an additional $400 million in ammunition and generators would be delivered to Ukraine. As Russia continues to attack Ukraine’s energy resources and winter approaches, the US is pulling gear from its stockpiles to support Kyiv as quickly as possible. pic.twitter.com/faQk6SNF95

Using presidential drawdown authority, the Pentagon will be able to deploy weapons from its stock and quickly send them to Ukraine as part of the new military aid package. The items included in the latest package are 200 generators and an unknown quantity of additional rounds, which are supplied to Ukraine for NASAMS air defense systems and HIMARS artillery systems. In addition, according to the Pentagon, 150 heavy machine guns equipped with thermal sights are being delivered to Ukraine, 10,000 120mm mortar rounds are being offered, as are twenty million rounds of small arms ammunition.

Since the fierce firefight began nine months ago, both sides have been firing thousands of munitions daily, ranging from small arms bullets to truck-sized cruise missiles. U.S. military aid to Ukraine has totaled 104 million rounds of small arms ammunition, indicating the intense ground battle. The Pentagon stated that additional air defense capabilities remain a top priority due to Russia’s relentless and brutal attacks on Ukrainian critical energy infrastructure by missiles and drones.

The Russian military launched a missile attack on Kyiv’s Ukrainian capital city, resulting in one person’s death and another’s injury. An official from the Kyiv city military administration confirmed that the attack had damaged a two-story building, and authorities advised residents to remain in shelters until the air alert ended. In a resolution approved by the European Parliament, Russia has declared a state sponsor of terrorism. The European Union has described the Kremlin’s deliberate attack on civilians in Ukraine as a war crime, emphasizing its disapproval of the Kremlin’s policies.

The Russian government has denied that civilians are being targeted. However, for the second time this week, the International Atomic Energy Agency has expressed concern about the ‘precarious’ situation at the Zaporizhzhia Nuclear Power Plant. Due to continued Russian missile attacks, the plant suffered heavy damage over the weekend and was forced to go into “full blackout mode” on Wednesday. “After being repeatedly shelled just a few days ago, the latest incident at Europe’s largest nuclear power plant demonstrates the increasingly precarious security and safety situation,” Rafael Mariano Grossi, Director General of DEME, stated.

Grossi also emphasized the vital importance of off-site power supply for nuclear sites during armed conflicts, which he identified earlier this year as one of the seven indispensable pillars necessary for nuclear safety. Yet, based on the diesel generators, the plant operates as if there is no power from off-site. “A nuclear reactor requires power even in shutdown mode and when it does not produce electricity anymore for cooling and other essential nuclear security and safety functions,” the International Atomic Energy Agency stated.

The Russian missile attack on Ukraine’s battered electric grid Wednesday left cities without electricity, water, and public transportation, compounding the hardships experienced by millions this winter. Nuclear plants and internet links were also taken offline during the aerial mauling of power supplies. As a result, blackouts extended into Moldova from the neighboring country.

The outages cascaded across multiple regions due to various attacks in quick succession. In a statement, the Ukrainian Energy Ministry said that “the huge majority of electricity consumers” were affected. Moreover, the city’s mayor reported that trams and trolleybuses were not running as the city in western Ukraine lost power and water. The mayor of Kyiv stated that the entire city had lost water. The mayor of Kharkiv, Ukraine’s second-largest city, said the power went out, and public transportation was suspended.

A meeting of the Security Council has been requested by Ukraine’s ambassador to the United Nations, as instructed by President Volodymyr Zelenskyy. In an interview conducted on Wednesday, Zelenskyy announced that Ukraine would present a resolution condemning “any form of energy terror.” About Russia’s potential veto, Zelenskyy stated, “It is absurd that a veto right is secured for the party that wages this war, this criminal war.”

The council must respond to Zelensky’s statement, saying, “We can’t be held hostage by a single international terrorist.” He invited the UN to assist in examining and evaluating Ukraine’s critical infrastructure. A Kyiv strike claimed three people’s lives and injured eleven others. It is reported that four more people have been killed, and 35 others have been wounded in the broader region of Kyiv. The explosion occurred as I was ascending the escalator. Passenger Oleksii Kolpachov recalled being on the Kyiv subway when the power went out suddenly. Upon exiting the subway, I saw a column of smoke.

Thousands of Ukrainians have been left without power following Russia’s widespread missile strikes, which caused multiple deaths and injuries. Ukraine will request an immediate meeting of the UN Security Council to discuss Russia’s missile strikes. Ukraine’s president, Volodymyr Zelenskyy, has stated that killing civilians and ruining civilian infrastructure are acts of terrorism. Despite the continued allegations of these crimes, the Ukrainian government continues to call for a resolute response from the international community.

The meeting was called by Zelenskyy earlier this week when the European Parliament declared Moscow a state sponsor of terrorism, a decision that he has repeatedly urged European allies, the United States, and others to adopt. As a result, the effectiveness of the UN Security Council is in doubt, even though Russia is a permanent member of the body. Furthermore, the Russian government might not have been held accountable for its international law and norms violations, as evidenced by its acquisition of four Ukrainian regions in September, since it is the only institution member with veto power.