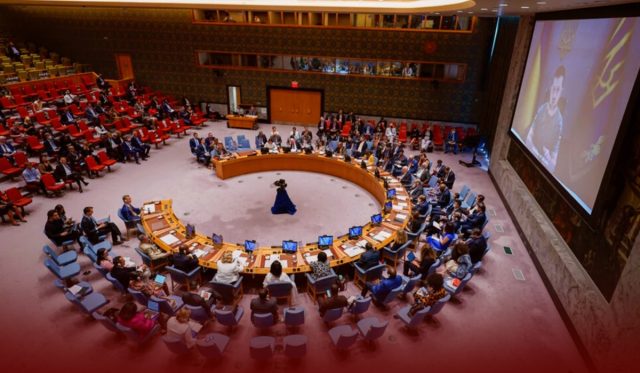 On Wednesday, Volodymyr Zelensky, the President of Ukraine, called Russian six months of aggression against his country insane and said that the world is interested in Ukraine’s security. President Zelensky told the United Nations Security Council meeting that today his country celebrates the 31st independence anniversary, and now everyone sees how much the world is dependent on Ukraine’s independence.

On this day, Ukraine gained independence from the Soviet Union. In a video address, the president stated that it is on the Ukrainian territory that the future of the world is decided. Further, he added that the world’s future is also being decided at the Zaporizhzhia nuclear facility and on the Donbas, Ukrainian seaports, and Crimea region. Moscow launched its invasion of Ukraine precisely six months ago, striking Ukrainian cities with missiles and bombs, killing and injuring thousands of civilians, and threatening nuclear security.

Moreover, the war severely impacted daily life by soaring the prices of food items, energy, and fertilizer globally. According to the World Food Program, forty-seven people are starving because of the ripple effects of the Russia-Ukraine war. President Zelensky added that even now, in this century, the world still has to struggle to save tens of millions of individuals in many nations from this artificial hunger. He also said that Russia alone provokes artificial hunger with its insane invasion.

The agriculture sector of Ukraine produced desired food to feed four hundred million people globally before the war. After the Russian attack, over twenty million metric tons of grain struck in grain storage and on ships that Russian forces blocked in the Black Sea. Last month, both countries signed a deal in Istanbul which allowed some relief, with approximately seven hundred seventy thousand metric tons of grains, including other food products, having sailed from Ukrainian seaports.

António Guterres, the United Nations Secretary-General, urged Russia to end the Ukraine war as the nation marks its 31st independence anniversary from the Soviet Union. Guterres told the United Nations Security Council that the consequences of this war are being felt far beyond Ukraine. Guterres added that on the independence anniversary, he wished to congratulate Ukrainians.

The U.N. Chief also witnessed the progress of a grain export agreement between Ukraine and Russia. Furthermore, the deal is progressing on the right path. However, Guterres warned about the need to get more fertilizer out of Ukraine and Moscow to further calm product markets and lower prices at the consumers’ end. In addition, he said that if the world leaders do not stabilize the fertilizer market this year, there will not be enough food in the next year.

The United Nations Secretary-General also welcomed the assistance for a mission to the Zaporizhzhia nuclear facility. It said the United Nations would continue to observe the situation at the site. Russian troops seized the atomic plant and hit it with repeatedly shelling, which Russia and Ukraine blamed on each other. On Tuesday, the International Atomic Energy Agency stated that it would visit Zaporizhzhia nuclear facility in Ukraine within some days of dialog to gain access.