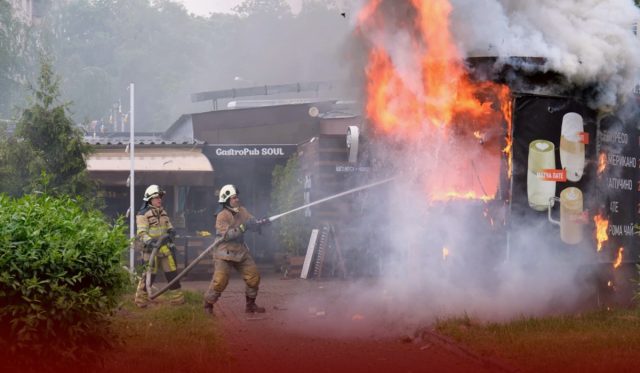 Three-month-old war morphs into what some Western officials describe as a “scrap” without end as Russian forces in northeastern Ukraine appear to launch a counteroffensive on Thursday. Kharkiv, Ukraine’s second-largest city, reported that Russian shelling killed at least seven civilians and wounded seventeen while heavy fighting raged north and east side of the city.

As a result of a Ukrainian counteroffensive earlier this month, Russian forces were gradually pushed from Kharkiv within close proximity of the border. Despite this, officials said it appeared that the Russian troops had retaliated.

Governor Oleh Synehubov of the Kharkiv region said it is too early to relax. “The enemy terrorizes the civilian population once again insidiously.” Despite continued success against Ukrainian forces throughout the Donbas region, Russian officials have not yet commented on the developments near Kharkiv.

According to a senior U.S. defense official, “no major changes” have occurred on the ground despite reports of increased fighting around Kharkiv. In an interview with reporters on the condition of anonymity, the official said that Ukraine has continued to push Russian forces away from the city. The range within the Russian border is a few kilometers to more than ten kilometers.

However, other parts of eastern Ukraine showed incremental gains for Russia, such as Popasna in the north and Sievierodonetsk in the east. In the face of Russian advances in both Sievierodonetsk and the nearby city of Lysychansk, Ukrainian officials acknowledged Russia surrounding Ukrainian troops in the east on Thursday. In an interview with Reuters, Ukraine’s general staff said that Russia has the advantage, but we will do everything we can to counter it.

As Western countries accuse Moscow of escalating the war by exacerbating the international food crisis, Russia has increased its push on the ground in Ukraine. Earlier this week, British Foreign Secretary Liz Truss accused Russian President Vladimir Putin of trying to hold the world hostage by blocking food shipments from Ukrainian ports – a move Ukrainian officials described as blackmailing.

According to Pentagon press secretary John Kirby, Moscow is weaponizing food. He added that it is just another brutal way of waging an unprovoked war has been. In Ukraine, Pentagon officials projected that around twenty-two million tons of grain are waiting to be shipped, but the Moscow blockade has prevented this from happening.

“This will largely be a European concern…”

re #Russia–#Ukraine and grain shortages