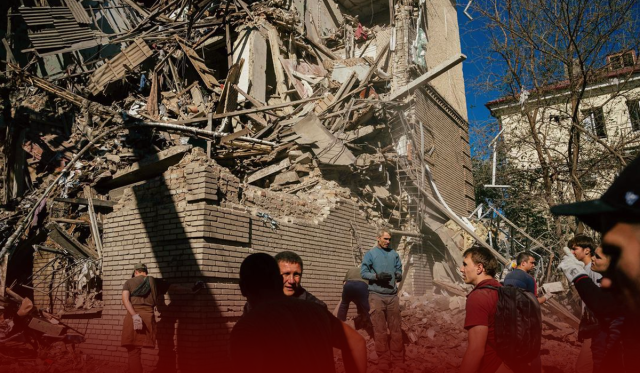 Early on Saturday, Russian military strikes rocked the northeastern Ukrainian city of Kharkiv, sending pillars of smoke into the sky and triggering multiple secondary blasts. Fortunately, there’re no causality reports. The explosions came after Moscow concentrated strikes in its ever more troubled incursion in its neighboring country on regions it illegally seized, while deaths from previous rocket attacks on residential buildings in the southeastern Zaporizhzhya city increased to fourteen.

Ihor Terekhov, a Ukrainian politician & Mayor of Kharkiv, said on Telegram instant messaging service that early-morning blasts were amid rocket attacks in the city’s center. Terekhov added that the explosions caused fires at a healthcare center and a non-residential structure.

Kharkiv Mayor Ihor Terekhov reported that Russia targeted downtown Kharkiv, hitting a hospital early on Oct. 8. The building caught fire. There is no information on casualties at the time of the publication.

Additionally, in a strong rebuke to Vladimir Putin, the President of Russia, and his conduct of the worst armed conflict since the Second World War, the Oslo-based Norwegian Nobel Committee presented the Noble Peace Prize to human rights activists from Putin’s Russia, Ukraine, and Belarus.

Recently, the Kremlin illegally claimed four Ukrainian regions in the East and South, including Zaporizhzhya Oblast in the country’s southeast, which is home to the Zaporizhzhya Nuclear complex – Europe’s largest – whose VVER-1000 PWR reactors were shut down in September.

The salt-mining city of Bakhmut, which was once home to 73,212 residents (2020 estimates), would be a significant success if Moscow had any expectation of securing the area after violently attacking Ukraine late in February. Instead, the heavy bombardment was audible from the Urban-type settlement of Zaitseve, Veselaya Dolina, and Otradovka, which are now seemingly under the control of forces faithful to the Moscow-backed separatists DPR now illegally seized by the Kremlin.

Previously on October 5, the President of Russia signed the final documents to forcibly seize the four Ukrainian areas – Zaporizhzhya, Kherson, Donetsk, and Luhansk People’s Republic. According to Pavlo Kyrylenko, the Governor of the Donetsk Oblast, Moscow attacks on Oct. 7, took lives of at least six people in Zarichne, Ocheretyne, and Bakhmut and Pavlivka.