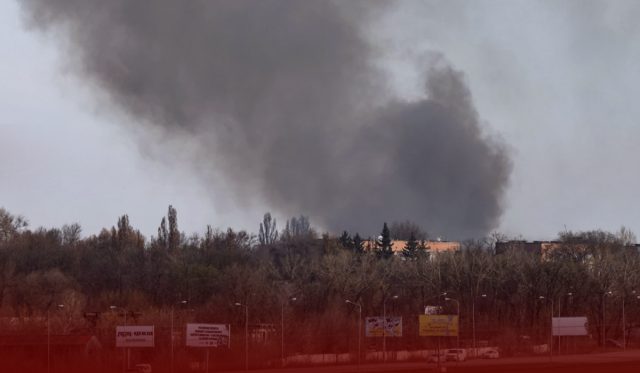 On Sunday, the Russian forces initiated attacks on a school and apartment buildings in eastern Ukraine, according to reports of Luhansk officials. On the other hand, the officials Pled to escape the area before it was too late. Serihy Haidai, the Governor of Luthansk, said three residential buildings burned down in Severodonetsk, and rescue teams evacuated two elderly residents.

In southeastern Ukraine, Dnipro Governor Valentyn Reznichenko said that Russian troops hit targets all over the region, resulting in the wounding of a person. Furthermore, the state railway and Ukrainian officials established and announced new evacuation routes but raised concerns that the Friday Russian missile attack on a railway station in Kramatorsk killed around fifty-two people.

Russian troops launched shelling at residential buildings and a school in eastern Ukraine. Serihy Haidai, the Luhansk Governor, said that 3 residential buildings in Sverodonetsk burned down, and rescue teams evacuated two older adults, but fortunately, there were no casualties. pic.twitter.com/P5zSDdlDS0

Ukrainian President Volodymyr Zelensky and U.K. Prime Minister Boris Johnson Saturday walked through streets that Moscow recently controlled or was under near-continuous attacks before Russia deployed its forces to focus its attacks on the eastern Donbas region. Johnson said that the United Kingdom would send one hundred and twenty armed vehicles, including new anti-ship missiles, to Ukrainian forces. The recent announcement is a part of continuous military support to Ukraine to resist and fight Russian troops.

West is not Doing Enough to Help Ukraine

The Ukrainian president continued to convey that the Western countries were not doing enough to help Ukraine. Still, Jake Sullivan, the United States National Security Adviser, defended what it had done. Sullivan told the State of the Union show on CNN that the scale, scope, and speed to equip Ukrainian forces is unprecedented. In addition, he said that the U.S. would continue to rally the world to back Ukraine.

Sullivan said that Moscow misjudged its 24th February attack, thinking it would be hailed with open arms into Ukraine. However, in a separate interview, Sullivan told This week of ABC News that Moscow was forced to acknowledge significant forces losses this last week because it didn’t take control of the capital Kyiv and the rest of Ukraine as it had likely to achieve instantly.

Sullivan said the United States believes that individual Russian troops carried out the massacre of Ukrainian civilians at their failure to take control of the area across Kyiv. Further, he added that the responsibility for the slaughter of civilians lies at the Russian leader’s feet. Finally, Sullivan said that the United States would continue to crush the Russian economy and currency with severe sanctions, estimating its economy will shrink by ten to fifteen percent this year, falling it instantly as a world economic power.

On Monday, the Russian officials said it destroyed Ukrainian air defense systems in Ukraine over the weekend. The initial invasion of Moscow stalled on many fronts as it met with firm resistance from the Ukrainian military, who stopped the Russian army from capturing Kyiv and other cities. Moreover, Major General Igor Konashenkov, the spokesperson for Russian Defense Ministry, said the troops used cruise missiles to destroy four air defense missile launchers (S-300) on the southern borders of the central city of Dnipro. He said that Sunday’s strike also hit around twenty-five Ukrainian soldiers.