Home Updates S Korea & US Fire Missiles into Sea in Response to N... 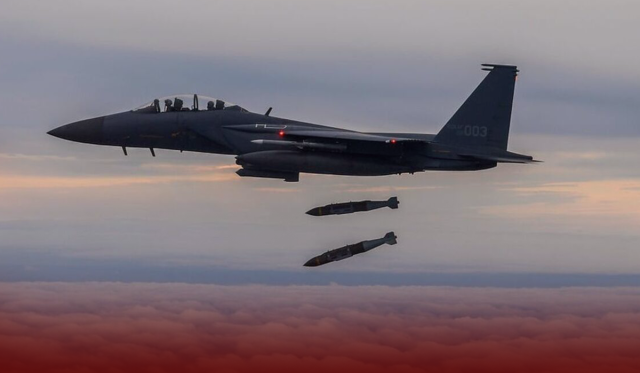 In response to North Korea’s launching of an unidentified ballistic missile over Japan, the U.S. and South Korea launched missiles into the Yellow Sea on Wednesday and conducted a bombing drill. In a joint statement, the Joint Chiefs of Staff (JCS) of South Korea confirmed that it fired four Army Tactical Missile Systems and one Hyumoo-2 ballistic missile. On the outskirts of Gangneung, a second short-range Hyumoo-2 has malfunctioned and landed on the ground.

In response to North Korea firing an unidentified ballistic missile over Japan on Wednesday, the US and South Korea fired missiles into the sea. Additionally, they conducted a bombing drill in the Yellow Sea.#SouthKorea #UnitedSattes #NorthKorea #BallisticMissile #Japan #missile pic.twitter.com/16RYQ3WUko

No injuries were reported, and teams started an investigation to determine the cause of the malfunction. There was considerable concern among residents of the coastal city that the crash was the result of an attack by North Korea. However, the South Korean military acknowledged the incident in the hours following the crash. A spokesperson for Japanese Cabinet Secretary Hirokazu Matsuno told reporters Tuesday that the missile was launched at 07:22 a.m. and exploded outside Japan’s exclusive economic zone twenty-two minutes later.

Some residents of the Hokkaido and Aomori prefectures were evacuated on Tuesday morning because of an evacuation order issued by the Tokyo Metropolitan Government. North Korea launched an intermediate-range ballistic missile (IRBM) from North Korea’s northern Jagang area, traveling 4,500 kilometers at a 970-kilometer altitude. He called it an intermediate-range ballistic missile (IRBM). It has been reported that they condemned the missile launch during a phone call between Japanese Prime Minister Fumio Kishida and President Joe Biden on Tuesday.

A joint statement from the two countries condemned North Korea’s missile launch in the strongest terms. It also identified the launch as a danger to the Japanese people, a destabilizing factor for the region, and a violation of the resolutions of the United Nations Security Council. The article added that Biden reiterated the administration’s “ironclad” commitment to the defense of Japan. Yasukazu Hamada, Japan’s Defense Minister, said the missile flew over Japan for approximately one minute, soaring far beyond previous intermediate-range missiles, estimated to be 4,600 kilometers.

It landed in waters approximately 3,200 kilometers east of the country. The region has had increased tension since the missile was shot over Japanese territory. In a statement Tuesday, a spokesperson for the United States National Security Council, Adrienne Watson, described this decision as “dangerous and reckless” and demonstrating North Korea’s disregard for the United Nations Security Council resolutions and global safety norms.”

During North Korea’s last IRBM test in late January of this year, it was explained that its lofted trajectory was deliberate to ensure the security of neighboring countries. The target of the test appeared to be Japan at the time. Based on the missile’s range, Guam was believed to be within reach of the missile. This range is likely to be exceeded by the most recent ballistic missile launch. The distance between Pyongyang and Guam, home to a U.S. strategic naval base, is approximately 3,400 kilometers.

Naval Exercises between South Korea and the U.S.

Recently, tensions have been increasing on the Korean Peninsula. Pyongyang’s launch on Tuesday is the latest in a series of short-range ballistic missile launches on September 25, 28, 29, and October 1. In addition, for the first time in five years, the USS Ronald Reagan supercarrier participated in the fifth nuclear test within ten days following a major joint naval exercise between the U.S. and South Korea.

Nuclear testing may also resume at some point in the future. Last week, South Korea’s spy agency told lawmakers that a seventh nuclear test, should it materialize, would most likely fall between October 16 – the first day of China’s National Congress of the Communist Party – and November 8, the United States midterm elections.

President Yoon Suk Yeol of the Republic of Korea warned against any nuclear provocations from North Korea during an Armed Forces Day ceremony held on Saturday. However, he said that if North Korea decided to use nuclear weapons, the allies would be ready to respond firmly and overwhelmingly.