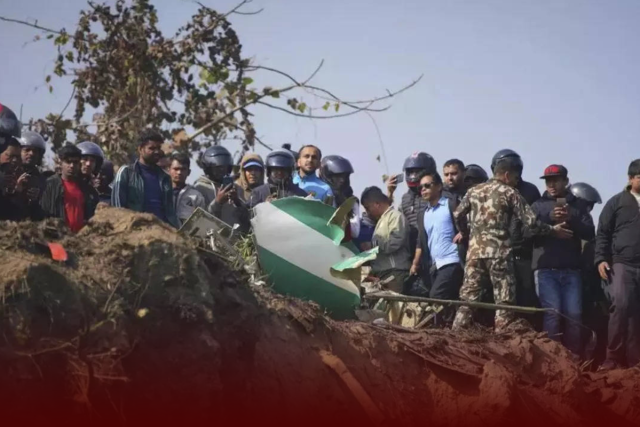 The search for the remaining individuals from the fatal plane crash in Nepal has resumed. The crash, which resulted in the loss of many lives, is considered the deadliest in the past 30 years in the Himalayan nation. The nation has declared a day of mourning as rescue operations continue. Out of the 72 passengers on board the ATR 72 aircraft operated by Yeti Airlines, 68 bodies have been recovered.

On Monday, a search team located both the cockpit voice recorder & flight data recorder of a passenger flight that had crashed on Sunday, resulting in the death of at least 68 individuals, making it Nepal’s most fatal plane crash in the past 30 years, as reported by the officials pic.twitter.com/nBrzzL7r6C

The incident occurred in the tourist city of Pokhara, just moments before the plane was set to land on Sunday under clear weather conditions. The aircraft involved in the tragic incident was on a planned flight from Kathmandu to Pokhara, a popular destination known for its beautiful Annapurna mountain range. In addition, the plane carried a diverse group of passengers, including fifty-seven Nepalis, five Indians, four Russians, two South Koreans, and one individual each from Australia, Argentina, France, and Ireland.

The plane was scheduled to take 27 minutes flight. However, the crash site was littered with debris from the aircraft, including twisted and broken passenger seats and the wreckage of the white-colored fuselage. Moreover, the rescue team faced challenging conditions, including low visibility and cloudy weather, as they searched the 300-meter-deep river gorge for any remaining passengers. The search continued more than 24 hours after the crash.

No Hopes of Survivors

As night fell, soldiers employed ropes and stretchers to retrieve the bodies from the ravine, and the operation resumed the following day. According to senior local official Tek Bahadur KC, sixty-eight bodies have been recovered, and the search for the remaining four continues. He stated that teams should continue until they get the bodies” Even though the chances of finding survivors are slim, the official added that they pray for a miracle.” The authorities said they would return bodies to the families after identification and examination.

The reason for the accident is yet to be determined. However, AFP and The Associated Press, which depicted the twin-engine aircraft making a sudden and steep turn to the left while approaching Pokhara airport, followed by a loud explosion, confirmed a video that surfaced on social media. According to an AP report, at least one observer claimed to have heard cries for help from the burning wreckage.

A local inhabitant, Bishnu Tiwari, who quickly went to the crash location near the Seti River to assist in the search for bodies, mentioned that dense smoke and an intense fire hindered the rescue operations. Tiwari stated, “The fire was so intense that we couldn’t get close to the wreckage. I heard someone crying for help, but we could not assist him and save his life due to the smoke and flames.

On Monday, the search team located the flight data recorder & cockpit voice recorder. According to Teknath Sitaula, an official at Kathmandu airport, the recorders were found in good condition and will be sent for examination as suggested by the manufacturer. The information on these recorders could aid in determining the reason for the aircraft’s crash.

Following the crash on Sunday, Prime Minister Pushpa Kamal Dahal immediately went to the airport. He also established a committee to investigate the accident and propose ways to prevent similar incidents in the future. In a statement on Sunday, ATR, the aircraft manufacturer based in France, expressed their condolences and stated, “Our first thoughts are with all those affected by this. ATR specialists are fully committed to backing both the investigation and our customers.

Since 2000, approximately 350 people have lost their lives in plane or helicopter accidents in Nepal. The Aviation Safety database from Flight Safety Foundation reports that there have been 42 fatal plane crashes in Nepal since 1946. Among the world’s fourteen highest peaks, eight of them are located here, including Mount Everest, which has unpredictable weather conditions that can make flying treacherous.

The Sunday crash is the most fatal in Nepal since 1992, where all 167 people on a Pakistan International Airlines flight were killed when it crashed into a hill while attempting to land in Kathmandu. According to an AP report, The European Union has prohibited airlines from Nepal from flying into the 27-nation bloc since 2013 due to inadequate safety standards. In 2017, International Civil Aviation Organisation recognized improvements in Nepal’s aviation industry, but the EU still insists on administrative reforms.