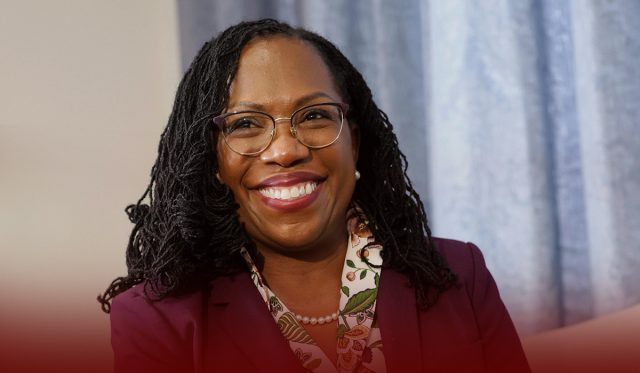 On Thursday, the United States Senate confirmed Judge Ketanji Brown Jackson to the Supreme Court, the first black female Justice in the 233-year history of the country’s top court. Three GOP leaders crossed the aisle to seal her appointment by a vote of fifty-three to forty-seven. Her appointment fulfills the presidential campaign promise of the United States President Joe Biden to put a black woman on the court.

The Senate Majority Leader, Chuck Schumer, called the move a joyous day for the country. Moreover, Kamal Harris, the Vice-President – the first black female to hold the office – oversaw the vote. Jackson will replace Justice Stephen Breyer after his retirement in June. The lifetime appointment of Jackson will likely see her on the bench for decades. Still, it will not shift the ideological balance of the Supreme Court, with its six-three conservative majority.

Jackson, 51, joined Biden and other White House senior staff members in the Roosevelt Room to watch the Senate vote results on her nomination to the top court. Biden tweeted that the confirmation of Justice Jackson was a historic moment for the country. He also posted a selfie picture of him with the recently confirmed Jackson. Further, he said they took another move making the highest court reflect the American diversity. He also said that Jackson would be an incredible Justice, and he felt honored to share this moment with her.

Judge Jackson’s confirmation was a historic moment for our nation. We’ve taken another step toward making our highest court reflect the diversity of America. She will be an incredible Justice, and I was honored to share this moment with her. pic.twitter.com/K8SAh25NL5

Jackson said that she agreed with GOP senators about the importance of abiding by the Constitution text as the founders intended it. During her confirmation, Democratic leaders touted her experience working as a public defender. Since Thurgood Marshall was the first black Supreme court Justice, she will be the first Supreme Court Justice to have career experience signifying criminal defendants. As an American and judge, Jackson stressed her concern for the rule of law and public safety.