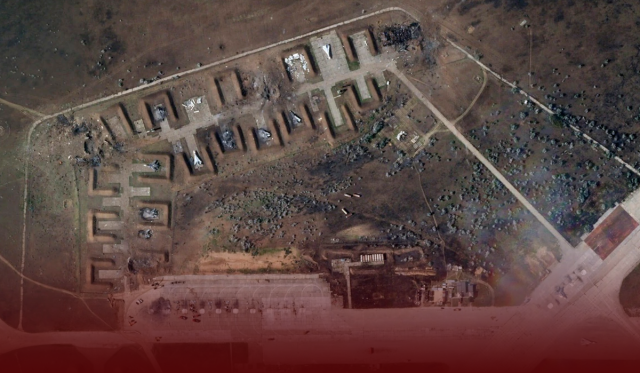 Despite Kyiv denying responsibility for the attack in Russian-occupied Crimea that left at least one person dead and eight wounded, a senior Ukrainian official believes partisan saboteurs were behind explosions at a Russian airbase. Incompetence on the part of the Russian government might also have contributed to the blasts, according to Ukrainian President Volodymyr Zelensky’s adviser Mykhailo Podolyak.

Earlier this week, following explosions at a Crimea Airbase, satellite images show massive damage and many demolished Russian warplanes. Those blasts killed one individual. However, Ukrainian forces refused to claim responsibility for the attack.#CrimeaAirbaseExplosions #Crimea pic.twitter.com/TJQNeXUGFx

Ukraine has not publicly asserted responsibility for the attack – although it has done so privately – while Volodymyr Zelensky, the adviser to the Ukrainian president, has suggested partisans may be involved. During his address on Wednesday evening, Zelensky mentioned the attack. A total of 10 combat aircraft were lost in one day by the occupiers: nine in Crimea and one heading towards Zaporizhzhia. A new set of losses for the occupiers included armored vehicles, ammunition warehouses, and logistics routes.

As part of its attempt to downplay the attack, Russia has denied that any aircraft were damaged and only acknowledged that “several aviation munitions detonated” at the facility’s storage area. There is, however, new evidence suggesting that a targeted attack may have taken place at the military base in Novofedorivka after satellite photos showed multiple fighter planes being blown up.

US-based Planet Labs’ images show large areas of scorched ground and runway damage along with charred remnants of military aircraft. Approximately four hours before the attack, the private satellite operator captured images of the damage to and destruction of at least eight jets parked outside around 8 am on 9 August. Comparing the before-and-after images of the base raises questions about the possible attack on a location over 100 miles (160 kilometers) from the frontlines.

In a series of tweets on Thursday, Bellingcat’s Eliot Higgins said he could not recall any time when Russia had lost such a large amount of air assets in one day. The craters are located at storage sites, indicating they were targeted. Everything else may have been destroyed when whatever was stored there blew up,” Higgins added.

Ben Wallace, the British defense secretary, told the BBC News that the UK was still trying to establish facts around the airbase explosions but believed western weapons were unlikely to have been involved. Instead, Ukraine’s armed forces were justified in attacking the airbase. As part of the air base’s regular missile strikes on Ukraine and patrols of the Black Sea, the Saky airbase is home to Su-30M fighters, Su-24 bombers, and the Il-76 transport plane. Crimea was seized by Moscow in 2014 but is recognized internationally as part of Ukraine.