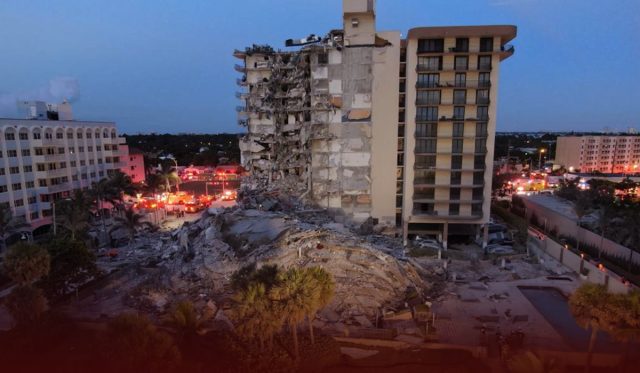 On Thursday, a beachfront condo building partly collapsed, resulting in the killing of one individual and trapping many others. Officials say that a twelve-story residential building instantly collapsed, due to which at least ninety-nine people are still missing. Rescue workers are desperately searching for any survivors in the debris of the building. Moreover, the building was forty-year-old, and the reasons for the collapse are still unclear.

Until now, the officials accounted for at least one hundred and two people, but it is not confirmed how many were there in the building at the time of the collapse. The rescuers evacuated a lot of people from the remaining structure of the building. Joe Biden, the President of the United States, permitted an emergency for Florida. It means the Federal Emergency Management Agency (FEMA) will help the agencies of Florida in the relief effort.

Hundreds of rescue teams instantly used specially trained dogs and sonar cameras in their operation to rescue survivors. Additionally, the workers tunneled from an underground car park below the building to reach victims.

Storm and Constant rain are Complicating the Rescue Operation

Miami-Dade Police Director Freddy Ramirez told reporters that fire and rescue teams are in there with trained dogs and search equipment. They work over nightly to rescue people from the collapsed building debris. Search teams detected banging sounds, but they didn’t listen to human voices from the tons of debris. However, officials say the rescue efforts are dangerous as further debris could collapse on top of them.

Miami-Dade Fire Rescue assistant fire chief Ray Jadallah said that they get wreckage falling on them when they started breaking structure parts. Storms and constant rain are also complicating the rescue operation. Health authorities started taking DNA samples from relatives of those still missing in the tragedy. Relatives of the missing persons gathered around a community center near the mishap, waiting for details and fearing the worst.

What Caused the Collapse?

An eyewitness described hearing thunder before sighted a gigantic cloud of dust as the result of the building collapse. Another eyewitness compared the scene to the 9/11 2011 attacks on the Twin Towers in New York. A full investigation will start after the rescue operation. The building constructed in 1980, and it was due to its standards forty-year review. Officials said that the collapsed building was experiencing its recertification process and required necessary repairs.

Florida researchers at Florida International University published a study last year that found the building had been sinking at a rate of 2 millimeters yearly in the 1990s, which affected the structure of the building. However, the author warned that the study was only a snapshot in time. Additionally, the collapsed building constructed on a reclaimed wetland in 1980 and, according to experts, is an ongoing concern as the land beneath can dense over time, leading to shifts.

Professor Shimon Wdowinski, the author of the study, told the Miami Herald newspaper on the sinking that they saw much higher than that, but it remained fine because most of the area was steady with no signs of subsidence. Further, he adds that the research not meant to suggest certainty about the latest building collapse incident.