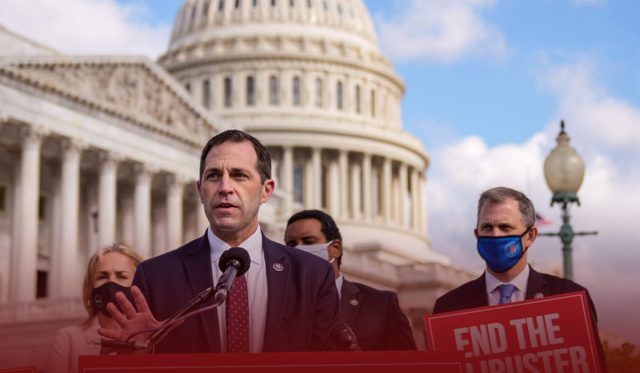 Almost five hundred Democratic state lawmakers are urging congressional leaders to approve federal voting rights legislation to combat the efforts of the Republican state lawmakers to impose new restrictions, saying in an open letter to their GOP colleagues refuse to act in good faith and they required national interference – even as a planned vote on Tuesday on sweeping voting rights bill is nearly sure to fail.

In the letter, the representatives wrote to the leader of Congress that the rash of state-level voting restrictions now approved by Republican legislators countrywide is matchless and poses a huge risk to the democracy that will lead to solid harm to communities that are not represented for a long time. More than four hundred and eighty representatives signed the letter from all fifty states of the U.S. Texas State Representative Trey Martinez Fischer was leading the letter.

Representatives wrote that the U.S. democracy is in the balance, and they called on Congress to approve the For the People Act bill, a sweeping voting rights bill imposing several reforms, and the John Lewis Voting Right Act bill that requires states to pass from the federal government before they change their voting rules.

The letter was sent to Senate Majority Leader Chuck Schumer and House Speaker Nancy Pelosi and also to Minority Leader Kevin McCarthy as well as Senate Minority Leader Mitch McConnell. Moreover, the lawmaker wrote in the letter that they repeatedly tried to work with GOP colleagues to set policies that securely and safely expanded voting access – but in response, they refuse to act in good faith.

This year 389 State Bills Imposing Restrictions Introduced until 14th May

According to the Brennan Center for justice, around three hundred and eighty-nine state bills imposing restrictions introduced this year in forty-eight states. Former President Donald Trump and his allies’ groundless accusations of extensive voter fraud in the 2020 U.S. General Election fueled Republican’s efforts to impose new restrictions on behalf of election integrity.

Of those 389 bills, twenty-two laws passed in fourteen states, including key battleground states such as Arizona, Florida, Georgia, and sixty-one bills are moving through legislatures in eighteen states. Furthermore, the Senate will vote on Tuesday on the For the People Act bill – it would impose a wide-ranging reform as expanding early voting, making it comfortable to register to vote, directing no-excuse absentee voting, overhauling election campaign funding rules, and upgrading the security processes of the election.

Along with the lawmakers, over seventy companies – including Ben & Jerry’s, the National Hockey League, and Patagonia – also urged representatives to approve the bill, part of a wider wave of disapproval from corporate America against the Republican-led effort pass new voting restrictions.