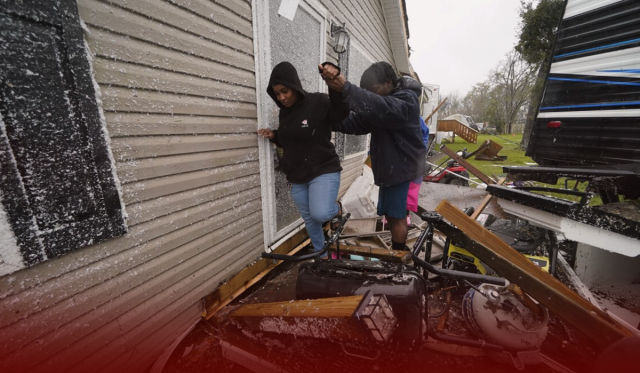 An extensive and volatile storm system swept across the country and killed at least three people in Louisiana, generating tornadoes throughout the state from north to south, including New Orleans, where a spectacular tornado hit in March, and Hurricane Ida hit in 2021. Additionally, this large system subjected other parts of the Great Plains to blizzard-like conditions. By Wednesday night, more than 40,000 power outages had been reported throughout Louisiana by authorities.

At least three people have been killed in Louisiana after a powerful and volatile storm system ripped across the country, with tornadoes battering the state from north to south. This includes the New Orleans area, where a tornado in March and Hurricane Ida struck back in 2021. pic.twitter.com/4QhVBAfcHV

The storm killed a mother and son in the state’s northwest region the day before Wednesday as it barreled eastward. Furthermore, the system produced a tornado that killed a woman in St. Charles Parish in southeast Louisiana and a second that caused severe damage in New Orleans and nearby Jefferson and St. Bernard parishes, including areas that a tornado had badly damaged in March.

Catastrophic Damage Across the State

According to Collin Arnold, the city’s emergency director, a large portion of the damage was attributed to wind damage in New Orleans. During the collapse, one home collapsed. He said four individuals were injured in that incident, adding, “The last word we received was that they were in stable condition.” Similar damage was reported nearby. In a statement released from the Jefferson Parish Sheriff’s Office in its large suburb west of New Orleans, the Jefferson Parish Sheriff’s Office told the press that numerous homes and businesses had suffered catastrophic damage. Among the buildings heavily damaged by the storm was the sheriff’s office’s training academy.

Sheriff Jimmy Pohlman said the tornado damage occurred about two miles south of St. Bernard Parish, where the March twister caused devastation. However, despite several roofs being blown off or damaged, the damage was less than the March tornado, according to Parish President Guy McInnis. On Wednesday, a suspected tornado struck Killona along the Mississippi River, causing damage to homes in St. Charles Parish, west of New Orleans.

Approximately eight people were hospitalized with injuries, according to the report. Sheriff Greg Champagne said the woman was killed outside the residence, so he is unsure what caused the incident. A great deal of debris was scattered all over the place. It is possible that she was struck by a vehicle. It is not certain. However, this was an extremely violent and horrific tornado.” A tornado struck Keithville, south of Shreveport, about 280 miles away, sweeping away the mobile home of a mother and her child, leaving the two bodies missing for several hours.

The house you are searching for is not there, so where are you searching? Although he toured a mile-long path of destruction in rural Keithville, Gov. John Bel Edwards highlighted emergency responders’ challenges. Early in the day, he issued a declaration of emergency. Nikolus Little, 8, was found dead in some woods across the street from his home late Tuesday night, while Yoshiko A. Smith, 30, was found dead under storm debris early Wednesday morning, according to the Caddo Parish Coroner’s Office.

Casey Jones, a deputy with the Caddo Parish Sheriff’s Office, stated that the boy’s father had gone for groceries prior to the storm. “He had just gone shopping for his family when he returned home to find that his home had been destroyed,” states Jones. From north to south, Louisiana was battered by storms. For example, approximately ten homes were destroyed by a tornado Tuesday night in Union Parish, near the Arkansas border.