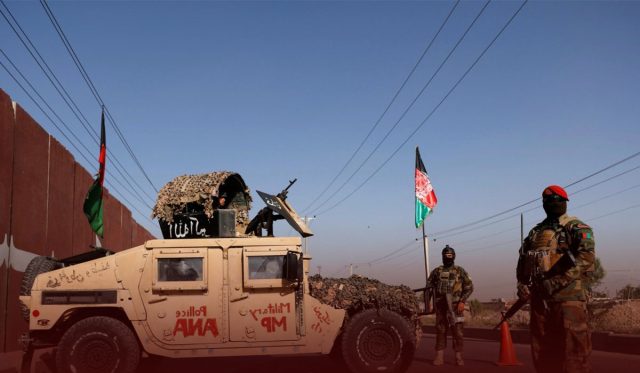 On Monday, a source at the television channel and radio station told CNN that the Taliban captured a TV channel in the strategic Helmand province of Afghanistan. The latest seize from the Taliban mark the newest series of advances by the terrorist group in the state. However, the TV Afghanistan and the state-run Radio operated the Helmand television channel. The location of the TV station is in the capital of Helmand province, the city of Lashkar Gah.

Local journalists say there is nothing currently being broadcasted on Helmand Radio and TV.

According to the local journalists of Lashkar Gah, at the moment, the channel is broadcasting nothing. Taliban spokesperson Zabiullah Mujahid also confirmed to CNN a text message that they had taken over the TV channel. On the other hand, a senior Afghan security official said on Monday that the latest move came from the Taliban at a time when the United States increased airstrikes against the group on many key provincial capitals in Afghanistan to back the advances of militants.

Additionally, the official stated that during the last seventy-two hours, United States airstrikes targeted the positions of Taliban across the cities of Kandahar, Lashkar Gah, and Herat. The official added that they attack multiple times when the Taliban aim to enter the city and the state officials considered the three cities in danger from the insurgence of the Taliban group. Recently, U.S. officials confirmed that American airstrikes are again active in Afghanistan but denied sharing further details of targets.

At the weekend, there was heavy fighting between the Afghan government forces and the Taliban at Lashkar Gah. CNN contacted the local Afghan reporter, and they told it that the Taliban now controls many districts in the city. In addition, Lashkar Gah has many strategic routes in all directions, including the highway between Herat and Kandahar and key agricultural areas to the south of the city.

Herat province also experienced heaving fighting between the Afghan forces and the Taliban. On Sunday, the Defense Ministry tweeted that hundreds of special forces troops arrived in Herat province to increase offensive operations and defeat the Taliban in Herat. According to the ministry, the security situation in the state will improve soon. The Interior Ministry of Afghanistan also expressed about the situation in Herat and said that Deputy Interior Minister General Abdul Rahman Rahman arrived in the city with special police forces.

The Situation in Afghanistan is Worsening

The defense officials of Afghanistan detailed an evaluation of the current situation on Monday and told CNN, “It is not going well.” Furthermore, the Afghan military forces reinforced its presence in Lashkar Gah city on Saturday by bringing more troops of special forces, and it also carried out airstrikes against Taliban positions. If the Taliban group captured Lashkar Gah, it would be the first of the thirty-four provincial capitals of Afghanistan to be captured by the group.

However, the Taliban surrounded many other areas, which also controls many key highways all over Afghanistan. According to the latest report from the Afghanistan Independent Human Rights Commission (AIHRC), the terrorist group Taliban killed around forty people since 16th July in Spin Boldak district of Kandahar province.

The commission said its findings of the recent situation revealed that the Taliban strike back against the former and present government officials and residents who greeted security forces of Afghanistan during the recapture of Spin Boldak district on 14th July. Whereas the Taliban killed twenty-two members of the Afghan special forces that same week as they tried to surrender.