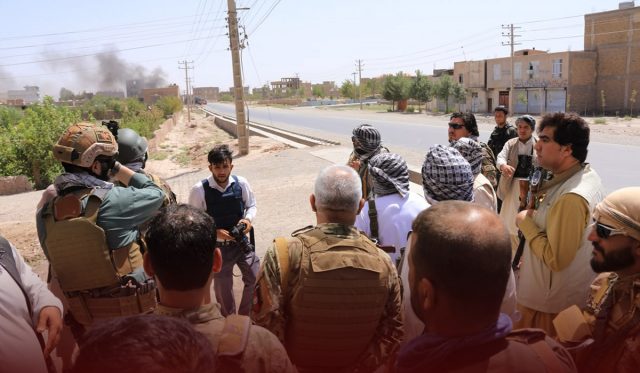 On Sunday, the Taliban takeover all government buildings of key northern Afghan cities of Kunduz province. Likewise, the Taliban fighters also seized another provincial capital after struggling to fight with the Afghan forces. These advances from the Taliban were the most recent in a series of setbacks to government forces as American troops complete their withdrawal after approximately two decades of combat operation in the country.

The Taliban have captured the key northern provincial capital of Kunduz, making it the fifth to fall under their control.

Here’s why Kunduz city is of strategic importance pic.twitter.com/BnE3NHGYd2

A video circulated on social media platforms reveals that the militant group flies their flag in the central square of Kunduz city. It was the 4th provincial Afghan capital to mainly succumb to Taliban terrorist group in less than seven days, as they accelerated a push across the regions of the country and initiated a killing campaign in Kabul.

Moreover, two provincial council members stated that the Taliban fighters seized the police headquarters and the governor’s office after one day of firefights. They also took control of the main prison building containing five hundred prisoners, including Taliban fighters. The capture of Kunduz would be a significant achievement for the Taliban group. At the same time, it is a test of their ability to capture and retain territory in their campaign against the Western-backed government.

It is one of the largest cities of Afghanistan, with a population of over three hundred forty thousand. It was a key area that the Western forces defended against the Taliban over the years. The Councilman, Ghulam Rabani Rabani, stated that the continuous fight was happening at the airport while some other parts of the city are still under governmental control. Kunduz is a tactical crossroads with easy access to many northern Afghanistan and Kabul, 335 kilometers (around two hundred miles) away.

Mohammad Yusouf Ayubi, another provincial council member from Kunduz, said that the poor and innocent Afghanis must pay the cost of the war in Kunduz and other country regions, both Taliban and the government forces are the enemies of civilians. One does not care about the safety of people, and the other cannot provide security to them. But the Afghan government disagrees that it has lost control of the northern city, which would be the 4th provincial capital that the Taliban overrun in the last week.

Mirwais Stanekzai, the spokesperson of the Interior Ministry of Afghanistan, said that government security forces continue to combat the Taliban, and they already recapture some areas from the Taliban. According to a senior government official, senior officials from the State Department, the White House National Security Council, and Defense Department were in communication with the United States embassy officials in Kabul to assess the deeper impact of the fall of Kunduz and showed their deep concerns.

However, the official indicated that the Biden government remains resolute in executing its plan to end the United States war in Afghanistan by the month-end despite the increasingly strategic gains of the Taliban. In recent days, White House officials raised their deep concerns about reports of retaliation against Afghan civilians in Taliban-captured areas. Officials also slammed the killing of the chief of the press operations of the Afghan government for foreign and local media, Dawa Khan Menapal, as well as the car bombing that targeted acting Defense Minister Bismillah Khan Mohammadi.

Jen Psaki, the White House press secretary, stated on Friday that the latest surge in attacks ran counter to the claim of the Taliban to want global legitimacy and offered that the Taliban fighters don’t have to stay on this route. The militants also overran the capital of Takhar province, Taleqan, on Sunday, and it lies next to Kunduz. It is a city of around two hundred thousand people and has a specific significance for the anti-Taliban northern alliance fighters who joined the United States-led coalition to overthrow the religious militia in 2001.