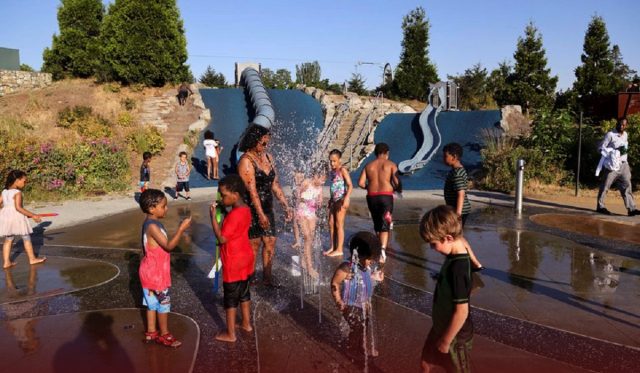 According to the National Weather Service, some areas of Portland, Oregon, hit 108 degrees on Saturday, the recent rise in temperature break the previous record of 107 degrees set in 1965 and 1981. Seattle, Washington, recorded its 2nd-highest temperature on Saturday, hitting 102 degrees in parts of the city.

According to the National Weather Service (NWS), both cities expected to continue facing record-breaking temperatures into the week. Furthermore, on Sunday, forecasts show Seattle reaching a record 104 degrees, and Portland will possibly break a heat record for consecutive 2nd day. Officials warned that the temperatures in the Northwest, between twenty and thirty degrees greater than the average, pose a risk to people who are not ready to deal with the unusual heat.

🥵🌡️ A dangerous heatwave is impacting the Pacific Northwest and into southern California. More than ONE HUNDRED record high temperatures are forecast this weekend through Thursday.

Excessive Heat Watches and Warnings
have been issued.
Your forecast at: https://t.co/VyWINDk3xP pic.twitter.com/oByaW5KRdC

Both Oregon and Washington relaxed COVID-19-related restrictions on cooling centers to allow individuals to take relief from the heat, while administrators are encouraging citizens who have air conditioning facilities will invite others over to help them cool off. According to CNN, around twenty million people are under heat warnings or advisories along the West Cost.

Weather experts are expecting more heat waves as climate change continues to have a deep impact on weather patterns. A University of Washington professor who studies public health and global warming told the Associated Press that they came to know with the evidence across the world that climate change is escalating the frequency, duration, and intensity of heatwaves.

Heat Dome in the Region

According to the latest statistics from the National Oceanic & Atmospheric Administration (NOAA), the extraordinary heatwave came from a heat dome – when high-pressure circulation traps hot air in a specific area. Professionals concerned the heat, paired with an existing deficiency, could surge the possibility of wildfires, while other experts say increased air conditioning could generate a power demand that could strain state power grids.

Moreover, the National Weather Service predicts a high of 112 degrees on Sunday in Portland that will be going to be even hotter than one day before. However, the worst is still to come. Monday is the hottest day for the big cities of Portland and Seattle, with all-time record highs expected in both cities.

Salem likely to reach 106 or 107 degrees and Portland at 112, even though Eugene could experience temperatures fall to 98 degrees. According to the National Weather Service, Seattle expected to hit a hundred to one hundred and fifteen degrees. Most of both states are under extreme heat warnings until late Monday. Between ten years from 2004 to 2018, an average of around seven hundred people died from heat-related causes every year in the United States.