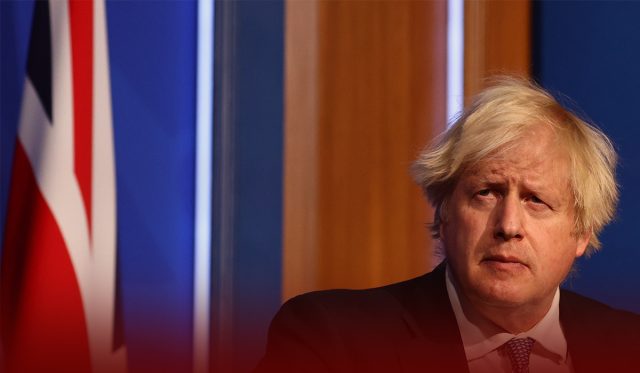 The United Kingdom Prime Minister Boris Johnson declared an Omicron emergency in the country. He announced that coronavirus vaccine booster shots would be eligible for everyone over eighteen in England from this week. In a televised statement, Johnson said on Sunday evening that nobody should be in any doubt; there is a tidal wave of Omicron variant coming.

His administration set a new target to administer boosters to all adults who want them by the year-end. Furthermore, medical experts also postponed some medical appointments to focus on boosters. The prime minister announced the update on Sunday evening, some hours after the country’s Coronavirus alert level raised to four amid the spread of the latest Omicron variant.

It’s fantastic to see so many people answering our call to #GetBoostedNow – over 110,000 people booked before 9am this morning.

If you’re 30+ you can book online now, and all adults will be able to do so from Wednesday. So don’t delay – Get Boosted Now.

Level four of the virus signifies a rising or high level of transmission – and the last time the United Kingdom was at level four was in May of this year. Moreover, Johnson is afraid that the country will face an emergency fighting with the new variant. Two doses of the coronavirus vaccine are not enough to give the protection level all humans need.

A Booster Dose Can Level of Protection Against Omicron

However, scientists are confident that the booster dose can bring the level of protection back up. Boris Johnson added that scientists couldn’t say Omicron is less severe at this stage. The new third dose target means people aged eighteen and over in England will be able to get their booster jabs from this week – if it has been three months since their second shot.

Residents aged thirty and over can already book an appointment in advance using the federal online service two months after their second shot. Likewise, eighteen and move will be able to book their appointment from Wednesday. Depending on the location, some walk-in appointments will be available from Monday for eligible over-18s.

In the same way, Scotland is setting the same goal and intending to offer all adults a booster dose by the year-end, and Northern Ireland said that it is speeding up its rollout and hopes to get as many individuals as possible. However, Johnson said that some other medical appointments would need to postpone to the New Year to reach the new booster target.

Preliminary statistics reveal that getting an additional shot prevents around seventy-five percent of individuals from getting coronavirus symptoms from Omicron. Over half a million extra doses and third shots were administered in the United Kingdom on Saturday. On Sunday, the U.K. health officials recorded 1239 new Omicron cases, which brings the total number of the kingdom’s new variant cases to over three thousand – although the real number is likely to be much higher.

Sir Keir Starmer, the labor leader, reiterated the prime minister’s call to receive a booster shot. Let’s keep our foot on the pedal and get the U.K. boosted to protect NHS, friends, and families. NHS Providers, which represents NHS hospitals, community, mental health, and ambulance services, said the booster campaign offered a chance to contain the impact of the new variant but added the NHS was already beyond a full stretch.

Northern Ireland and Scotland already opened up booster shots to more than thirty, and those aged eighteen to twenty-nine in Scotland can receive their booster shots from later this week. Nicola Sturgeon, the First Minister, said Scotland had the highest rate of third shots of all the United Kingdom countries – but warned it was possible that additional actions might require in the weeks ahead.