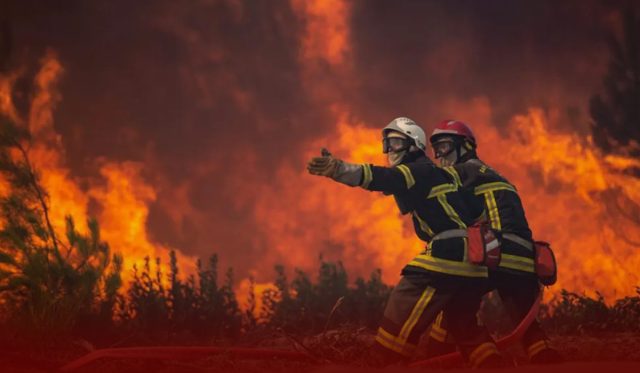 For the first time in history, the United Kingdom (U.K.) recorded temperatures of more than 104F (40C). According to the weather reports, thermometers hit 40.3 degrees centigrade at Coningsby in Lincolnshire, while three other locations surpassed Britain’s past highest temperatures of 38.7 degrees, set in 2019. After a surge in fires, many fire services of the Kingdom declared significant incidents.

The United Kingdom had its first ever day with temperatures more than 40C (104F), according to The Meteorological Office. At Coningsby in Lincolnshire, a county in the East Midlands of England, thermometers hit 40.3C. #UKtemperature #LondonFire #40degrees #Lincolnshire pic.twitter.com/N9AJgjc3gy

The Home Secretary of the U.K. Priti Patel said that she had been updated on the dangerous fires and pressed the public to pursue safety advice from their local fire service. In the capital, rescue officials took two smoke-inhaled people to the hospital after a fire in the East London area, Dagenham. Jonathan Smith, London Fire Brigade assistant commissioner, said tinderbox conditions caused some of the fires in the city.

A Temperature Record in Scotland

Local officials warned individuals to stay careful around water as around five people died in and across the water during the last two days. Due to the extreme heat wave, Network Rail warned to travel unnecessarily because road surfaces warped. On the other hand, several power cuts were reported in the area. Overheating transformers and sagging conductors caused issues with the power network in the North East, Yorkshire, and Lincolnshire.