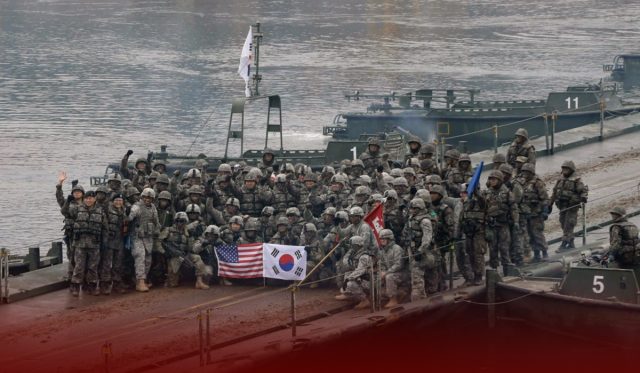 On Monday, the United States troops and South Korea started their most extensive joint military exercises – a show of force likely to raise tensions with a hostile North Korea. The military drills, known as Ulchi Freedom Shield, are taken as a sign of the determination of allies to resume extensive training after they canceled some regular exercises and scaled-down others to facilitate nuclear dialogs and because of the Coronavirus outbreak.

On Monday, the United States and South Korea started their largest joint military exercises with a recommencement of field training as they sought to strengthen readiness over the North Korean likely weapons tests. #USMilitaryDrills #Militarydrills #USKoreadrills #NorthKorea pic.twitter.com/EvCKLetdP4

However, the allies didn’t release the details of the operation, but previous exercises involved a large number of troops and a significant number of tanks and aircraft warships. Additionally, they will reportedly include simulated joint military attacks, removals of mass destruction, and war zone reinforcement of arms & fuel. In a joint statement, both militaries said that the military exercises were a response to an enlarged scale and volume of North Korean missile tests during the last year.

The statement added that considering the evolving threat, both countries committed to expanding the scale and scope of joint military drills and training. It further said that Ulchi Freedom Shield would strengthen combined readiness. Furthermore, the officials canceled the 2019 military drills after former United States President Donald Trump’s first meeting with Kim Jong-un, the North Korean leader, in Singapore. The former president’s surprise concession was perceived as an effort to influence Kim to stop his nuclear weapons program amid a spell of diplomacy.

Yoon Suk-yeol, the new President of South Korea, took office in May this year, vowing a harder line against the provocations of North Korea. He promised to normalize the military drills and boost the defense of the country against North Korea. The recommencement of the exercises suggests that the United States and South Korea have returned to the most muscular displays of their collective military might following the North’s resumption of ballistic missile tests.

The defense ministry of South Korea said that the significance of the combined military exercises is bolstering the United States-South Korean alliance and coagulating the combined defense posture by standardizing joint drills and field training. Similarly, the allies insist the field drills are announced to plan their response to a North Korean attack. Moreover, the drills will end on 1st September and are started against a progressively hostile reaction from North Korea.

Last month, during a televised interview, the deputy director of a think tank, Choe Jin, said that South Korea and the United States would face extraordinary security challenges from the North unless they stop their military stance against them, including the combined military drills. In addition, this year, North Korea conducted more than thirty ballistic missile tests to pressure the U.S. to accept its status as a legal nuclear power. On the other hand, some experts believe that the North could launch a nuclear strike against the United States mainland.