Home Updates Turkish Targets 300 Meters from US Forces with Airstrikes 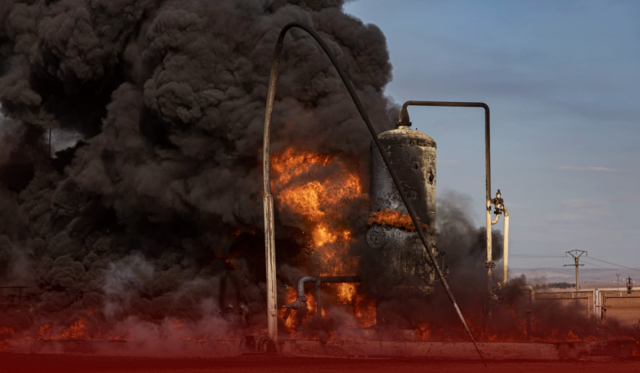 Turkish airstrikes launched in support of Ankara’s new offensive against Syrian Kurdish fighters came within inches of striking U.S. forces in northeastern Syria, deepening tensions. In its initial acknowledgment of Tuesday’s strike, U.S. Central Command said it was unaware of any U.S. personnel at the base, overseen by approximately 900 American troops in Syria tasked with fighting the Islamic State terror group.

A Turkish airstrike launched in support of the Turkish offensive against Syria’s Kurdish fighters was uncomfortably close to hitting U.S. troops in some areas of northeastern Syria, thus further escalating tensions in the region.#Turkey #TurkishAttack #Syria #Kurdish #USTroops pic.twitter.com/LLiHFq3Cz6

An official with the Defense Department confirmed late Wednesday that U.S. troops had entered the area within 300 meters of Hasakah. VOA also reported that U.S. forces were based in another building within the compound, which is part of a larger compound. In a statement released late Wednesday, U.S. military officials acknowledged the severity of the incident but declined to provide additional details. However, a Pentagon spokesman has advised that several airstrikes conducted recently in Syria directly threaten the safety of U.S. personnel working with local partners to counter ISIS and guard more than 10,000 detainees.

The situation must be de-escalated so that the mission to defeat ISIS can remain on track and maintain the safety and security of all personnel on the ground,” he stated. Turkey and our local partners will continue discussions regarding the maintenance of the cease-fire agreement. According to SDF officials, a U.S.-trained member of the SDF’s counterterrorism forces was killed in Tuesday’s airstrike.

Earlier this week, a spokesman for the SDF told VOA that U.S. troops had conducted aerial surveillance of the area just five days earlier from the base itself. Following repeated calls from U.S. officials for the Turks and the Syrian Kurds to pull back, the United States revealed that the Turkish airstrike had directly endangered U.S. personnel. In a telephone talk with his Turkish counterpart on Wednesday, General Mark Milley, the U.S. Chairman of the Joint Chiefs of Staff, General Mark A. Milley emphasized the importance of maintaining communications.

Last week, Turkey launched its latest offensive against the Syrian Kurds, Operation Claw-Sword, alleging they were responsible for an explosion in Istanbul that killed at least eight individuals and injured dozens more. However, neither the Syrian Democratic Forces (SDF) nor the People’s Protection Units (YPG), a Syrian branch of the Kurdistan Workers’ Party terrorist organization, have accepted responsibility.

According to Ankara, the Kurdish-led SDF and YPG are a single organization, as many of their fighters overlap. The United States government views the Kurdish-led SDF as an important ally against the Islamic State and distinct from the YPG. “Turkey continues to be a target of legitimate terrorist activity, particularly to its south,” John Kirby, director of strategic communications for the NSC, told Syria TV on Tuesday.

They have the right to defend themselves and their citizens. Their citizens and themselves are certainly entitled to self-defense. The Pentagon, however, expressed concern that the Turkish offensive would be more harmful than beneficial in the long run, as Kirby did. “It may force some of our SDF partners to act in a manner that restricts their ability to continue to fight against ISIS. … I believe it is still a credible threat,” he explained.

In an interview with VOA Wednesday, the SDF indicated that those fears were already beginning to materialize. “Our forces cannot continue pursuing ISIS cells because they are preoccupied with combating the Turkish occupation,” SDF Commander Mazloum Abdi said in a statement provided to VOA. “It is necessary for us at present to concentrate on combating Turkish aggression,” he concluded.

VOA spoke with other SDF officials, who stressed that the change in posture does not constitute a policy change or the cessation of anti-IS operations, explaining that the SDF must prioritize defending itself against Turkish airstrikes as well as possible Turkish ground assaults. The SDF further accused Turkey of supporting I.S. through its actions.

Several families escaped the al-Hol displaced-persons camp in northeast Syria thanks to Turkish air strikes on Wednesday, according to Syrian Democratic Forces spokesperson Farhad Shami. In a statement, he stated that six individuals, including three women, had been recaptured. Further, the SDF claims that Turkey has targeted civilian infrastructure, including homes, hospitals, and schools. As a result, it has killed at least 15 civilians since its offensive on Saturday.

The Turkish government rejected allegations made by the SDF on Wednesday. Turkey’s Embassy in Washington stated that the PKK/YPG have long been responsible for hindering infrastructure in civilian areas in Syria and Turkey and that Syrian Kurdish forces have attacked civilians directly. “PKK/YPG continued their cross-border attacks on schools, kindergartens, and residential areas by using rockets and mortars, which resulted in civilian casualties, such as teachers and students. Turkish officials further stated that the group collaborated with I.S. in staging attacks on Syrians west of the Euphrates.”

It is reported that the Turkish military offensive has killed over 180 militants, and Turkish Leader Recep Tayyip Erdogan has indicated that the military campaign will be intensified against the Syrian Kurdish militia on Wednesday. “We will continue to carry out air raids while cracking down on terrorists on land whenever it is convenient to do so,” said Erdogan in his speech to members of parliament.

“The Turkish government is capable of identifying, capturing, and punishing those terrorists responsible for attacks on our country and our nation, as well as those who assist them outside our borders,” Erdogan stated. However, a Pentagon press secretary warned late Wednesday that the fighting might spiral beyond calling for immediate de-escalation.

Iraq’s sovereignty is threatened by uncoordinated military action, and we are concerned about reports indicating that governments have deliberately targeted civilian infrastructure. The consequences of these actions have resulted in the deaths of civilians in both Turkey and Syria.