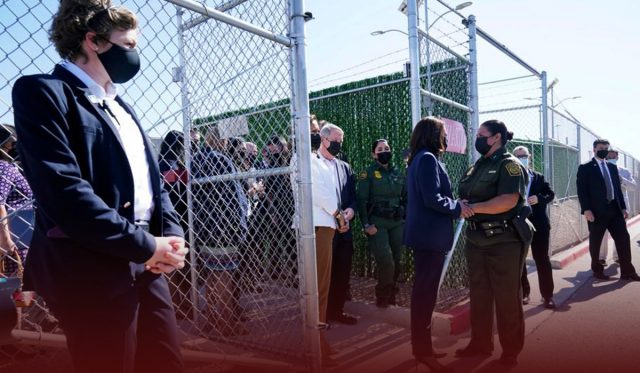 Kamala Harris, the Vice President of the United States, visited the U.S.-Mexico border on Friday as part of Joe Biden’s effort to control the surge in immigrants trying to enter the U.S. while finding the root causes of migration from Central America. As a vice president, that was his first visit to the border. During Harris’s visit to the Paso del Norte Port of Entry, she announced to visit the border. There she saw the processing area for migrants, including a zone assigned for unaccompanied children.

What happens at the border is directly connected to the work we are doing to address the root causes of migration from Central America. As I made clear during my trip to El Paso today, the President and I are committed to strengthening our immigration system at every level. pic.twitter.com/gYm5ZjzBAI

Harris asked a border patrol force agent about the conditions at the border, and the individual replied that the situation improved at the facility during the last two years. Alejandro Mayorkas, the Homeland Security chief, attended the vice president. Harris made a stop at a United States Customs & Border Patrol (CBP) facility before visiting the border and met with Representative Veronica Escobar in El Paso, Texas. She said after arriving in El Paso that she is glad to be there. On the other hand, at the Customs and Border Patrol facility, Harris reportedly met with five young migrant girls.

Earlier this month, Kamala Harris visited Mexico and Guatemala; she openly told migrants not to come to the United States. However, thousands of migrants from those two nations, along with those from El Salvador and Honduras, have been paving a long journey to the border, several on foot, escaping crime and poverty in their motherlands, they say.

Agents at the U.S. border are facing the biggest number of undocumented migrants during the last twenty years. They caught over one lac and eighty thousand at the border just in May; most of them were single adults. The figure was somewhat more than the one lac seventy thousand plus numbers in March and April. Most of those migrants come from Latin America, but a huge amount also comes from Ecuador, Haiti, Venezuela, Cuba, and some African countries.

The surge at the border increased since President Biden and Vice President Harris took office in January. The president said he was adopting what he called a more humanitarian stance on migration than the Trump government. The Democratic president picked Harris to direct efforts to limit the migration by addressing the root causes in Latin America for individuals to leave their homelands.

Joe Biden ended the construction of the border wall under the rule of former President Donald Trump, and unlike his predecessor, who expelled the migrants to their home countries. Instead, Biden is allowing unaccompanied children to enter the United States. However, like Republican Trump, Biden refuses to allow single individuals and families to enter the country.

CBP stated that the average everyday number of children in its custody now decreased to six hundred and forty. In addition, the U.S. health authorities held another sixteen hundred and two hundred migrant children. At the same time, the administration tries to place them with relatives already living in the United States or with vetted caregivers ready to take them into their homes.