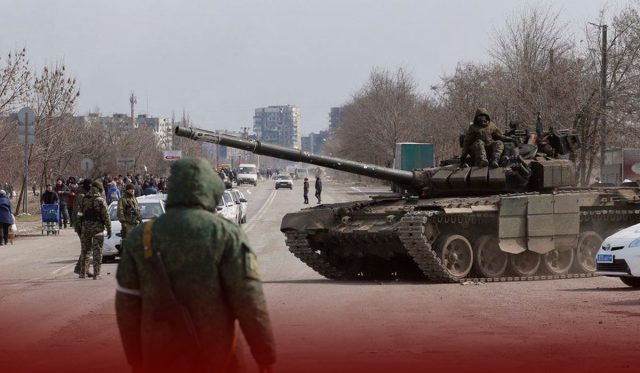 Kyiv officials instantly rejected the Russian demand to surrender in the port city of Mariupol in exchange for offering safe passage out of town. On Sunday, Mikhail Mizintsev, the Russian Colonel-General, said that Russia would allow two corridors out of Mariupol, moving east towards Moscow and west to other areas of Ukraine. On Monday, Mizintsev gave the port city until 05:00 am (02”00 GMT) to respond to the ultimatum.

Further, he said a terrible humanitarian disaster developed in the overwhelmed city, where violence between Ukrainian and Russian forces trapped residents without water, food, or power. He said that all who surrender are guaranteed safe passage out of the town. However, he didn’t clarify what action Moscow would take if Ukraine rejected the offer.

Ukrainian officials rejected a Russian demand offering the people of Mariupol, the port city, safe passage out of the town if they surrender. Instead, under the Russian proposal, they will allow civilians to leave if the defenders of the port city laid down arms. pic.twitter.com/wx7XoW5ocX

On Telegram messaging app, the Russian Ministry of Defense, Sergey Shoygu, addressing Mariupol officials, said the authorities now have the right to make a historic right choice. He also warned that they could face a military trial if they supported what it described as criminals. On the other hand, Irina Vereshchuk, the Deputy Prime Minister of Ukraine, rejected Russians’ demands.

Every House Became a Target of Russians

A city of four hundred thousand people, Mariupol, suffered some of the harshest bombings since Putin attacked Ukraine on 24th February. According to City officials, around twenty-three people died, some buried in mass graves. In addition, Piotr Andryushchenko, the Mayor of Mariupol, rejected the Russian demand to lay down their arms, saying he didn’t need to wait until morning to respond and accuse Russians.

Russian call for surrender came a few hours after Ukrainian officials said the Russian forces bombarded an art school in Mariupol under which hundreds of people were present for shelter purposes. Officials shared no details about any causalities in the school attack. However, during a video address, Ukrainian President Volodymyr Zelensky said that around four hundred civilians were taking shelter at the art school when a Russian bomb hit it.

Further, he added that they are under the debris, and the authorities and rescue officials do not know how many of them survived or dead. However, Ukrainian officials will surely shoot down the pilot who dropped that bomb, just like his forces downed around a hundred other such mass assassins. Likewise, a bomb struck a theater on Wednesday where over one thousand people were believed to be under shelter.

Since Friday, the Ukrainian authorities had not shared any update on the search of the theater when they announced to rescue almost one hundred and thirty civilians, while over thirteen hundred were trapped under rubble.

Russian attacks blocked the previous efforts to evacuate civilians in Mariupol, even though local officials say that thousands of residents were able to leave the city on private vehicles. According to the Sunday statement of Vereshchuk, around four thousand people fled from Mariupol to Zaporizhzhia. Furthermore, the government plans to send around fifty buses on Monday to pick up further evacuees from the city.

Zelensky said that the Russian military blockade amounts to a war crime. He said that it is an intentional tactic of Russian forces. Mariupol’s location on the Sea of Azov makes it a strategic target for the Russian military. It would help forces create a land corridor between the eastern regions of Luhansk and Donetsk, controlled by Crimea and Russian-backed separatists, which Russia annexed in 2014.

Lloyd Austin, the United States Defense Secretary, told the Face of the Nation of CBS that he thinks the Russian military is restoring to these brutal civilian attacks because Ukrainian forces stalled its armed campaign. Additionally, he said that the Russian troops all over Ukraine have been ineffective as the Ukrainian military continues to resist Russian troops with NATO and United States provided weapons.

Read Also: US and Chinese Presidents to Discuss Russia’s Invasion of Ukraine