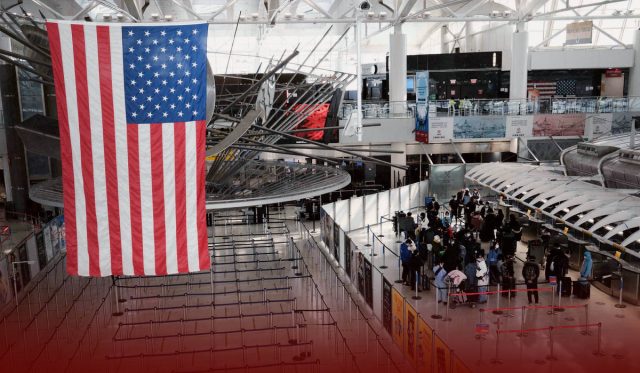 The United States announced to prohibit travel from eight southern African countries, including South Africa, in an effort to block a new COVID-19 variant, such as Omicron, to spread there. From coming Monday, only U.S. residents and citizens will be permitted to travel from the region. It follows a similar travel ban from the United Kingdom and Canada, the European Union. Biden announced the move as a precautionary measure on Twitter.

The @WHO has identified a new COVID variant which is spreading through Southern Africa. As a precautionary measure until we have more information, I am ordering air travel restrictions from South Africa and seven other countries.

The World Health Organization named the new variant Omicron and declared it to be of global concern. Furthermore, the U.S. officials said they blocked flights from Monday from South Africa, Eswatini, Botswana, Namibia, Malawi, Zimbabwe, Lesotho, and Mozambique. Joe Biden, the President of the United States, called the move a preventative measure until scientists find more about the variant.

Canada is also closing its borders for foreign travelers who recently visited South Africa, Botswana, Mozambique, Namibia, Eswatini, Lesotho, and Zimbabwe. Furthermore, there will be no permission to enter Canada if foreigners visit the seven countries in the last fourteen days. South Africa first reported the Omicron variant to the WHO on 24th November. Since then, the variant spotted in other countries.

The Health Minister of South Africa slammed the rush to impose new restrictions regarding travel and called them unjustified. Scientists said that they still have much to learn about the latest mutations of the virus and the world health agency said that it will take some weeks to understand the impact of the new variant, as experts work to find out how contagious it is.

On Friday, the World Health organization said initial evidence suggested the new coronavirus variant carried a greater risk of reinfection than previous variants. Scientists explained it as the most heavily mutated version yet, which means coronavirus vaccines may not be as effective. In addition, the WHO says that until now, health officials reported less than a hundred sample sequences. Most of the cases were confirmed in South Africa but also detected in Belgium, Israel, Hong Kong, and Botswana.

Whereas in South Africa, most of the cases reported in its most populous province, Gauteng. However, the WHO warned against nations rapidly imposing travel restrictions and said they should look at a scientific and risk-based approach. However, health officials in the Netherlands warned that two passengers on KLM Royal Dutch Airlines flights from South Africa to Amsterdam likely infected with the new variant. Airlines for America said it was in contact with the American government, as details remain unknown now.

A senior government official said that the U.S. administration could add nations to the ban list if the variant spread in those countries. United Airlines and Delta Airlines both fly to South Africa. Furthermore, the U.S. set to resume nonstop flights from Newark to Cape Town on 1st December. Shares of both airliners closed over eight percent Friday. Biden called on countries meeting at the World Trade Organization (WTO) next week to remove IP protections for coronavirus vaccines in the wake of the new variant.

Read Also: The WHO warns Europe at Coronavirus ‘epicenter’ by February