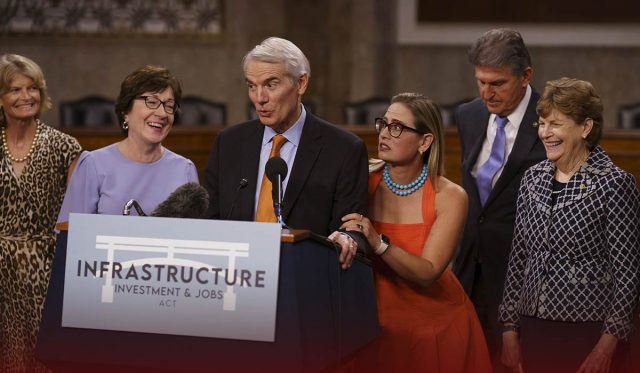 The United States Senate is starting a discussion on a new infrastructure spending package after Joe Biden, the U.S. President and a group of mainstream Democratic and Republican senators reached a pact on it after weeks of conflict over what to include and the procedure pay for it.

On Wednesday, the White House declared that the approximately one trillion dollars package, including $550 billion in new allocations, would add around two million jobs to the United States economy every year for a decade. Several of those allocations will be in construction work to repair the deteriorating roads and bridges of the country, improving water and transportation infrastructure, and build new broadband connections in rural areas of the United States.

Senate Voted 67-32 to Continue the Debate

The Senate voted 67-32 on Wednesday evening to continue the debate and votes on revisions to the legislation in a rare show of bipartisanship, even though the final general congressional passage of the move could be weeks away. Biden tweeted that this agreement signals to the world that the U.S. democracy can function. He adds that his government will once again transform America and drive the country into the future.

The Bipartisan Infrastructure Deal signals to the world that our democracy can function, deliver, and do big things. As we did with the transcontinental railroad and the interstate highway, we will once again transform America and propel us into the future.

Moreover, the White House said the package, one of the most significant legislative priorities of the president, will grow and develop the economy, create good jobs, enhance competitiveness, and make the U.S. economy more resilient, sustainable, and just. While the U.S. President had reached a basic deal with five Democratic and five republican centrist representatives one month ago, the White House negotiators and lawmakers deadlocked over how much to spend on specific forms of infrastructure.

The Biggest-ever Federal Investment of $39 billion in Public Transit

According to the White House, the deal now includes the biggest-ever federal investment of $39 billion in public transit to expand and upgrade bus and rail systems, as well as the biggest-ever spending for passenger rail service since the development of the existing Amtrak passenger rail system in 1971. In addition, the expenditure plan calls on noteworthy expenditures for wastewater infrastructure, clean drinking water, bridges, thousands more electric vehicle charging stations, access for all nationals to high-speed internet, and improvements to the electric grid of the country.

The top Republican negotiator with Democratic leaders, Senator Rob Portman of Ohio, said they now have a deal on the key issues. As a result, both parties are ready to move forward. In addition, the president voiced his endorsement as he toured a truck plant in Pennsylvania. At the visit, he said that he feels confident about it. Six months into his four-year presidency, Joe Biden views the infrastructure plan as especially crucial to show voters that bipartisan agreements can work efficiently in politically fractious Washington.