Home Updates US President Arrived in Europe for Talks with Allies 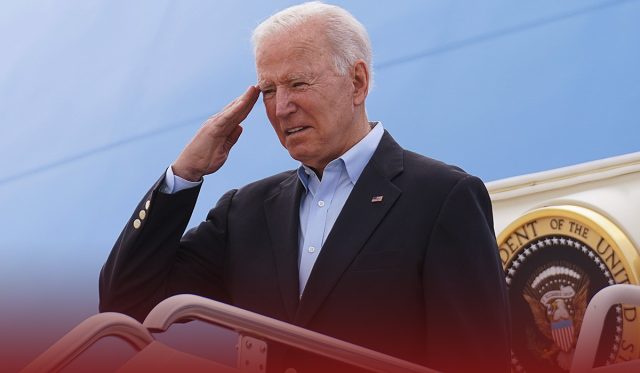 Joe Biden, the U.S. President, arrived in Europe on Wednesday on his first foreign trip as the American leader, set to hold high-level conversations with other Western leaders before meeting next week with Vladimir Putin, the President of Russia, at a summit in Geneva. His first stop was at Royal Air Force Mildenhall in the United Kingdom, where Biden addressed United States troops.

The president said to thank them all the soldiers and airmen and owed their services. Further, he said that the U.S. government is proud of them. Biden also took a swipe at Vladimir, who he will meet later in the trip. Furthermore, he said the U.S. would respond in a meaningful and robust way when the Russian administration engages in destructive activities.

Biden also said he would be encouraging allies about the United States’ role globally. As the president boarded Air Force One, he said his intentions for the trip were solidifying ties with partners while making it clear to the Russian president and to China that the United States and Europe are tight.

The president also said he would announce the latest strategy for vaccinating people across the world against the COVID-19 pandemic. News agencies later reported that the United States would acquire five hundred million more doses of the Pfizer coronavirus vaccine to donate to ninety-two lower-income nations and the African Union during 2022.

U.S. Government Vaccinated More than Half of Its Adult Population

The government of the U.S. vaccinated over half of its adult population, but weaken nations are trailing far behind that level of vaccination. Moreover, the American plan calls for the donation of two hundred million vaccine doses – enough to completely vaccinate a hundred million people – by the year-end, with the remaining sent overseas in the 2022 first half.

As the U.S. president left for the U.K., the White House officials said the trip would highlight the commitments of the country to uniting the democracies of the world, coming together to shape the road rules for the 21st century, defend the values of America and combat the biggest challenges of the world.

The president is holding meetings Thursday with Boris Johnson, the British Prime Minister, before ending the G-7 summit of top industrial countries in Cornwall, Britain, from Friday to Sunday. Furthermore, Biden and first lady Jill Biden are also meeting Sunday with U.K. Queen Elizabeth II at Windsor Castle before leaving for the North Atlantic Treaty Organization (NATO) summit in Brussels on Monday.

Biden will hold separate discussions with Recep Tayyip Erdogan, the Turkish Prime Minister in Brussels – the capital of Belgium, who angered the U.S. by his go-it-alone stance in purchasing air defense system (made in Russia) that is incompatible with the North Atlantic Treaty Organization.

Biden meets with King Philippe of Belgium and Prime Minister Alexander De Croo on Tuesday, as well as he attended a U.S.-U.N. summit. On Wednesday, Biden met with Vice President of Switzerland and Swiss Confederation President Guy Parmelin in Geneva before his possibly disputed sit-down with Putin – the first time both leaders met one-to-one since Biden became president.

Meeting of Biden with Vladimir Putin

The relations of Biden with the Russian president are already tense. Furthermore, the U.S. president held Putin innocent of accusations that Russia interfered in the 2016 United States presidential election to help the election victory of Trump. Contrary to that, Biden directly told the Russian president in an early phone talk with him that the United States holds the Kremlin responsible for election meddling, a huge cyberattack on American government agencies, and the poisoning of Alexey Navalny, the Putin opponent.

Each country expelled some of the diplomats of another country from Washington and Moscow. During a TV interview, the U.S. president also called Putin a killer, a claim Putin instantly turned against America by mentioning the killing of Native Americans in the eighteenth-century settlement of the nation and fatal abuse of minorities throughout its history.