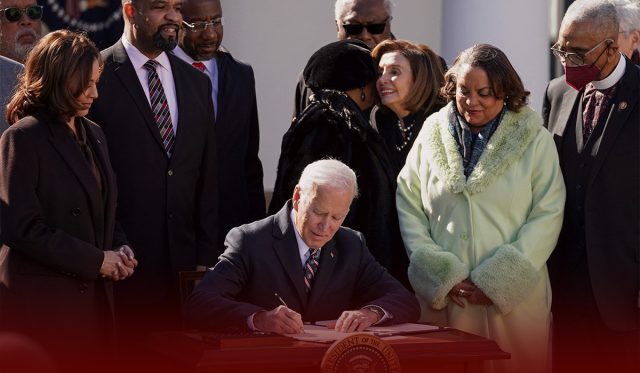 On Tuesday, United States President Joe Biden signed the Emmett Till Antilynching Act into law to make lynching a federal hate crime. The recently signed law follows over a hundred years and two hundred failed attempts by United States lawmakers to approve an anti-lynching bill. The Act was named for the black teenager whose extrajudicial murder in Mississippi in 1955 fueled the civil rights movement.

Joe Biden signed a bill that designates lynching as a hate crime at a national level. Initially, Congress considered an anti-lying bill over one hundred and twenty years ago. However, until March 2022, it failed to approve such legislation approximately 200 times. pic.twitter.com/z1i7cp3NbY

Culprits of a lynching – injury or death resulting from a hate crime – will face up to thirty years in jail. The president appreciated the efforts to approve the legislation and praised lawmakers for never giving up. Biden said that racial hate is not an old problem, but it is a persistent issue. He added that hate never goes away; it only hides.

Earlier this month, Senate approved the bill unanimously. Last month, the House had voted overwhelmingly in support of the bill. Three GOP representatives, such as Andrew Clyde of Georgia, Thomas Massie of Kentucky, and Chip Roy of Texas, voted against the legislation. They argued that it was already a hate crime to lynch individuals in the United States.

What is Lynching and its History in the U.S.?

Lynching is assassination by a mob with no rule of law or due process. All over the United States, white mobs lynched thousands of people, specifically African Americans, usually by torture or hanging, in the ninetieth or twentieth centuries. According to the Equal Justice Initiative, around four thousand four hundred African Americans were lynched between 1877 and 1950. Those people who took part in lynching were usually celebrated and acted with impunity.

Illinois Congressman Bobby Rush, the bill’s sponsor, said ahead of its passage that lynching is an exclusively and longstanding American weapon of racial terror that has for decades been used to maintain white supremacy. After the murder of Black George Floyd by a police officer in Minneapolis, the House approved an earlier reiteration of the bill in 2020, but the Senate blocked it from approval.

On 7th March, the House passed the bill 422-3, with eight members not voting, after Senate approval by united consent. In January 2019, Rush had introduced a bill that the House approved 410-4 before the measure stalled in the Senate. The National Association for the Advancement of Colored People (NAACP) started lobbying for an anti-lynching bill in the 1920s. Eventually, decades after the moment, in the 1990s, federal hate crime legislation was approved and signed into law.