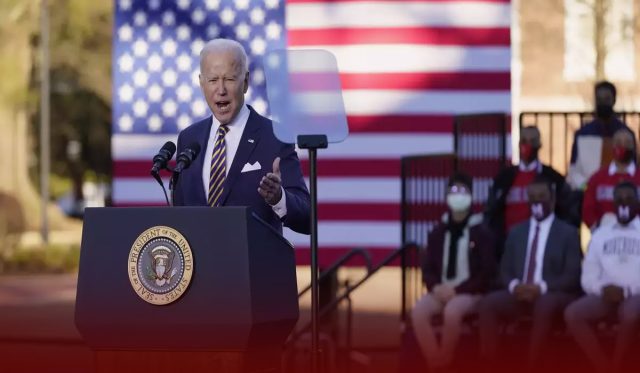 On Tuesday, Joe Biden, the President of the United States, and Kamala Harris, the Vice President, visited the southern state of Georgia to promote the voting rights bill that would significantly expand federal influence over elections. Two bills are a top priority for several Democratic leaders but stalled in the Senate because of the opposition from the Republicans.

The president said they came there to support civil rights and clarify what must come after that terrible day when a dagger was held at the American access throat that invoked the 6th January riot at the U.S. Capitol by supporters of former Republican President Donald Trump trying to upturn the victory of president Biden in the 2020 presidential election.

With only fifty Democratic votes in the hundred-seat Senate and no Republican votes, the president threw his support behind the filibuster carve-out: one-time change in filibusterer rules to approve the two voting rights bills. However, the filibuster is a tradition of the Senate that allows the minority side to prolong debate and prevent or delay a vote. So, the carve-out would allow Democratic Senate members to approve the bill with a simple majority with Kamala Harris as the decider.

Chuck Schumer, the Senate Majority Leader, said he would force a vote on changing those rules of Senate no later than 17th January, the day U.S. nationals celebrate the legacy of the civil rights activist Martin Luther King Jr., The top Republican Senator, McConnell, criticized the move. He said in a Tuesday statement that the Democratic leader at Senate is trying to bully his own colleagues into breaking the Senate, breaking their world, and muzzling millions of citizens’ voices.

The Republican Senator also criticized the president’s speech on voting rights. Further, he added that a sitting president of the country who vowed to unite America and lower the temperature now invokes the terrible racial hatred of Jim Crow discrimination to discredit states whose new voting laws are more evident than in his home state of Delaware.

What are the differences between Democrats and Republicans on voting rights?

In general, Democratic leaders want to make it easier for everybody to vote because many voters tend to yield more Democratic votes. On the other hand, GOP leaders tend to support higher hurdles to voting rights bills, focusing on identifying scams and fraud. The Brennan Center for Justice (BCJ) at the New York University Law School’s statistics reveal that around nineteen GOP-controlled states passed thirty-four laws limiting access to voting in the last year.

The two voting bills the president is advocating include the Freedom to Vote Act, which would cut the impact of GOP-controlled state-led efforts to restrict voting and stop gerrymandering, the procedure in which state lawmakers redraw districts in a way that advocates say favors one class or party. Likewise, the second in the John Lewis Voting Rights Advancement Act would resume some specific anti-discrimination provisions of the Voting Rights Act that undermined in a 2013 ruling of the Supreme Court. But the chances of passing both bills are dim.

At least two Democratic leaders, Senator Kyrsten Sinema of Arizona and Senator Joe Manchin of West Virginia, remain opposed to changing the parliamentary filibuster rule, even for voting rights moves. Biden resisted changes to the filibuster in his approximately forty years in the Senate but now believes change is necessary. Schultz said that Biden will realize now that this is not the same Senate that he was in twenty, thirty years ago where compromise was possible.